14 new faces join the Islanders at the 2019 QMJHL Draft 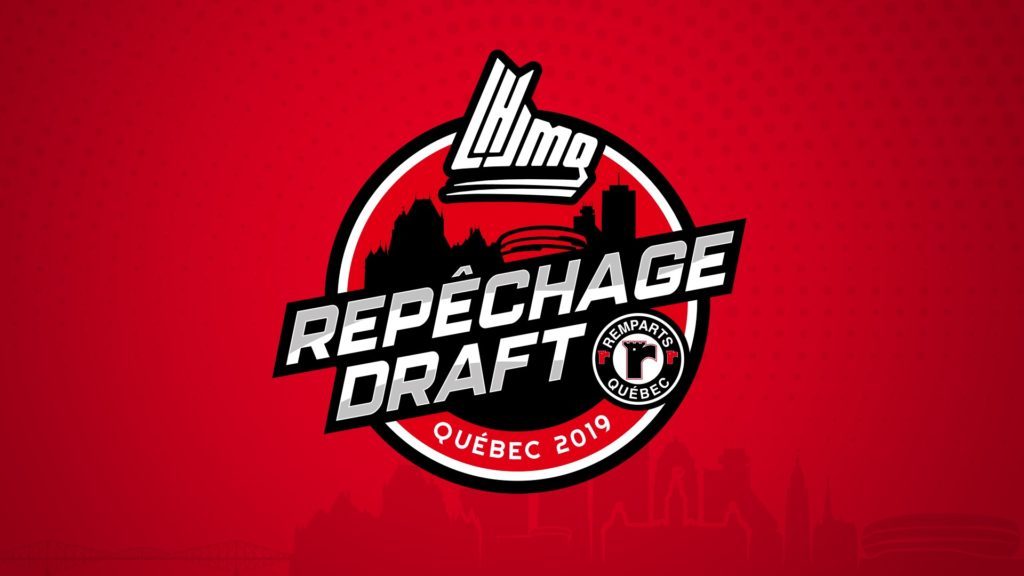 It was a big day for over 200 major junior hopefuls in Quebec City at the 2019 QMJHL Draft.

For 14 of those players, they were fortunate enough to pull on the Charlottetown Islanders jersey.

“We were really happy [with our draft],” said Islanders head coach and general manager Jim Hulton. “When you go in to a draft without a first round pick, you’re never sure how it’s going to unfold. Overall we got bigger, which was a mandate of ours, and we got a number of guys who were on our wishlist for a number of reasons. When the scouts are happy, we’re happy.”

Charlottetown’s day started in the second round with back-to-back picks at 31st and 32nd overall. They used those picks to select goaltender Jacob Goobie from the Halifax Macs and forward Justin Gill of the Sainte-Eustache Vikings.

In Goobie, Hulton believes they may have found their successor to Matthew Welsh. The 5’10 goaltender follows a long line of Macs netminders in the Islanders system that includes Welsh, Dakota Lund-Cornish, and Mason McDonald.

“Goobie is a guy that we valued highly coming in, and kept our fingers crossed that he was there,” said Hulton.

When asked about what aspect of Goobie’s game appealed to him, Hulton answer was simple: Everything.

“He’s a winner; he took his team to the Telus Cup. He’s a highly competitive player, has a lot of the same attributes that Matthew Welsh has and we all know how well he turned out.”

Goobie was not in attendance today as he is currently with Team Canada’s Program of Excellence Under-17 Goaltending Camp.

Justin Gill, meanwhile, is described as a power forward who scored 12 goals and 32 points in 40 games with the Vikings. Hulton drew a comparison to a former fan favourite in Charlottetown.

“He’s going to endear himself well to the fans in Charlottetown; he has a game reminiscent of Pascal Aquin,” Hulton explained. “He’s a big-bodied north-south guy that protects the puck well and has a great release. We’re really excited to get him in to the fold.”

With their third pick of the day, the Islanders selected smooth skating defenseman Luke Vardy from the Dartmouth Steele Subaru Major Midgets with the 49th overall pick. The 5’11 Vardy racked up 30 points in 35 games with Dartmouth, earning himself Rookie Defenseman of the Year honours in the Nova Scotia Major Midget League.

On the clock again at 52, the Islanders made a deal with the Cape Breton Screaming Eagles, sending the 52nd pick to the Eagles in exchange for the 59th and 75th picks of the draft. Charlottetown used the 59th pick to take a gamble on Ryan Greene, a Newfoundland forward who played with the South Kent Selects Hockey Academy.

Highly regarded as one of the top talents in the draft, Greene fell to the Islanders in the fourth round due to his NCAA commitment with Boston University.

“It’s a big gamble to take Ryan, but we had him as one of the top ten players in the entire draft.” said Hulton. “It’s a long shot, he definitely won’t be with us next year, but the door is open ajar a little bit in the future.”

“If it materializes, it will be one hell of a pick.”

The Islanders used that 75th overall pick to select big-bodied defender Ben Boyd from the Cole Harbour Wolfpack of the NSMMHL. Boyd recorded 15 points in 32 games this season and describes himself as a physical defender.

“I like to get in the corners and use my size in every possible way.” said the 6’2 Boyd.

After a bit of a break, the Islanders stepped back to the podium in the 8th round to select Charles-Edward Tardif, a 5’8 forward who spent this season with the Ontario Hockey Academy, the same program that produced former Islander Matthew Grouchy and current Islanders associate coach Guy Girouard.

With their next two picks, the Islanders dipped in to the prospect pool closer to home. They selected centre Alex Graham and defender Matt McQuaid, who played this past season with the Charlottetown Pride and Kensington Wild respectively.

Both players have previous connections to the Islanders; Graham was the billet brother of current Isle Lukas Cormier last season, while McQuaid is the cousin of former Islander Alex McQuaid.

“When you talk about players who have that Charlottetown DNA, in terms of the style we want to play, Alex jumps out.” said Hulton on Graham.

The Islanders would make a third pick in the 9th round, selecting forward Michael Horth with the 159th pick. Horth spent the majority of this past season with the CCL Dynamiques of the QMEAA before earning a call-up to the Collège Charles-Lemoyne Riverains of the QMAAA.

After that, the Isles would make each of their picks in the final five rounds of the draft on forwards, selecting (in order from 10th to 14th round) Samuel Chabot, Daniel Kline, Massimo Gentile, Sam Archibald, and Charlottetown native Max Chisholm.

In wrapping up, Hulton had some advice to pass along to the newest members of the organization.

“This is just the first step; the next step is all in how you handle it,” said Hulton. “Whether you were happy with your selection in the area you wanted to go, or whether you were disappointed, now is the time to move on to the next phase. You have to win the summer with your conditioning and you have to be ready mentally and physically for training camp.

From everyone at the Charlottetown Islanders organization, congratulations and welcome to our franchise! 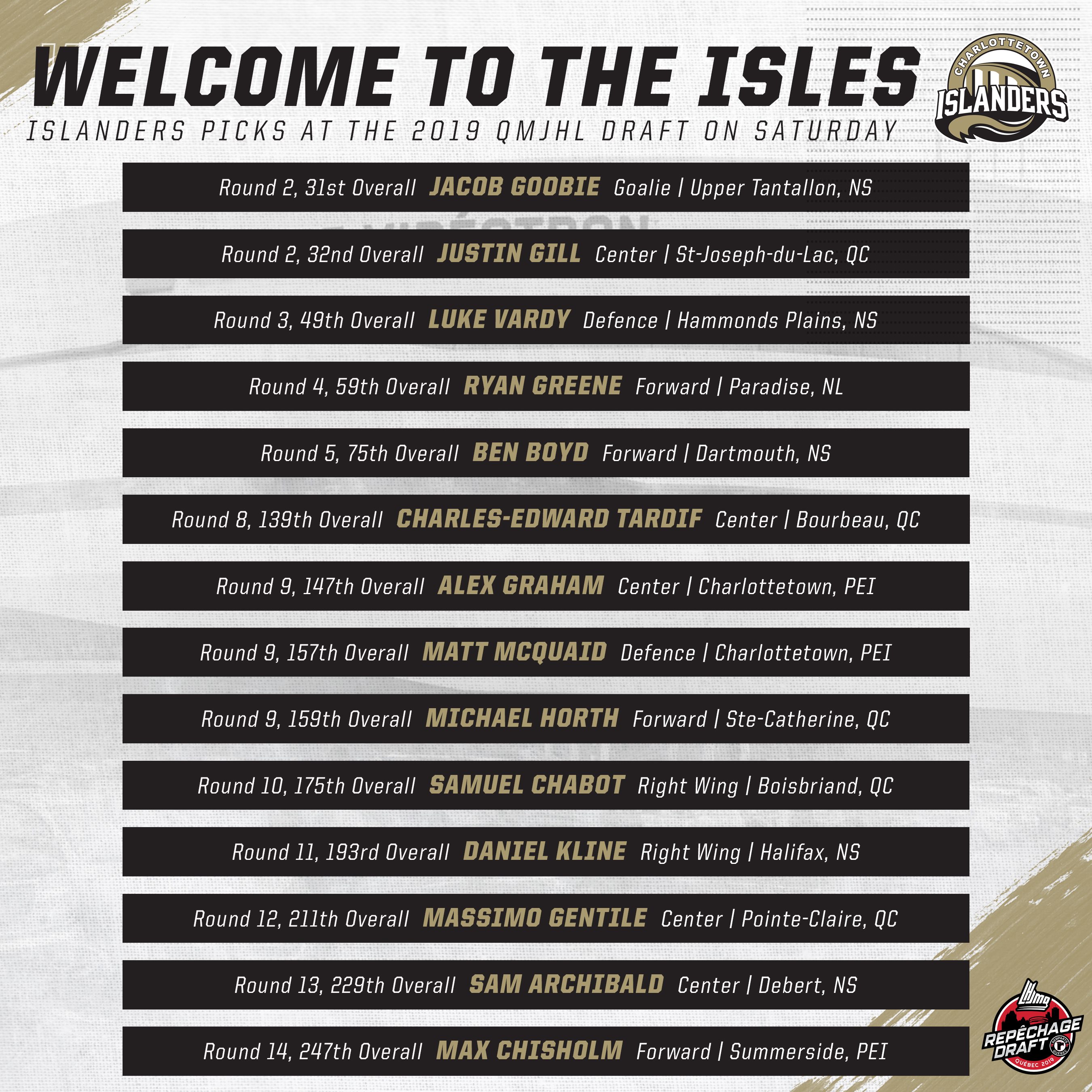