Goobie stands tall as Isles keep on winning against Wildcats 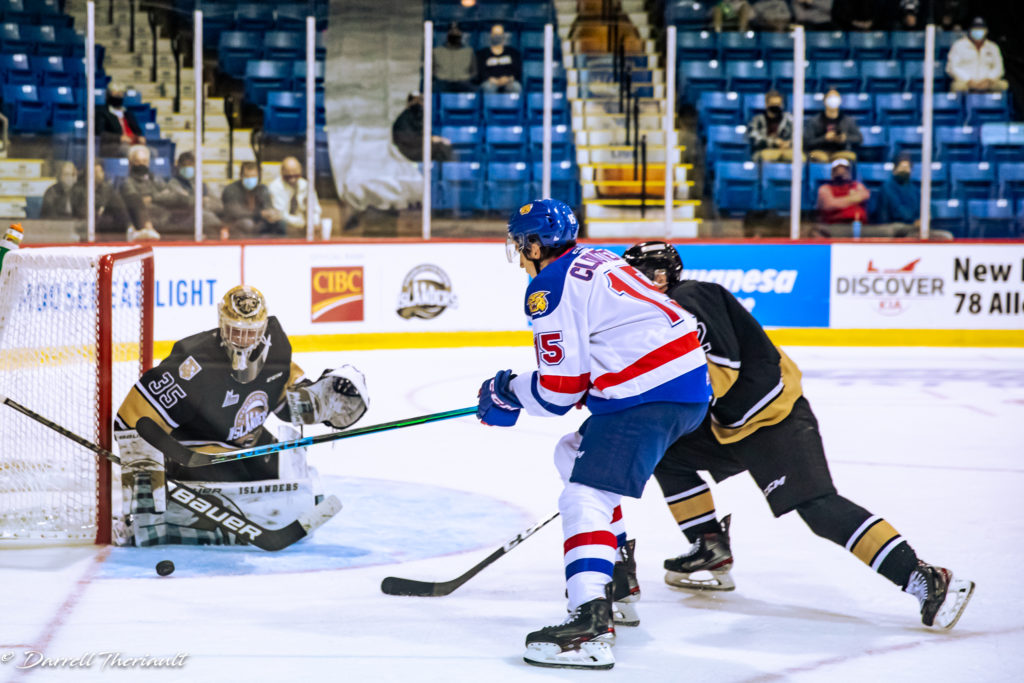 Jacob Goobie took an L in Cape Breton, but tonight he bounced back.

The young netminder from Upper Tantallon, Nova Scotia wasn’t tested often, but pulled together a solid performance in his first start at the Eastlink Centre this season. Goobie recorded 21 saves as the Charlottetown Islanders defeated the Moncton Wildcats 4-1 to move to an impressive 6-1 to start the season.

“This was a big step forward for Goob,” said Islanders head coach Jim Hulton on his young goaltender. “It’s not the way you want to start with that first shot, but he really settled down and made some difficult saves as the game went on.”

“He looked calm and poised, and that was the most impressive thing through my eyes.”

Lukas Cormier had been quiet on the scoresheet the last few games, but he came alive in the first period. The Vegas Golden Knights prospect jumped up in to the rush on a powerplay and received a well-placed pass from Thomas Casey right in front. Cormier would make no mistake from in tight, converting for his third goal of the season and a 1-0 Isles lead.

The Wildcats would tie it up shortly thereafter. Ottawa Senators prospect Philippe Daoust would come down the wing and threw a quick wrister past Goobie to even the game up.

That shot was the first shot of the game against Goobie; however, the young netminder didn’t let that rattle him and said he was able to settle back down thanks to his team in front of him.

“After that first shot, I knew we weren’t out of it,” explained Goobie. “We had a little bit of energy going and we weren’t defeated on the bench. I knew the guys had me so I was ready to go on the next shot.”

“He didn’t get rattled, he got himself settled down.” added Hulton.

Charlottetown would take the lead back before the end of the period thanks once again to the powerplay. 16-year-old rookie Sam Oliver would get a great pass from Noah Laaouan right in front of the net. He’d spin and go top shelf on Wildcats starter Dakota Lund-Cornish. For Oliver, that’s his third goal as he gets off to a strong start to his QMJHL career.

The pace would bounce back and forth through the second period before the Islanders pulled ahead in the third for good. Cedric Desruisseaux would sprint down the left wing and unload a low wrist shot on Lund-Cornish. The puck would trickle between the over-age netminders pads and across the goal line, giving Desruisseaux his ninth goal on the early campaign.

Casey would put the game on ice with an empty netter to secure yet another multi-point game on the early season, pulling him ahead of Desruisseaux for the league lead in points.

Laaouan finished the game with two assists while Cormier added a goal and an assist of his own. Patrick Leblanc also picked up a lone helper in the victory.

The next time the Islanders take the ice will be another home game Friday night against the Halifax Mooseheads. You’ll be able to hear that game live on Fair Isle Ford Isles Radio on YouTube. Wanna watch the action? Head to Boston Pizza or The Factory Downtown!