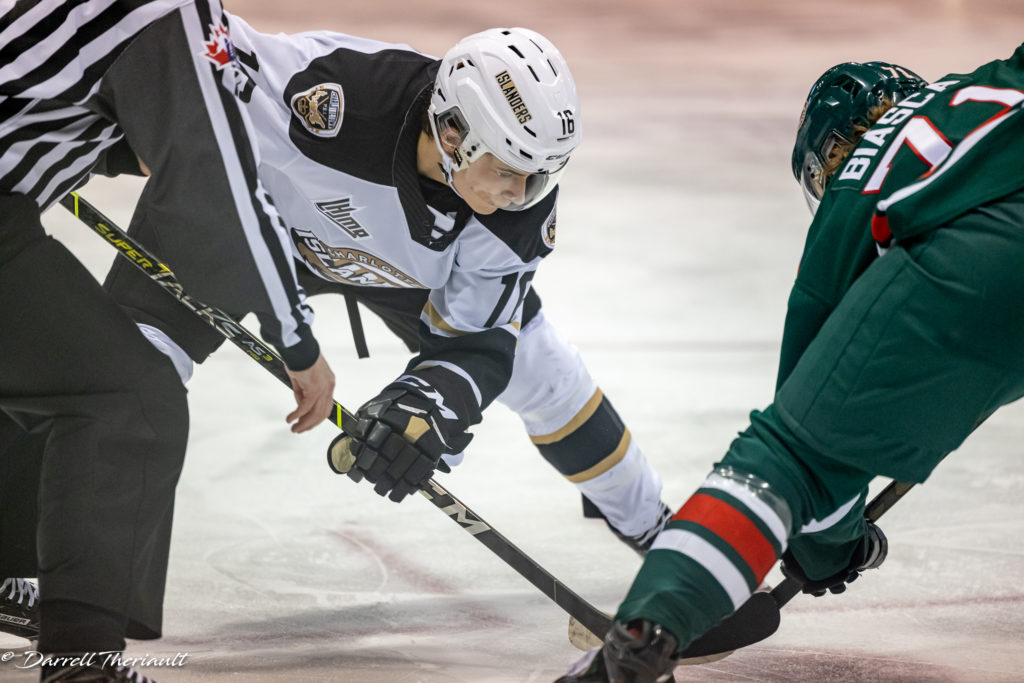 After the last two games scheduled against the Cape Breton Eagles were postponed, the Charlottetown Islanders will finally have their opportunity to go for 14 straight victories when they head to Halifax to take on the Mooseheads tonight.

The Islanders (28-4-0-0) wrapped up a dramatic 13th straight victory on Saturday night with an overtime victory over the Mooseheads at home. Noah Laaouan’s game winner with, ironically, 13 seconds left to spare in the final frame sealed the victory and cemented his team’s place atop the QMJHL standings a little more firmly. With this season’s overall standings being determined by win percentage, Charlottetown’s .875 percent moves them a few points further ahead of 2nd-place Val d’Or (.853).

As mentioned prior to Sunday, Cédric Desruisseaux extended his point streak to 17 games on Saturday with an assist on Brett Budgell’s first period goal. On top of his incredible point streak, The Warwick, QC product is also sporting a plus/minus rating of plus-37; that mark currently is a franchise record.

Meanwhile in Halifax, the Mooseheads (13-15-5-3) are coming on strong at the right time of year despite the loss. The Moose have picked up points in four straight games; their .472 win percentage is just .002 behind the Rouyn-Noranda Huskies for twelfth in the QMJHL. The Moncton Wildcats are nipping on Halifax’s heels for fourth in the Maritimes Division, a positioning that means more than ever with the recent announcement of the 2021 President’s Cup Playoff format.

Halifax continues to get the most out of their young guns. Bobby Orr, Markus Vidicek, and Jordan Dumais currently sit 1st, 2nd, and 3rd respectively among all QMJHL rookies in points. The trio, along with forwards Landon Miron and James Swan, also dominate the rookie goal-scoring list, taking up five of the top six spots in the goals category.

You can catch all of tonight’s action on Fair Isle Ford Isles Radio on YouTube with Mooseheads play-by-play commentator Gareth MacDonald! You can also watch along on Eastlink Community TV or at any one of our five viewing partners across Charlottetown.