Isles looking for more than Easter Eggs tonight against Mooseheads

The Charlottetown Islanders have the chance to accomplish something tonight that no other QMJHL team has done this season.

With an Easter Sunday victory tonight against the Halifax Mooseheads, the Islanders will become the first team in the league to crack the 30-win plateau.

The Islanders (29-4-0-0) remain the toast of the league, sitting atop the standings with a .879 win percentage. They continue to rack up the wins against their Nova Scotian rivals, defeating the Mooseheads 6-2 on Thursday night for their 14th straight victory, extending their franchise record winning streak. That mark is tied for the 18th-longest win streak in QMJHL history. A win tonight would move them into a five-way tie for 13th.

To properly illustrate how incredible Desruisseaux’s season has been, if his current point-per-game pace was prorated over a regular 68-game season, the 21-year-old would have 132 points, shattering the previous single-season high in franchise history of 110 points set by Ben Duffy in 2012-2013. His linemate, Thomas Casey, wouldn’t be far behind with a prorated total of 130 points in 67 games.

Meanwhile, the Mooseheads (14-16-5-3) picked up a big 7-2 victory over the Cape Breton Eagles Friday night, inching them slightly closer to the Rouyn-Noranda Huskies for 12th in the QMJHL standings. They received a massive contribution from 17-year-old Zachary L’Heureux. The hard-nosed forward, who is projected by some to be selected in the first round of the 2021 NHL Draft, picked up four points to bring him to 37 points in just 31 games this season.

For season ticket holders in attendance, reminder that today’s game is Home Game #17. For those who can’t attend today’s game, you can listen live on a special presentation of Ocean 100’s Saturday Night Hockey with George Matthews and Cory Arsenault, or watch live on Eastlink Channel 10/610!

Schedule update for the Maritimes Division
5 hours ago 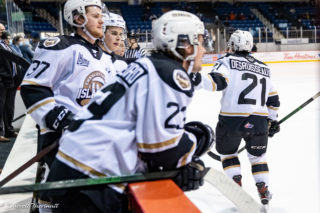