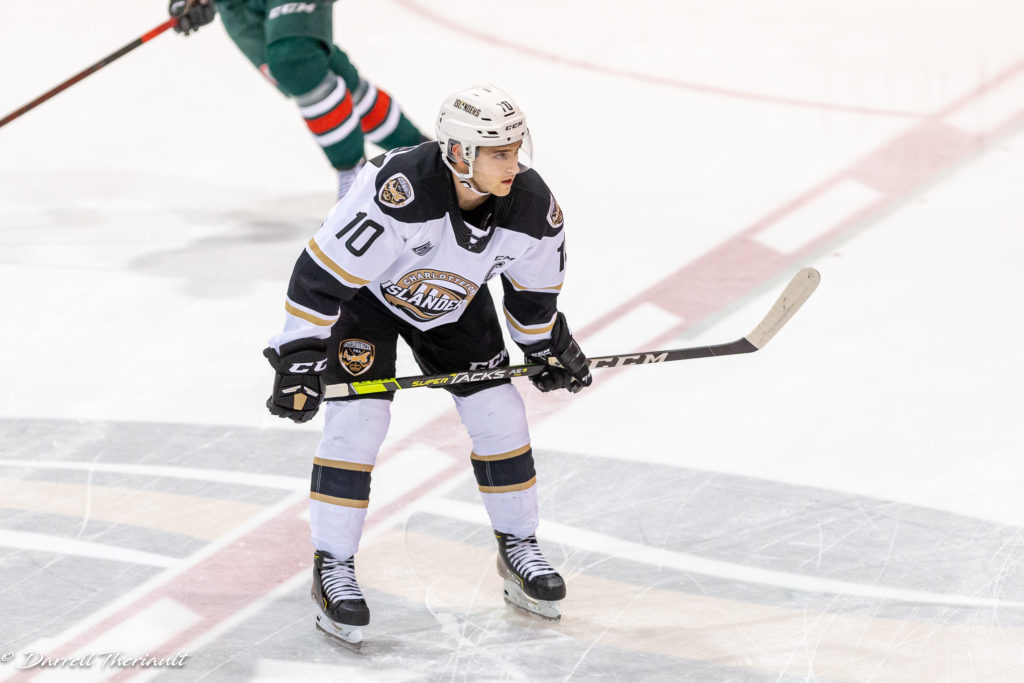 It’s been a short offseason, but the Charlottetown Islanders are back on the ice for the 2021-2022 season as Training Camp officially gets underway on Saturday, August 21st. The first portion of camp will be highlighted by rookies and prospects vying for the opportunity to crack an Islanders roster that is expected to contend for the President Cup once again. That will be followed by veterans arriving at camp the following week on August 29th.

Like last season, this training camp will be unlike many before. Only a handful of players selected in the 2019 and 2020 Drafts attended training camp last year; for many hopefuls, this will be their first time hitting the ice in the Black and Harvest Gold. It’s an experience that will be new for both players and staff alike.

“We’re excited to see these players; it’s a great opportunity for the kids that may have missed out due to the pandemic,” said Islanders head coach Jim Hulton. “We really have two draft classes that we haven’t seen yet, that’s why we wanted to have an actual rookie camp. We want to see those guys, get them as comfortable as possible, and put them in competitive settings. We have three games right in that first week so we’re going to see them all in both a practice setting and pre-season game setting.”

“I think we’ll get to get a very good reading of each player in a short period of time. It’s very short, it’s very intensified, but that pretty much mimics the conditions of the regular season.”

While it might appear at first that an atypical training camp of this nature would present challenges, it’s an opportunity that Hulton and his staff are looking forward to, one that sees a return to normalcy that is welcomed with open arms.

“Last year was such an anomaly in all regards, so we’re looking forward to having somewhat of a normal training camp with intra-squad and exhibition games. We’ve really put an emphasis on players that are willing to come in and compete for a spot on the team and willing to play exhibition games. The vast majority were receptive to that, which is really exciting for all of us.”

One of the big names to watch in camp will be forward Matis Ouellet. The 5’11 forward from Rouyn-Noranda, Quebec was Charlottetown’s highest selection in the 2021 Draft, with the Isles selecting him 32nd overall. There was excitement to nab Ouellet where they did; he was ranked 11th by QMJHL’s Central Scouting department. Hulton and his coaching staff will now get their first look at him in-person.

“Mathis is a modern player that is adept in all three zones. That fit our DNA as a guy that competes hard on both sides of the puck,” said Hulton about Ouellet’s game. “He is an excellent skater; I think that is what set him apart. He had elite skating marks across the board from all of our scouts, that gives you a leg up right away.”

Like many years, the Islanders appear to have identified another player out of Ontario that may come in and pay dividends. Cole Crowder is one of a number of camp invites, but the lone invite from Ontario. The hulking forward comes by way of Sudbury, Ontario and has a strong family background in hockey.

“Cole has excellent pedigree. His father Troy played in the NHL; I played against him in junior while [Islanders associate coach] Guy Girouard was a teammate of his.” Explained Hulton. “The thing that jumps out at you with Cole is his size. He’s extremely big, skates really well, is raw in terms of experience at higher levels, hence why I believe he is available as a free agent.”

“Whenever you see someone that big, and the reports are that he skates well, plus given the bloodlines, that’s well worth a look.”

With training camp now just days away and players chomping at the bit to get on the ice, Hulton had advice to pass along for players looking to put their best foot forward in camp.

“Get into your comfort zone as quick as possible. Bring the best version of yourself and don’t be someone that you’re not. Highlight the skills that got you to this point; if you’re a skater and scorer, be a skater and a scorer. If you’re a big, physical player, be big and physical. Don’t worry about what anybody else thinks you should be, just come in and be the best version of yourself.”

The first chance for you to catch the Islanders in pre-season action will be on Tuesday, August 24th when they take on the Saint John Sea Dogs at the APM Centre at 7:30pm. Stay tuned as more details will be made available regarding public access to on-ice events in the coming days.