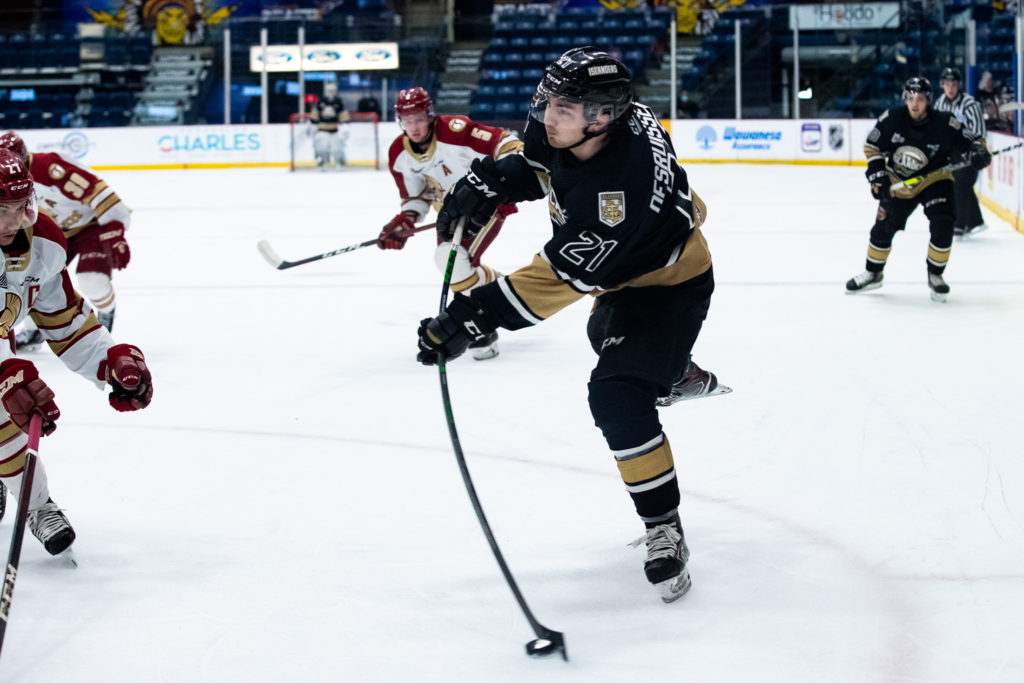 The Gold Rush began on the right foot.

Colten Ellis proved dominant once again between the pipes for the Charlottetown Islanders; The St. Louis Blues prospect made 18 saves while Brett Budgell picked up the game winner and an assist as the duo led the Isles to a 3-0 victory over the Titan, giving Charlottetown a 1-0 series lead.

“It’s a great feeling to get the first victory out of the way. With that said we have to move on and not take that feeling into tomorrow.” said Budgell on the victory.

“As a coach you’re always worried about long breaks between games. I really liked how we locked the game down in the third.” added Isles head coach Jim Hulton on his team’s victory.

As two teams that only played each other once this season, the Isles and Titan spent the first part of the first period feeling each other out, both sides refusing to give anything up. Eventually, the Isles would find a crack in the Titan armour; Patrick Guay would take a shot from the slot and Brett Budgell would find the rebound, sliding the puck just past Bednar’s outstretched pad to make it 1-0 midway through the first period.

Charlottetown and Bathurst would continue to trade chances back and forth throughout the second period. Alas, the two opposing goalies would stand tall between the pipes. Colten Ellis and Jan Bednar gave their teams every opportunity to take the first game of this series.

Fortunately for Charlottetown, they solved the mystery between the pipes. Early in the third period Thomas Casey would find a waiting Cédric Desruisseaux all alone in front of the Titan net. He’d make no mistake for his first goal of the playoffs, ultimately putting the game out of reach. Zac Beauregard would add a late marker of his own to wrap up the 3-0 victory.

Patrick Guay had arguably his best game in an Islanders uniform, picking up an assist in the victory. Drew Elliott, Thomas Casey, and Sean Stewart all picked up single helpers in the victory.

With the Isles now holding a 1-0 lead in the series, the team is ensuring that they don’t look too far ahead of things as the series wages on.

“They’re all important in a short series. We have to make sure we have a better game plan to avoid the rust and residue. They’re gonna come out hard to avoid going down 2-0 so we have to be prepared for that.” Hulton said on the preparation for tomorrow’s game.

The two teams will do battle in Game 2 of the series tomorrow afternoon from Shawinigan once again. You’ll be able to catch the game live at the PEI Brewing Company once again at tomorrow’s Playoff Watch Party for Charity. Tickets for the event, with all proceeds going to charity, can be purchased HERE.