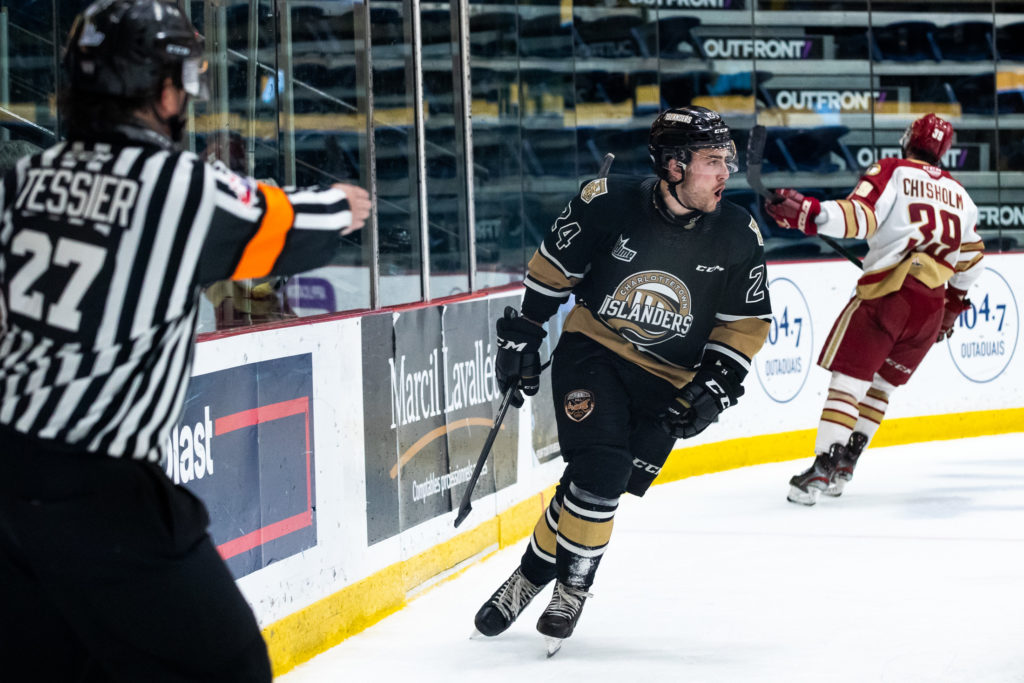 It’s safe to say that the Charlottetown Islanders and Acadie-Bathurst Titan took their fans on a wild ride Sunday afternoon.

It was an unconventional game as the goals piled up quickly. Momentum swung back and forth before Charlottetown locked it down. Sam Oliver would score the eventual game winner in the third period as the Islanders pushed the Titan to the brink in the series with a 7-5 victory.

“We have to be a hell of a lot better; we’re fortunate that we have the ability to outscore our mistakes, and we had to score a lot tonight,” said Islanders head coach Jim Hulton on the defeat, not pleased with his team’s performance. “The positive is that our guys didn’t get down; we coughed up a three-goal lead but our confidence to keep pushing was what helped us win.”

“This one was pretty hard; it was a game we weren’t expecting to play but that’s the playoffs. At the end of the day a win is a win, but we have to gather ourselves and be better for the next one.” said Cédric Desruisseaux, who scored twice in the victory.

The game couldn’t have started better for Charlottetown, doing exactly what they said would do and start on time. The Isles would garner the majority of offensive opportunities and eventually breaking the ice. Noah Laaouan would receive a pass from Lukas Cormier and hold the line well. He’d get a shot off from just inside the blueline that gets past a screened Jan Bednar to open the scoring.

The goal seemed to really swing the momentum in Charlottetown’s favour as the offense soon followed. On a powerplay Zac Beauregard would find Oscar Plandowski with a great pass in the slot and he goes upstairs on Bednar for his first goal of the playoffs.

The perfect period finished with Cédric Desruisseaux adding to his incredible season. At the end of a timely penalty kill, Sam Oliver would get a great chance on Bednar. He’d follow his own rebound and find Desruisseaux with a pass all alone out front and he’d put it into the wide open net.

As quickly as Charlottetown built up that lead, it quickly dissipated in the second period. Bathurst would storm back with the offense that propelled them to fourth overall in the QMJHL. Three goals over a span of six minutes would bring the game back to even and set-up a wild second half of the game.

The two teams would trade goals within seconds of each other before Desruisseaux would restore the Islanders lead just minutes before the end of the frame. The veteran forward would prevent the puck from leaving the offensive zone and play give-and-go with Keiran Gallant before going upstairs on Bednar, swinging momentum once again.

The teams would battle late before Oliver put Charlottetown up for good; Ben Boyd would drive hard to the net and get the puck past Bednar. The dribbling puck wouldn’t make it across the goal line but Sam Oliver would tuck the puck away for what became the game winner.

Drew Elliott would score not long after to provide a little more cushion for the Islanders down the stretch. They’d hold off a late Titan goal to push Bathurst to the edge of elimination.

You can watch along on Eastlink Community TV Channel 10/610, or tune in with George Matthews and Cory Arsenault on Ocean 100! Don’t forget that you can also watch all the action live at the PEI Brewing Company for our third Playoff Watch Party! Tickets are just $5 with 100% of proceeds going to a local Island charity. You can purchase your seat in advance HERE.