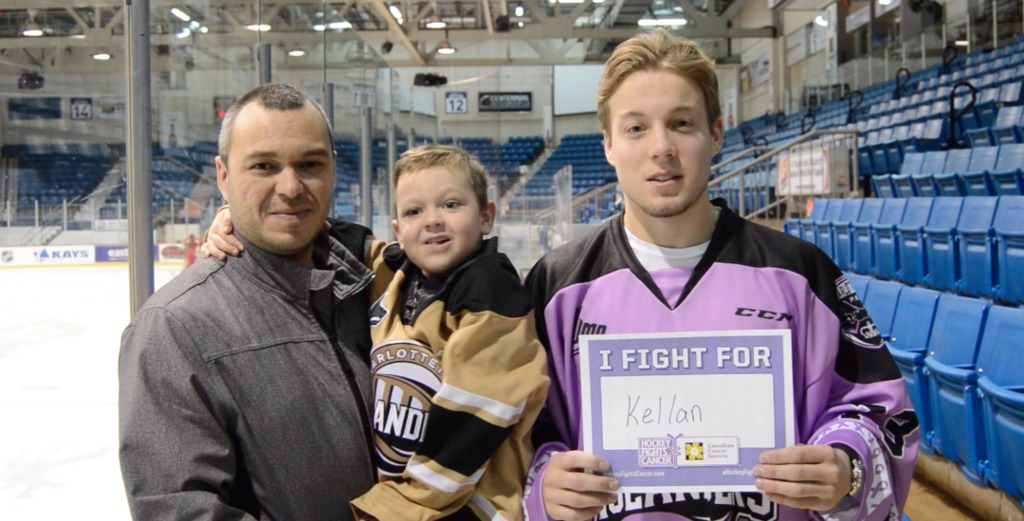 On Friday, November 29th, the Charlottetown Islanders officially join the Hockey Fights Cancer initiative taken on by the National Hockey League and it’s affiliates. It’s a movement designed to not just end cancer once and for all, but also encourage those who are currently battling and celebrate those who have defeated the disease.

“Our son, Kellan, was three and a half when he was first diagnosed,” said Vicki McAdam. “He was diagnosed with acute lymphoblastic leukemia, otherwise known as ALL.”

ALL is defined as a type of blood cancer in which the bone marrow makes too many lymphocytes (a type of white blood cell). McAdam says it requires three years of treatment, meaning that the now 5-year old Kellan will be finished his treatment in August of 2021. His treatment is currently split between the Queen Elizabeth Hospital in Charlottetown and the IWK in Halifax

“At his current rate, Kellan will receive chemotherapy everyday orally. He’ll get chemo in his implanted port every month, and chemo in his spine every three months.” explained Vicki.

5-year old Kellan McAdam will be dropping the ceremonial puck on Friday night alongside someone who has grown to become a close friend – Matthew Welsh. Kellan’s connection with the Isles’ veteran netminder dates back to a meeting at a Children’s Wish Foundation Christmas part in December of 2018.

“Matt and a couple of his teammates were in attendance and they had a little mini-stick station going on,” Vicki said. “Kellan has such a love of hockey, so he gravitated towards the station and immediately had this connection with Matt. Kellan is a pretty energetic little guy and Matt completely matched that energy.”

Vicki said the connection between her son and Welsh was evident from the moment they met.

“Kellan is not typically a kid who shows affection easily; you kind of have to work for it. He was instantly hugging Matt, he couldn’t stop playing with him, he even invited Matt to sit with us at our table and eat.”

After that night, Welsh had a new number 1 fan. 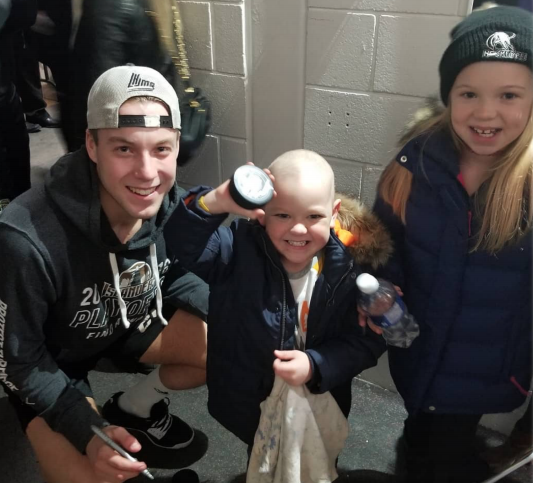 “He was obsessed,” said Vicki on Kellan’s new friend. “He was like ‘we have to go see Matt, we have to go see my hockey buddy Matt’. We took him to some games and every time he would wait outside the dressing room for Matt.”

Welsh and Kellan have grown to become quite the friends. They’ve built a great bond, with Welsh even sending him videos of well wishes during visits to the IWK. Vicki said that Kellan has even taken up the desire to be a goalie; unfortunately, due to the implanted port, it’s the one thing in hockey that he’s unable to do.

“Kellan just always seems to light up every time we mention Matt,” Vicki added. “Any time we tell him we have an opportunity to see them he gets so excited. He seeks out every opportunity to be around Matt because he looks up to him so much. It’s amazing the connection that my 5-year-old has with this 20-year-old.”

Kellan himself has started hockey. While just 5 years old, the benefits he’s received from playing during this process have been near indescribable.

“When he was first diagnosed, Kellan couldn’t walk for about six weeks. He had strong bone pain and lost a lot of muscle mass because of that. Once he started walking again, he had a lot of strength to re-build,” explained Vicki. “When he got back in to playing hockey and skating, it really helped him strengthen his legs, and you’d never guess that he had ever lost any strength because his legs were so strong from skating. Mentally, it just boosted him. It’s euphoric the amount of joy that this sport brings him. He loves getting on the ice, and loves being in the net.”

“Physically and emotionally, hockey has brought him so much benefit and enjoyment.”

Friday night’s opening ceremony gives the McAdams a chance to see Kellan on the ice in his element, being acknowledged for his fight against ALL.

Join us on Friday, November 29th, as Hockey Fights Cancer. We take on the Val d’Or Foreurs at 7:30pm at the Eastlink Centre. We will have a number of initiatives in place to help raise funds for the Canadian Cancer Society, including limited edition lavender jersey raffles and auctions, T-shirt promotions in the Isles Team Shop, and a Hockey Fights Cancer photobooth in the Eastlink Centre lobby. Anyone who is currently battling cancer or has won their fight are welcome to join us free of charge. Tickets are on sale at the Eastlink Centre box office, by phone at 902-629-6625, or online at https://boxoffice.eastlinkcentrepei.com