A historic season comes to an end, Shawinigan lifts the cup 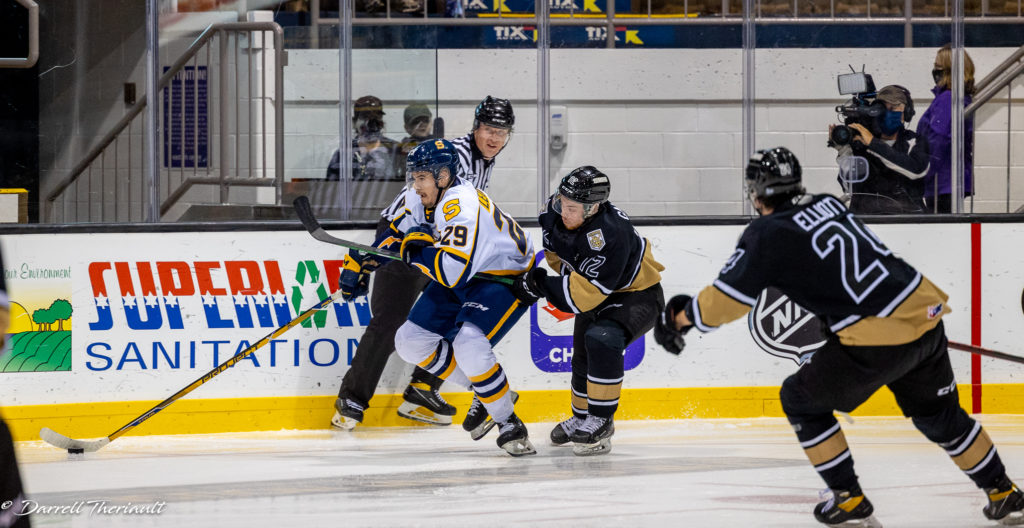 After a dominating performance up in Shawinigan, only one thing sat in the minds of all the Islanders throughout the dressing room, three more. It’s onto the next game for Jim Hulton, it wouldn’t matter if the Isles beat the Cataractes 30-0, he’d say it’s time to leave that game behind, and focus up again. The Islanders still believe they haven’t hit their A+ game yet which is what you need to do to win a championship. A very exciting thought and the way their performance has trended since game one, the thought of it getting even better is exciting. When the puck dropped at 5 pm, it took a couple of minutes but the Isles eventually got their feet under them and were back to a puck-control dominant style of play.

As I said, it took a few minutes for the Isles to get their feet under them in this game as Shawinigan had the upper hand for about the first four minutes. Just 1:15 into the game, the Cataractes top-line struck early to silence the crowd. Mavrik Bourque came in hard and found a loose puck behind Lapenna and buried it to make it 1-0 Cataractes quickly. The Islanders didn’t let that early goal derail them though as they picked up the pace and returned to the more dominant style Isles we saw in games two through four. They finally tied things up at 10:43 when Brabenec found a loose bouncing puck in the crease on the PP and whacked it home to tie the game up. Brabenec’s 4th of the playoffs blew the roof off the Eastlink Centre and was assisted by Patrick Guay and Lukas Cormier. The Isles finished the period strong and took a commanding lead in shots but we still went into the first break deadlocked at 1’s.

Shots were 17-9 for the Islanders after one.

The Islanders carried their strong finish to the first period into the opening minutes of the second frame and a red-hot William Trudeau got the Isles rolling again in the middle frame. Trudeau sent a rocket from the point and got it through all the traffic and to Coulombe. Coulombe got a piece of it but not enough as it rolled over him and dropped in and across the line to make it 2-1 for the Isles. The apples on the play were credited to Jeremie Biakabutuka and Michael Horth. That goal came at 4:27 into the period and then before Matt MacLeod could even announce it, the Islanders had a 3-1 lead just 5:21 into the middle frame. Jakub Brabenec took a nice cross-ice dish from Cormier and directed it onto the net. Coulombe got a piece of it but then Jakub smacked a backhand shot between his blocker arm on the rebound for his second of the game. Lukas Cormier and Zachary Roy were the helping hands on the tally. Then, the Isles penalty kill went to work on killing off a Budgell double minor for high-sticking. The Islanders did a tremendous job at killing it off but unfortunately for them, they got a little unlucky with just 13 seconds remaining on the penalty. A rebound fell right beside Lapenna and Olivier Nadeau was able to spin and fire it home to make it a 3-2 game before the second break. Pierrick Dube and Xavier Bourgault were credited with the apples.

Shots were 28-15 for Charlottetown after forty.

The final frame was a very back-and-forth period with the upper edge being on Shawinigan’s side. With being within just a single goal, they came out hard in the third knowing they needed just one to even things out. They did just that at 10:38 into the frame, got one. After missing a clearing attempt by a foot, Veillette regained control for the Cataractes and fed it to Dube on the right wing. Dube fired a wrister over the glove of Lapenna and tied up the game. William Veillette was the lone helper on the play. Noah Laaouan and Franky Lapenna saved the Isles butts late in the frame killing a few dangerous Shawinigan opportunities to force the game into OT.

It took just 41 seconds into OT for us to have a winner declared. Pierrick Dube launched a wrister past the blocker of Lapenna from the left side of the ice to win it 4-3 for Shawinigan. The win gave Shawinigan a 4-1 series victory and declared them the 2022 President Cup Champions.

Final shots on goal were 36-25 for the Islanders.

A historic season Charlottetown. Thank you for the love and support along the way, we will be back!