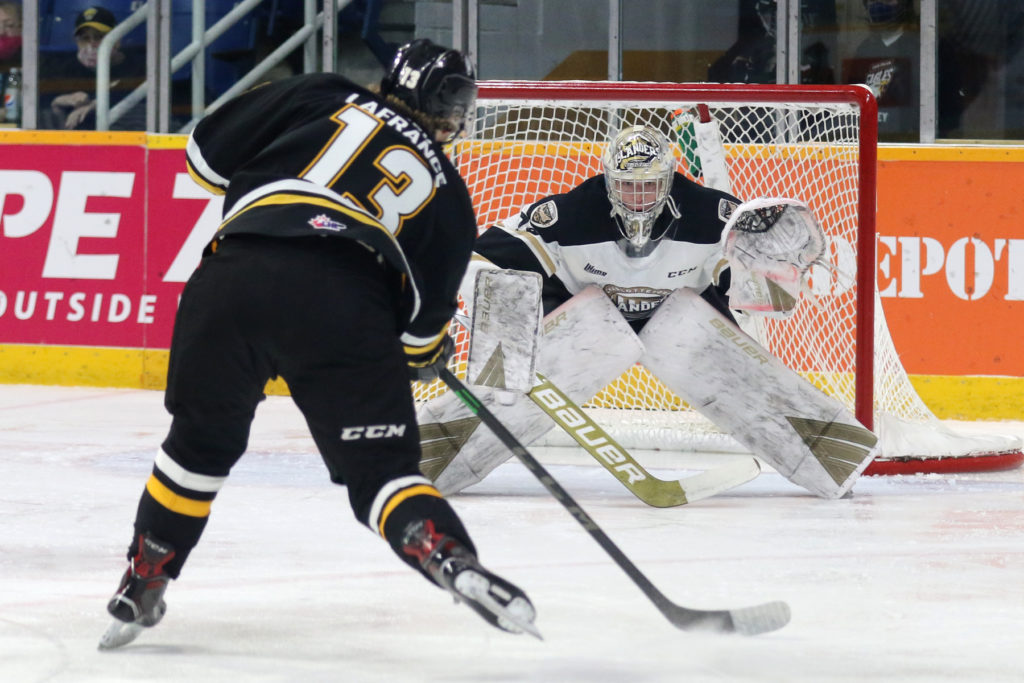 Make it three in a row for your Charlottetown Islanders.

“We are really happy with our team performance tonight,” said Islanders head coach Jim Hulton on the victory. “Our structure and play away from the puck was excellent and we had contributions from all parts of the lineup.”

Brendan McCarthy kicked off the action in the first period. The Goulds, Newfoundland native corralled a Lukas Cormier dump in behind the net and made a deft move to evade a defender. McCarthy walked it out in front and put a nifty wrist shot over the shoulder of Grimard for the first goal of his QMJHL career.

Charlottetown would continue to apply relentless pressure throughout the first period and in to the second, absolutely peppering Grimard with shots. Eagles head coach Jake Grimes called a timeout to settle his troops and it worked; On a 2-on-1 break, Liam Kidney would finish off a cross-crease pass down low, tucking it past a sprawling Colten Ellis for his second goal of the season.

While the play in the second period swung back and forth, the third period belonged to the Islanders. Boyd would break the tie early in the third, getting a pass from Thomas Casey in the high slot and burying it on Grimard for his first career QMJHL goal.

The lead would be extended not long after by Johnston. The Saint John, New Brunswick native would get a stretch pass from Gill that sent him in uncontested on Grimard. Johnston would make no mistake for his first goal on the early season.

Gill would nab his first goal on the season shortly thereafter, outmuscling an Eagles defender at the offensive blueline and wiring a wrist shot from the high slot over the shoulder of Grimard, extending the lead to 4-1 early in the third period.

Cape Breton would try and push back with a goal of their own in the third from Felix Lafrance, but it was too late. Cedric Desruisseaux would seal the victory late, adding his fourth goal of the early season to send the Isles off with their third victory of the season.

Lukas Cormier picked up two assists in the victory, extending his torrid pace to the season with eight points in three games. Desruisseaux, Gill, and Thomas Casey each put up multi-point games of their own while Budgell and Anthony Hamel picked up single assists.

Most impressive, however, may have been the team’s defensive play in the game. Charlottetown limited Cape Breton to just 15 shots in the game, while firing 42 of their own.

“Limiting a team to 15 shots is an impressive team accomplishment,” added Hulton. “We look to build on our success heading into tomorrow night’s game.”

The two teams will do it all over again tomorrow night as they do battle at the Centre 200 at 7:00pm. You can listen to all the hockey action across the airwaves on Ocean 100’s Saturday Night Hockey with George Matthews and Cory Arsenault!