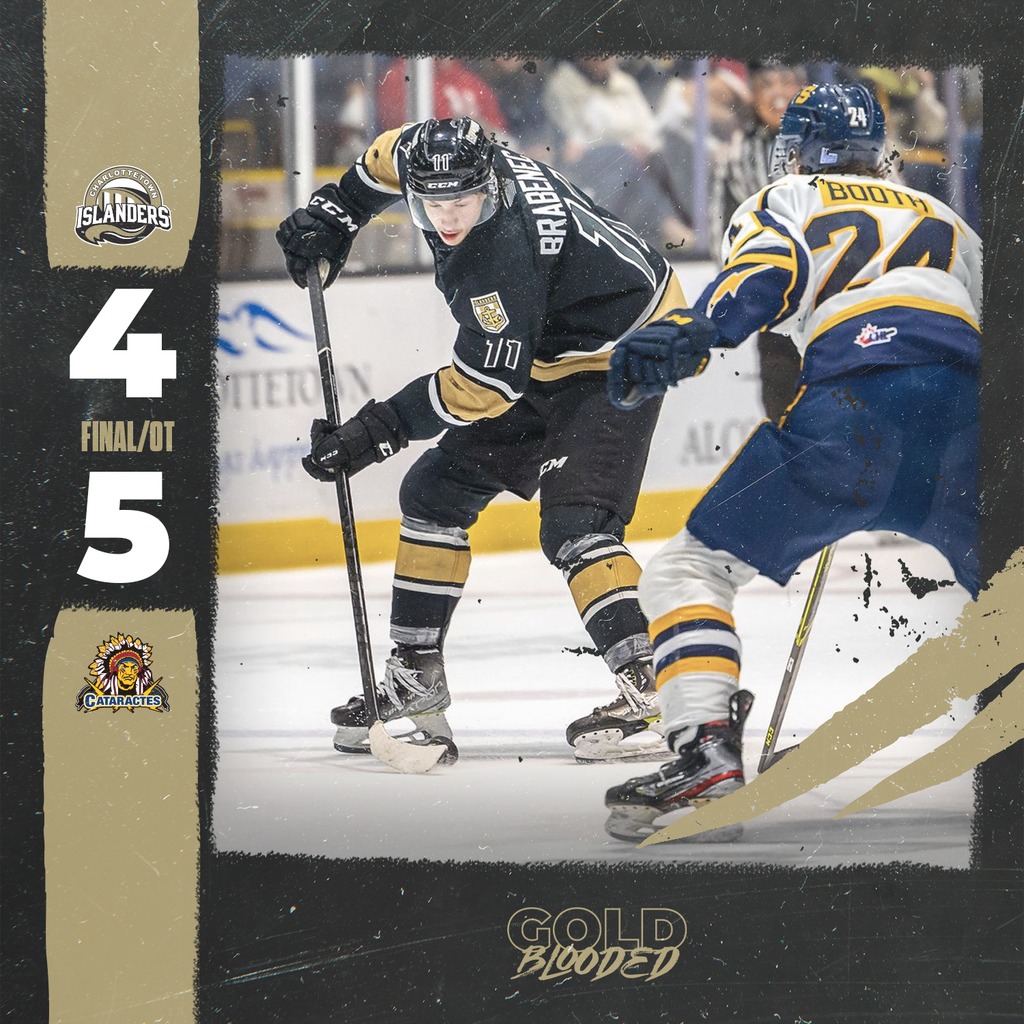 Going down 3-0 in the finals is not an option for the Islanders. At least, not a very positive outcome in terms of coming back in this series. Games one and two are now in the rearview mirror for Jim Hulton and his squad, all that matters is tonight’s performance. Thankfully for the Isles, they have proven to be one of the best major junior clubs in Canada on the road this season, especially in Quebec. This season in Quebec, the Islanders had a record of 10-1-1, and in the playoffs, they’ve gone 2-0. Hulton said that gives his boys a real confidence boost before puck drop today and that they know the challenge that lies ahead of them. Charlottetown had a good performance in game two and Hulton saw lots to build off of. With the pressure building up a bit, we’d see if they persevere or cracked under the stress of the finals. When the puck dropped at 8 pm, the Islanders showed right off the hop they were ready to perform in Shawinigan.

The Islanders did exactly what Hulton said they needed to do in the first period, come out hard in the first ten minutes to set the pace of this game. The Isles intensity early paid off as well as they potted the first goal of the game for the first time this series. At 4:01 into the first period, Jakub Brabenec was able to get his twig on a Cormier shot from the point and redirect it past Coulombe on the man advantage for his second of the playoffs. Lukas Cormier and Patrick Guay were the helping hands on the game-opening tally. The lead was short-lived however as the Cataractes scored to tie it up just 48 seconds later. Shawinigan took advantage of a defensive mismatch on the rush and Xavier Bourgault was left all alone and buried his 11th of the post-season sniping it past the glove of Lapenna. Olivier Nadeau and Mavrik Bourque were credited with the apples. The Isles didn’t let off the gas pedal though after letting the Cataractes tie it up and Cormier managed to reclaim the lead at 13:57 into the first frame. Lukas Cormier whipped a makeshift one-timer low past the blocker of the Cataractes tendy to make it 2-1 on his 7th of the playoffs. The helpers were Brett Budgell and Xavier Simoneau. We headed to the first break up 2-1.

Shots were dominated by the Isles at 17-2 after one.

The first half of the middle frame was a little rough for the Islanders and Franky Lapenna. The Isles started the second period on the PK and things were going fairly well on it until a crowded crease blocked Lapenna from making a save. Xavier Bourgault launched a wrister top shelf over Lapenna who could only flail at it as he had a Cataractes player pushed onto him by his defense. The goal tied the game at two and was assisted by Pierrick Dube and Olivier Nadeau. Then at 6:17 into the period, Shawinigan took a 3-2 lead. Isaac Menard took a pass from behind the net right in the slot and blasted a one-timer past the glove of Lapenna. The helping hands were Pierrick Dube and Xavier Bourgault. The tally also made the Cataractes three for four on shot attempts to that point, a rough start for Franky however the goals were not entirely on him.

In the second half of the middle frame, the Islanders took back over and got back on the scoresheet. At 15:01 into the period, Patrick Guay worked his way into the crease and was able to get a piece of the puck and sneak it through Coulombe off a Cormier snapshot from the point. Guay’s 11th of the playoffs tied the game up and was assisted by Lukas Cormier and Jakub Brabenec. Then, to cap off the period scoring, Patty Guay tied it up just under three minutes later. Laaouan shot the puck wide of the Cataractes net and it took a lucky hop off the end glass and right out front to Guay who gave it a quick whack with the backhand and tucked it inside the left post to put us up 4-3. Helpers on Guay’s 12th of the post-season were Noah Laaouan and Dawson Stairs. The Islanders held onto their 4-3 lead through forty minutes.

Shots were still heavily in the Islanders favor at 30-11 after forty.

The final frame was filled with back and forth action and Isles fans on the edge of their seats. Unfortunately, for the Isles and their fans, the Cataractes were able to strike first in the final frame and tie the game up. Mavrik Bourque snuck into the slot all alone at 7:11 and took a pass from behind the net and snapped it five-hole on Franky Lapenna who never had the chance to get set. Bourque’s 8th of the season was assisted by Olivier Nadeau and Charles Beaudoin. This was the only tally of the period after the Isles penalty kill worked their tails off near the end of the frame to keep things tied and force OT. The Islanders would hope for a better result than game two’s overtime when the Cataractes scored 2:50 in to win it.

Shots were 36-20 for Charlottetown after sixty minutes.

The extra frame took even less time to solve than game two’s OT. Just 46 seconds in, Charles Beaudoin threw a puck on net while falling down near the right side of the net, and in an attempt to clear the puck from out front, Noah Laaouan swept it right into his own net. The puck made its way into the back of the net and just as we thought this series couldn’t have any bigger heartbreaking moments, the Islanders lose game three in OT off an own goal. Beaudoin was credited with his first of the post-season and Isaac Menard picked up the apple.

“I think the key tomorrow starts tonight, as soon as we leave the building this one is done, it’s over. Get your focus back, it’s the same thing after the last game but we don’t have the luxury of a few days off here. We can’t dwell on it, we just have to stay in the moment, get our focus, and correct a few things little things.” Jim Hulton said on what the message in the locker room is after game three. “The Bourque line is very opportunistic, this team is very opportunistic. I liked a lot of things we did today, our PK improvements were drastic and evident. Feels like we’re coming along now we just have to break through.

Final shots were 36-21 for Shawinigan.

“For now, we just have to look back on our game three. Look at what killed us, and look at what we did good. The only message right now is that it’s not over until it’s over. It’s a best-of-seven so the team that gets to raise the cup needs to win four and they’re only at three so it’s not done.” Patrick Guay said when asked what the message is in the dressing room following game three.

“We did a good job on the PK today and we have to bring that again tomorrow. We have to correct some stuff 5-on-5 but I think overall the game was still pretty good. Just some small corrections. We need to shut down their top players, they won the game again tonight by themselves.” Lukas Cormier said when asked what needs to be done to finally get over the hump and win a game in this series.

Once again, heartbreaking is the only word that comes to mind after the Isles fall for the second straight game in OT. This time, off their own D-man’s stick. You’d have to think that after all this series has entailed, the Islanders would be due for a couple of bounces in one of these games. Still, though, the Isles have improved every game and as Jim Hulton said in the post-game presser, it’s not over yet. The Islanders have all the information they can take now after dropping the first three games in this series and need to use it to finally get over the hump and claim a win tomorrow night. Even if it’s just a game, they need to start with one. Take it game by game and who knows where this series could potentially go. There is always hope Isles faithful, don’t lose yours quite yet.

“I think it’s the best game we’ve played in the series. Coming into a building like this with an incredible atmosphere and only give up 21 shots, it’s one of the best road games we’ve played all year. It’s disheartening to not walk away with a win but encouraging the fact that we keep getting better each game. The body of work feels significantly better over the past couple of nights even though it doesn’t show it on the scoreboard.” Jim Hulton said when asked about his thoughts on the game and another tough loss.