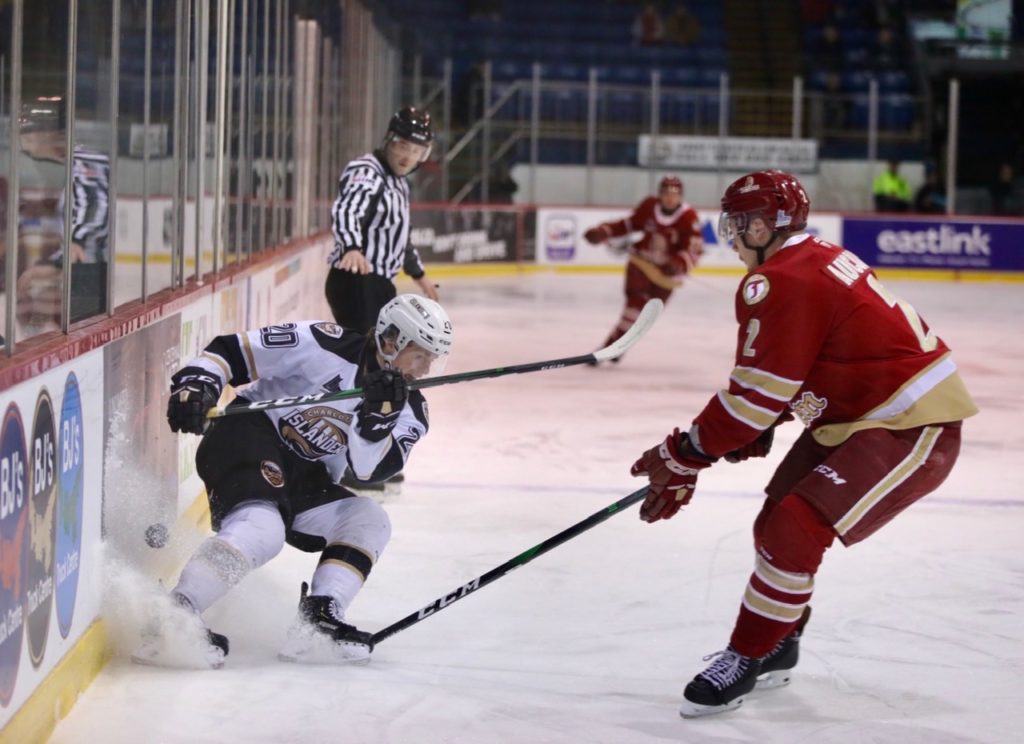 On a snowy, blustery night in Charlottetown, two veteran goaltenders battled it out inside the Eastlink Centre.

Unfortunately for the hometown fans, Tristan Berube would come out on top.

The 20-year-old would record 41 saves, while Mark Rumsey would record two assists, as the Acadie-Bathurst Titan defeated the Charlottetown Islanders 2-1.

The game didn’t exactly start the way the Islanders had it drawn out. A bobbling puck and a blown tire led to a breakaway from Bathurst’s Remy Anglehart. The veteran forward scored quickly on Matthew Welsh, giving Anglehart 20 goals in a season for the first time in his career, and giving the Titan a 1-0 lead just 20 seconds in to the game.

Bathurst’s luck would continue later in the period. On a 2-on-1 break, Welsh would stop the initial Mark Rumsey shot. The puck would find it’s way on to Olivier Coulombe’s stick. Welsh would get across in time, but Coulombe’s shot would deflect off an Islanders stick and dribble past a helpless Welsh. For Coulombe, that would be his third goal on the season.

It took until the end of the second for the Isles to get on the board, and it would be the returning Nikita Alexandrov. Fresh off a standout performance for Team Russia at the World Junior Championship, Alexandrov would pick up a beautiful stretch pass from Oscar Plandowski in full stride, drive hard to the net, and get a shot off on Berube. A Titan defender draped himself over Alexandrov and both of them fell hard in to Berube, pushing the puck in to the net.

After a quick review, the officials determined that Berube was not directly interfered with, giving Alexandrov his 15th of the season and pulling the Islanders within one late in the second period.

The Isles would push hard in the third period to knot the game up, but it was to no avail. Berube put up the wall in net and Bathurst heads home with their seventh win of the season.

Matthew Welsh made 16 seasons in defeat, while Brendon Clavelle also had an assist for Charlottetown.

The Islanders are back in action at home on Saturday night against the nationally-ranked Chicoutimi Sagueneens. Join us pre-game as we honour Nikita Alexandrov and Gaetan Jobin for their performances at the World Junior Championship. Tickets are available at the Eastlink Centre box office, by phone at 902-629-6625, or online by clicking HERE. It’s Cyber Saturday too; use promo code NIKITA online to get and adult/senior ticket for just $14, or a student/youth ticket for just $7!