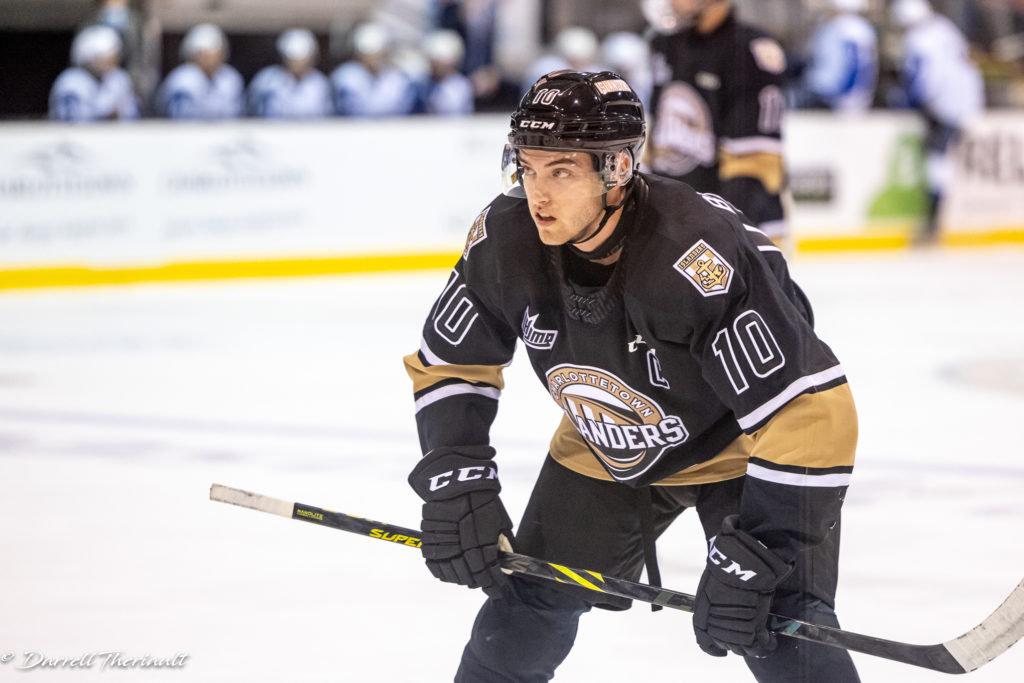 The Charlottetown Islanders wall of captains sits just outside the Charlottetown Hockey Memorabilia Room at the Eastlink Centre. It features players who have made their NHL debuts in P.O Joseph and Guillaume Brisebois, workhorses like Quinn O’Brien and Ryan MacKinnon, fan favorites in Oliver Cooper and Brendon Clavelle, and inaugural captain Jack Nevins. All fantastic in their time here and have had a special impact on Islanders hockey.

Now, after dawning the “C” for these past two seasons, Brett Budgell awaits his name being embedded on that same wall.

When asked about the significance of just getting to play in the QMJHL, let alone being the captain of a franchise, Budgell commented “playing in the QMJHL has been a special experience and it has been quite an honour to be named captain of the Charlottetown Islanders for the past two seasons. Having the responsibility of the captaincy has definitely led to both my personal and professional growth. The role of captain has helped me develop my game because of my responsibilities both on and off the ice. As captain, I like to lead by example with hard work and a high level of compete.”

Budgell, a native of St.John’s, Newfoundland, has spent the entirety of his QMJHL career in the black and harvest gold uniform after being taken 25th overall by the Islanders in the 2017 QMJHL draft. Brett is the only captain in team history to have spent five seasons with the Islanders. The 2001 born is currently in his last year after being brought back as an impactful twenty-year-old presence. He is also off to the hottest start of his career, thus far on the season, he has posted nine goals to go along with nine assists for a total of eighteen points in seventeen games. Brett’s career-high in points came last year when he put up 58 points in forty games during the condensed season. In total, Budgell has suited up for the Isles 220 times to this point while tallying 180 points.

“I have many favorite things about being an Islander. I think the most important has been the friendships that I have made with my teammates and coaching staff over the last five years,” said Budgell.

This season, he was given an incredible opportunity to attend the Toronto Maple Leafs rookie camp.

“Toronto was a fantastic experience for my first NHL training camp. I am very fortunate to have been able to attend and learn so much in my time there. The main lesson I learned was how to be a pro day in and day out. That is what I look to draw on most throughout this season.”

The Islanders are off to a hot start sitting at 12-5-1-0 and currently are 1st overall in the Eastern Conference.

“This year’s team is certainly a special one. We are as close as any team I’ve been on and have a great dynamic in the room. Everyone is a huge part of the team and knows what they need to do for us all to be successful.”

The Isles return home for the first time since October 30th after taking on a lengthy five-game road trip that featured their first Quebec stint of the season. The team was able to stay hot earning four wins and claiming eight out of a possible ten points.

You can see Brett Budgell and the Islanders back in action at home this Thursday night against the Moncton Wildcats. Thursday night is Student Night at the Eastlink Centre and all student tickets are on sale for $4 as well as $4 drinks for everyone (19+). Tickets are available at the Eastlink Centre Box Office in person (Monday to Friday 11 am to 5 pm) as well as before game time, online, or by phone at 902.629.6625.