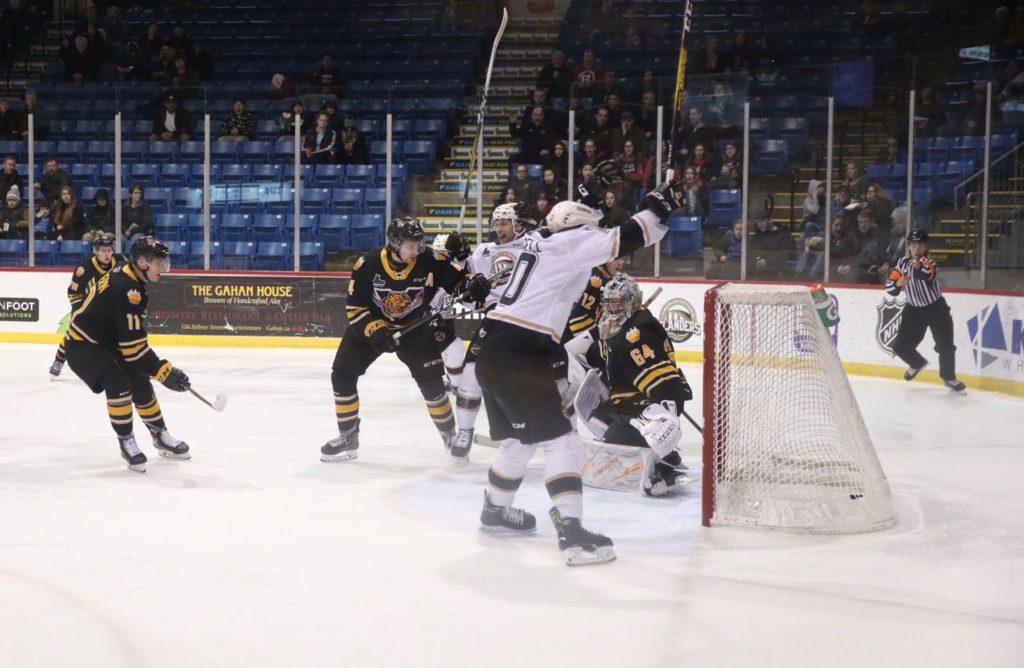 It may have been icy outside, but Brett Budgell and Thomas Casey heated things up inside the Eastlink Centre Friday night.

The duo each had four points, with Budgell recording his first career QMJHL hat trick while Casey added a goal and three assists, as the Charlottetown Islanders offense exploded in a 6-1 defeat of the Victoriaville Tigres.

“It was something special,” said Budgell on his first three-goal performance in the Q. “I was asked during the intermission when my last one was and it was definitely a while ago.”

Head coach Jim Hulton said he was happy to see one of his leaders have such a big night.

“Budgy is a glue guy for us; he’s the guy that holds everything together as a jack-of-all-trades. He’s an elite penalty killer, he plays that bumper role on the powerplay, and he’s a very consistent player. It was great to see him get rewarded on a night like tonight.”

Hulton added that he hoped this performance would fuel his confidence going forward.

“I think there’s more offense to his game than we’ve seen. He is our leading scorer, but on nights like this you see him push forward to another level.”

The Islanders already had a 2-0 lead when Budgell got on the board. Already with an assist on Brendon Clavelle’s first period goal, Budgell and his linemates were in the midst of an aggressive shorthanded attack. Nikita Alexandrov found Budgell with a pass up the middle and he’d enter the zone and fire a shot that got under the arm of Tigres starter Fabio Iacobo.

Budgell’s 19th goal on the year would chase Iacobo from the crease as he gave way to rookie Nathan Darveau. Unfortunately for Victoriaville, the onslaught wouldn’t let up.

Casey would extend the lead shortly thereafter. A hard forecheck would allow Zac Beauregard to intercept a puck, and he’d find the 19-year-old Charlottetown native with a cross-ice pass. He’d beat Darveau short-side to give himself 20 goals on the season.

Budgell would get back in on the fun later in the period on a 4-minute powerplay. The puck had barely touched the ice when Lukas Cormier fired a low wrist shot from the point. Cedric Desruisseaux would outmuscle a Tigres defenseman in front to get the rebound, poking it behind Darveau for Budgell to come in and scoop up the rebound just eight seconds in to the powerplay.

The hat trick would be completed just two minutes later at the tail-end of the same powerplay. The Islanders would move the puck around the zone seamlessly before Alexandrov tapped a puck out front to a waiting Budgell, and he’d make no mistake for his 21st goal on the year.

That would be the Islanders’ third powerplay goal on the night, a clear indicator that the offense was starting to come to life once again. It was an area of their game that Hulton said they worked on lots this week.

“We reinforced getting back to our set-up and worked on a variety of different options. Guy [Girouard] worked extensively with them this week on a couple of different set plays and they created options tonight.”

Desruisseaux would add the additional tally in the game for Charlottetown, capping off a two-point night. He, Budgell, Casey, Clavelle, and Alexandrov would all finish with multi-point nights. Cormier, Beauregard, and William Trudeau would add the other single assists.

“It was really nice to see some goals go in the net. This has been a little bit of us turning the corner as of late.” said Hulton on his team’s overall performance.

The Islanders don’t have much time to rest as they’re back on the ice with one of their tallest tasks of the second half in the top-ranked Sherbrooke Phoenix. Limited tickets are still available online by clicking HERE. Use promo code ROSCO48 in honour of former Islander and current New York Islander Ross Johnston to receive 48% off your ticket!