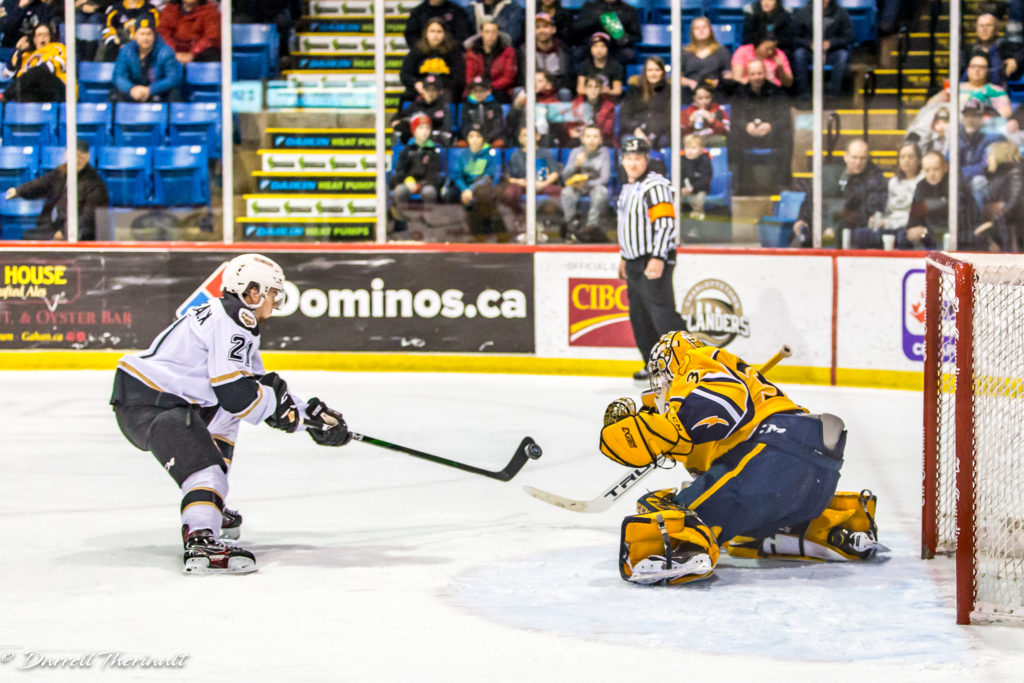 The 2020-21 Quebec Major Junior Hockey League season has certainly seen its share of ups and downs for a number of reasons, but obviously none greater than those brought upon by the Covid-19 pandemic. Nevertheless, there are always bright spots and some are more eye-popping than others.

Twenty-year-old Charlottetown Islanders forward Cédric Desruisseaux, a native of Victoriaville, has been an integral part of his team’s success in the early part of the season: 12 wins and only two losses, paving the way to what could be a seventh consecutive winning season for the franchise.

After 14 games, Desruisseaux has nearly a two point-per-game average and his 27 points are second-most in the league, just one point shy of Cape Breton’s Shawn Element. But what’s even more impressive for the the 5’8” forward is that he has found the back of the net 19 times in those 14 games. In other words, he has scored 28% of his team’s goals (68) and, at his current pace, he could end up registering 81 markers over 60 games played. Only Guy Lafleur and Luc Simard, both at the beginning of the ’70s, managed to record 28% of their teams’ goals during a season.

As the league stopped play at the very end of the month of November, Desruisseaux had scored at least one goal in his last 13 games. The last player to produce as many goals in a similar span was none other than Sidney Crosby who, fifteen years ago, registered 14 consecutive games with at least one goal (from December 5, 2004, to February 4, 2005).

Desruisseaux’s hot start has him averaging 1.36 goals per game. That has him rubbing elbows with some of the league’s hottest starts to the season, with great players such as QMJHL Hall of Famers: Guy Lafleur, Mario Lemieux, Stéphan Lebeau, Guy Chouinard, Mike Bossy, Jacques Cossette, Normand Aubin and Normand Dupont. His goal-per-game average of 1.36 to start a season holds the pole position since 2000-01.

Desruisseaux, a first-round pick of the Tigres in 2016, has only been held off the scoresheet once this year. And it occurred during the very first game of the season, back on October 2 versus Moncton. Since then, he has ignited the red goal light each game, which includes one hat trick and four two-goal games.

By projecting his goal totals over a 68-game regular season, Desruisseaux could potentially reach 92 markers. The last player to get to 90 goals was Stéphan Lebeau (94) with the 1987-88 Shawinigan Cataractes. The last player to reach 80 goals was Yanic Perreault (87) with the 1990-91 Trois-Rivières Draveurs. And the last player to register 70 goals was Thomas Beauregard (71) with the 2006-07 Acadie-Bathurst Titan. Beauregard (1.23) places second to Desruisseaux from the year 2000 through 2020 in terms of goals-per-game to start a season. The QMJHL’s all-time goal scoring record belongs to none other than Mario Lemieux, who scored 133 times with the 1983-84 Laval Voisins.

Obviously, a scorching hot start does not make a season, only time will tell what the final output will be. In the meantime, here are a few comparisons that demonstrate Cédric Desruisseaux’s historical impact:

In conclusion, the 2020-21 season has been incredible for Desruisseaux up to this point. Only he has the answers for where he’ll end up once all is said and done. “For now, I’m going to take it game by game and keep putting in the hard work. I’ll try to keep things going after the Holidays”, mentioned Desruisseaux, who has been excelling on a line with Patrick Leblanc and Justin Gill this season.

A text by Denis Demers, Head Statistician at the QMJHL

QMJHL postpones games in the Maritimes Division
5 days ago