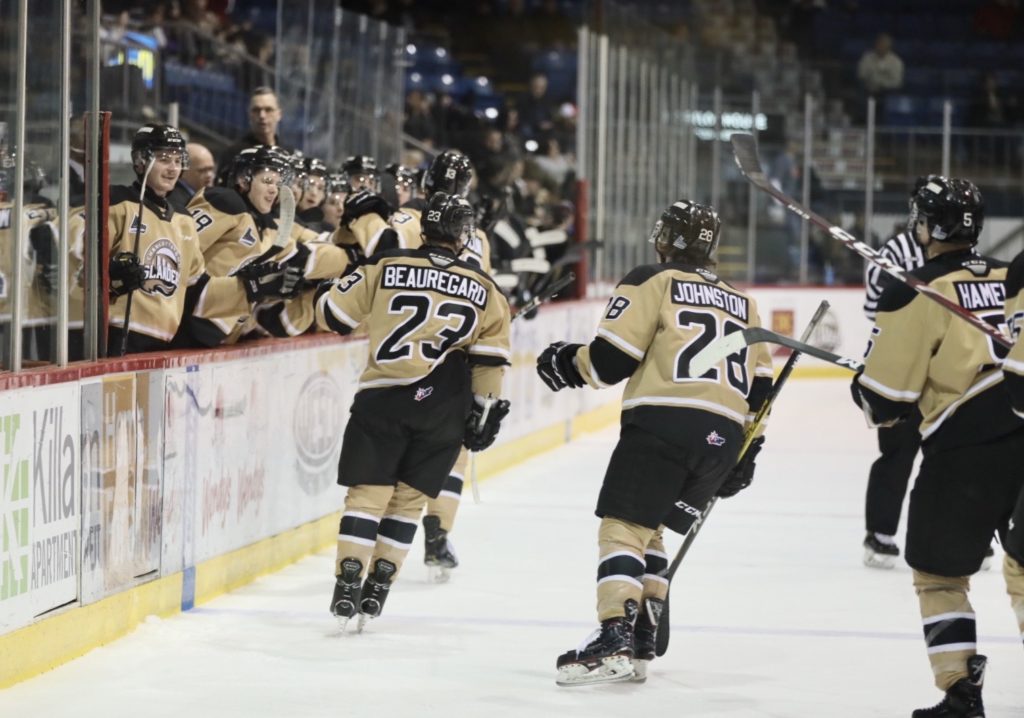 The first weekend of the season was a positive one for Max-Antoine Melançon.

The forward, acquired from the Shawinigan Cataractes earlier last week, recorded his first goal as an Islander and it proved to be the game winner, as Charlottetown defeated the Halifax Mooseheads 5-2 on Sunday afternoon.

“He doesn’t look like a guy that hasn’t played in the league since last year,” said Isles head coach Jim Hulton on Melançon’s performance this weekend. “He’s a big body, he’s patient with the puck, and he’s exactly what the doctor ordered for us. It’s great to see him get rewarded.”

“It was a nice feeling scoring my first goal here,” added Melançon on the goal. “It’s a nice organization so far, and was really happy to score early and get it off my shoulders.”

The Mooseheads would draw first blood on the powerplay in the first period thanks to Benoit-Olivier Groulx. A blocked shot would snap Brendon Clavelle’s stick and cause the puck to end up on Groulx’s stick at the side of the net. He’d bury it on a wide-open cage for his 12th goal of the season.

Gaetan Jobin would answer on the powerplay for Charlottetown not long after, causing the Eastlink Centre faithful to make it rain teddy bears from the stands on the annual Teddy Bear Toss game. The Swiss winger, who the team highly anticipates will be joining Team Switzerland for the 2020 World Junior Hockey Championships, would receive a pass from Xavier Bernard and streak down the wing before sniping the puck above the shoulder of Mooseheads starter Cole McLaren, giving Jobin his seventh goal of the season.

Liam Peyton would give the Isles the lead in the second period thanks to a beautiful end-to-end rush. The big forward would use his size to his advantage and drive to the net, outwaiting a flailing McLaren before sliding the puck in to the net. For Peyton, that goal would be his third of the season.

Melançon would join the fun shortly thereafter. The 6’3 forward would find a puck low in the zone, play pitch and catch with Zac Beauregard, before wiring a wrister above the shoulder of McLaren for his first as an Islander.

For Melançon, this goal was part of making the most of a second chance in the Q after a disagreement with his former coach in Shawinigan

“We weren’t on the same page, so I decided to go [to Princeville] and wait for a new opportunity,” explained Melançon on being sent down. “It’s nice to get this chance; the coaches are great, the players are great, and I’m just happy to be here and do my best.”

Maxim Trepanier would score a controversial goal late in the second as both teams fell on top of Matthew Welsh, but that’s as close as they’d come. Thomas Casey would keep his hot streak alive, scoring twice in the third including the empty netter, and the Isles would make this weekend a perfect one.

The two goals capped off what was a five-goal weekend for Casey, which as Hulton said, was needed.

“[This is] a breakthrough we’ve been waiting for,” said Hulton on Casey’s big weekend. “With Nikita out we’ve really struggled offensively, and we’ve kept waiting for somebody to break out.”

Matthew Welsh would make 19 saves for the victory, the 108th of his career. The netminder would also tally an assist on Casey’s second goal. Jobin would finish the game with a goal and an assist. Xavier Bernard, William Trudeau, Noah Laaouan, Zac Beauregard, Drew Johnston, and Brett Budgell would all add single assists.

The Islanders hit the road for their third Quebec road trip of the season before returning home for their next home game, Wednesday December 11th, against the Mooseheads once again. Ticket are on sale now at the Eastlink Centre box office, by phone at 902-629-6625, or online at https://boxoffice.eastlinkcentrepei.com