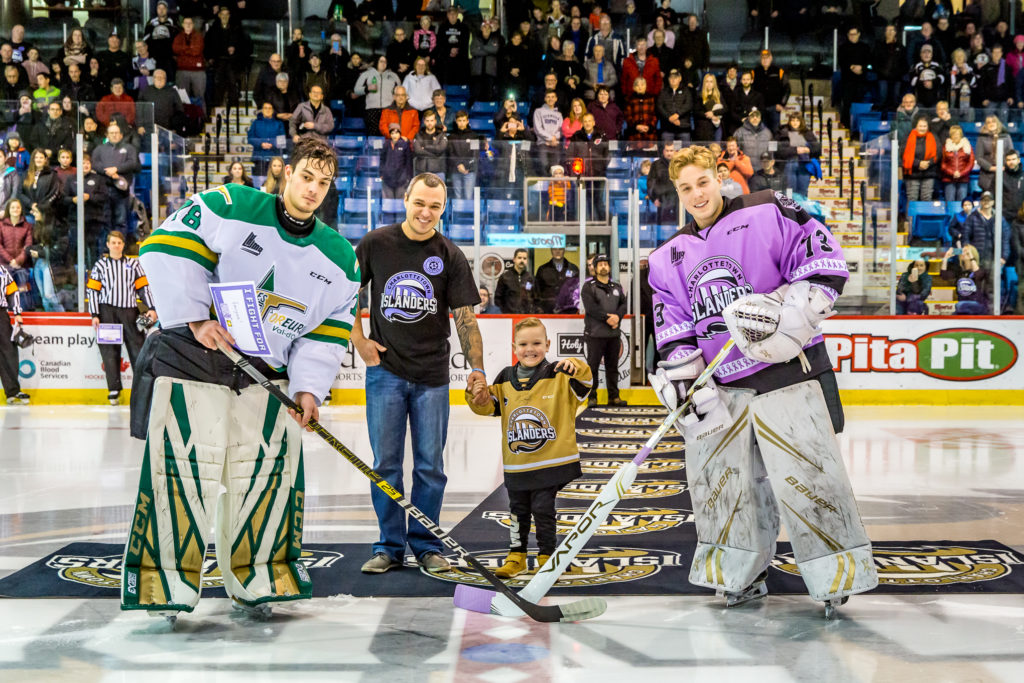 The Charlottetown Islanders got this one for Kellan McAdam.

Thomas Casey scored a hat trick and Matthew Welsh made 26 saves as the Islanders defeated the Val d’Or Foreurs 4-3 in overtime on Hockey Fights Cancer night.

“What a great kid; to have him come out and see that great big grin on his face was amazing.” said Isles head coach Jim Hulton. “We talk about battling and real life adversity, and that’s it in a nutshell. Sometimes we get wrapped up in game and we need nights like this to bring it back to reality.”

Casey’s offensive explosion tonight was the latest as the speedy forward rebounds from an injury-riddled campaign. The Charlottetown native now has five points in his past three games.

“I thought we played a really good team game; we haven’t been getting the bounces as of late, we’ve been in a bit of a rut, but it was good to get the two points,” said Casey on tonight’s effort. “We have to find a way to carry this in to our next stretch of games.”

The Foreurs would start the scoring in the first period. Nathan Gaucher would bang at a loose puck in front of Welsh that would bounce over his shoulder and in to the net. For the 18-year-old, that would be his 8th goal of the season.

Xavier Fortin would tie the game in the early portion of a wild second period. The 17-year-old would find a puck at the side of the net and turn and fire it on goal. The puck would find a way between the arm and chest protector of Foreurs starter Francesco Lapenna for Fortin’s sixth goal of the season.

Rudolfs Polcs would restore the Foreurs lead before Casey got involved. The 19-year-old veteran would take over the game in the second period, scoring two straight goals for his eighth and ninth goals of the year.

For a team who has been searching for consistent scoring somewhere in the lineup, Hulton was happy to see that tonight it came from Casey.

“You need a veteran catalyst to drive the ship, and Thomas was that tonight,” said Hulton. “When he’s dancing like that on his feet and he’s going, he’s really effective. He’s been slowly coming and he’s now starting to heat up.”

The Foreurs would tie the game before the end of the second and the two teams would lock horns all through the third, jockeying hard for the victory. The game wouldn’t yield a victor until the extra frame; Zac Beauregard would pounce on a turnover and streak in 2-on-0 with Casey. He’d feed Casey and he’d make no mistake, burying his third of the game to send the Isles home with the extra point.

Noah Laaouan finished the game with two assists. He now has six points in his last five games.

The Isles are back home on Sunday afternoon to take on the Halifax Mooseheads in our annual Teddy Bear Toss game. Bring your stuffed animals to the rink and when the Isles score their first goal of the game, let them fly from the sky and hit the ice. All stuffed animals will be donated to to the Prince Edward Island Police Association to be distributed to families in need across the island. Tickets are available at the Eastlink Centre box office, by phone at 902-629-6625, or online at https://boxoffice.eastlinkcentrepei.com