Cataractes quiet the crowd in game one against the Isles 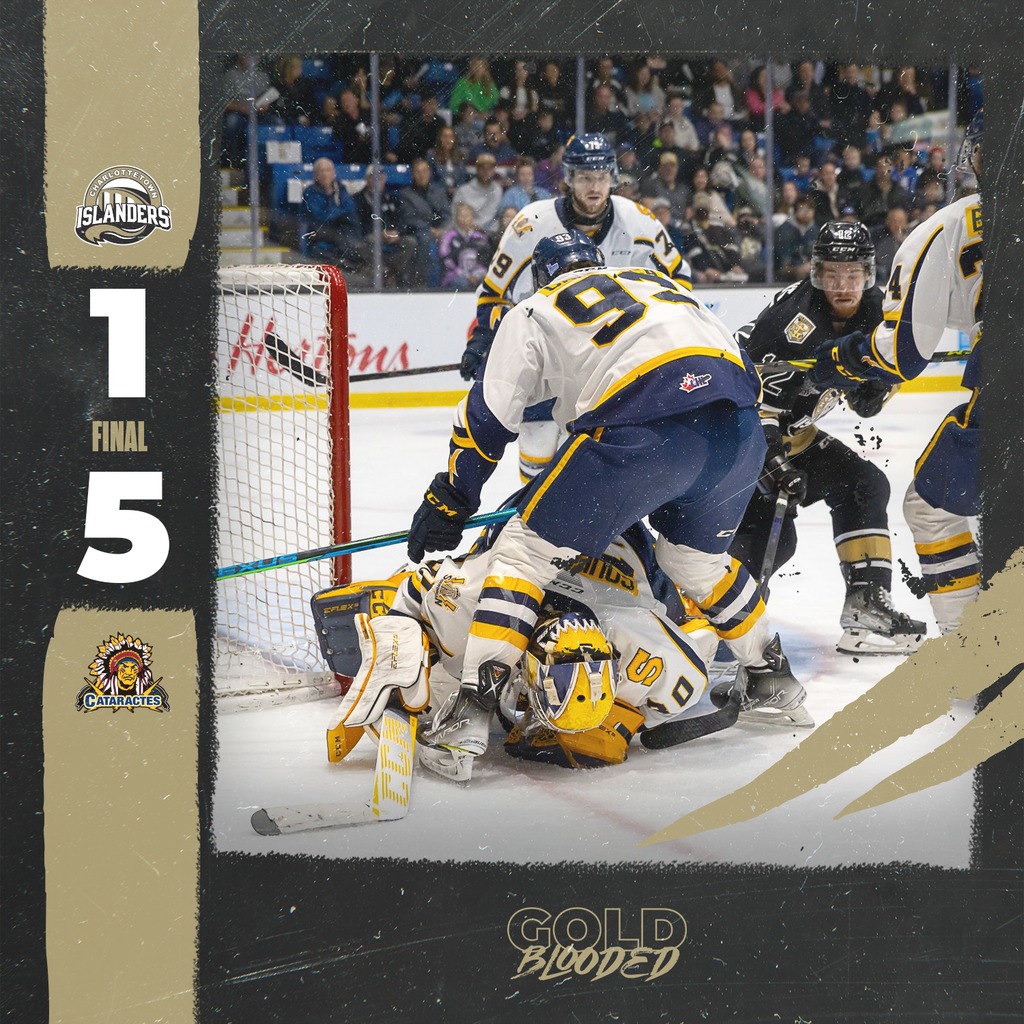 The President Cup finals, a place that no PEI major junior franchise has stepped foot in throughout the history of the QMJHL. Fans who supported the Abbies, Rocket, and now Islanders sit on the edge of their seat as their stomachs growl for the first taste of finals action our Island has ever seen. The past years of heartbreak have led up to this moment and finally, it’s here. Game one of the President Cup finals got underway this evening at 7 pm as the Shawinigan Cataractes rolled into the Eastlink Centre to kick off this best-of-seven finals series. The scene in the Eastlink Centre was one no Islander has ever seen, fans flocked the arena as soon as the doors opened at 6 pm to take their seats and await the biggest hockey show we will have ever seen. When the puck dropped on the finals at 7 pm, the energy in our barn was something you dream of in a sports setting.

The opening frame was one of the tightest periods of hockey we’ve seen all season. There were only five shots on goal after the first fifteen minutes of the game. Unfortunately, for the Eastlink Centres sold-out crowd, the Cataractes struck first to quiet Isles faithful down a tad. Pierrick Dube was able to snipe it short-side past the glove of Lapenna for the first goal of the 2022 President Cup finals at 16:40 into the frame. The assists were Martin Has and Mavrik Bourque. The Islanders weren’t ready to go into the first break though without getting their fans on their feet. At 19:24 into the opening twenty minutes, it was our captain Brett Budgell tallying his 10th of the post-season to get the Islanders on the board. Budgell cleaned up a net-front rebound off a shot from the point and swept it through the crease and into the back of the net to tie the game up before the break. Noah Laaouan and Drew Elliott were the helping hands. The Eastlink Centre went wild for their boys on what was the first ever goal in the finals for the Islanders franchise and it took us to the first break tied at 1’s.

Shots were 10-5 for the Isles after one.

The second period, sadly, didn’t look anything like the Islanders team we saw in the opening frame. Some penalty trouble and sloppy defensive work led to the Cataractes taking the lead. At 1:23 into the second, Bourque found Bourgeault in the left dot down low and passed it to him across the ice where Bourgeault ripped a wrister past the glove of Lapenna on the PP. Bourque and Jordan Tourigny were the helpers. Then, at 9:47 into the second, Bourgeault cashed in again for his 9th of the playoffs and put his team up 3-1. Bourgeault picked up his own rebound in the crease and pounded it into the open side of the net. Assisting on the tally were Pierrick Dube and Jordan Tourigny. To cap off the middle frames scoring, it was Lou-Felix Denis potting his second of the playoffs. Denis finished off a cross-crease pass on a 2-on-1 break-in by tapping it past the right outstretched pad of Lapenna. Shawinigan’s fourth goal was assisted on by Daniel Agostino and Max Ledoux. The buzzer sounded on the middle frame and a stunned Isles squad headed to the dressing room to try and recoup to bounce back in the third.

Shots were 18-16 for the Islanders after forty.

The second period would prove to be the momentum shifter in this one. The Cataractes were just plain and simple the much better team tonight. They brought out with them the game they wanted to play and the Islanders simply didn’t bring a strong effort and when you’re in the finals that shows. The Cataractes would add one goal in the final frame to cement a 5-1 victory. At 14:27 into the third, Maverick Bourque absolutely ripped a shot home putting it top shelf on the powerplay. Jordan Tourigny and Olivier Nadeau were the helpers. That goal started to drive the packed Eastlink Centre crowd to the exits as they could only hope for a better showing from their team tomorrow evening.

Final shots were 29-28 for Shawinigan.

Tomorrow, that’s all any Islanders fan wants to think about right now. The first period looked promising for the Islanders, they led in shots and scored a late goal to ignite the crowd and enter the first break tied. Then the second frame came along and proved killer for any Isles player and their fans. Shawinigan only got stronger as the game went on and the Isles fell back on their heels further and further as the clock droned on. Give credit to the Cataractes, they came into an away barn for game one and controlled the tempo for forty minutes. Now, the refresh button will be hit harder than ever for Charlottetown as they need to wake up and come out hard tomorrow. Dropping one at home isn’t ideal but ok, but dropping the first two games of a series at home, is a big no-no. Let’s hope the life of the party himself Xavier Simoneau and his presence on the ice, is enough to inject enough adrenaline throughout that dressing room to come out fighting like a starving pack of wolves in game two.