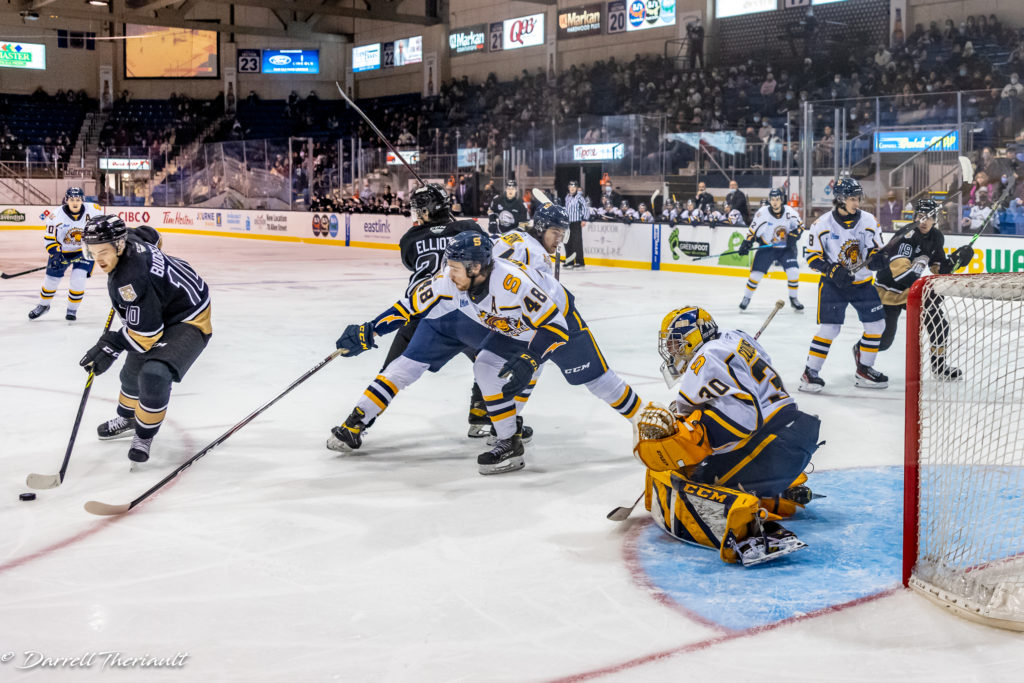 Finally, the word that rang through the heads of all Islanders fans after the team’s extraordinary performance got the result it deserved. After back-to-back heartbreaking losses, the Isles put on a clinic to beat the Cataractes 7-0 in game five. An incredible display of offense will be what most people see with the score at night’s end. However, it was how strong the Isles defensive game, puck control, and chemistry were throughout the night that really led them to such a dominant victory. Anytime you register 47 shots in an away building, especially in a game of that magnitude you know something is clicking. It should also be noted that the Isles limited Shawinigan to just 16 shots all game, the lowest yet in this series. The Isles absolutely dominated puck possession the entire game and know it will take another similar effort to last night to make this series 3-2.

“Obviously, it was a do-or-die situation for us as it’s going to be the rest of the way so we want to win. It was important to play a solid game. I think we have played a couple of solid games before last night and just obviously had a couple of heartbreaking losses but I think it was a really solid effort last night from everybody. We’re just taking it one game at a time and hopefully carry that momentum from last game into game 5.” Noah Laaouan said when asked how it felt to finally break through for a win in the series.

“Well, yeah, I think we carried over the good parts of a couple previous games as well so ya I think the good things we did we can build on.” Jim Hulton said when asked if he believes the Isles will carry confidence with them after game 4 and into game 5.

Unfortunately, I don’t have the exact time on attack numbers from last night but I assure you if I did, the number would astonish you. The Isles spent a very large chunk of the game playing in the offensive zone and allowed less than ten attempts for Shawinigan to control the puck in the Charlottetown end. Out of the Cataractes 16 shots, only 5 were ruled to be dangerous attempts. A truly remarkable stat for a game of that magnitude and being down 3-0 in the series to stay as confident in their game as the Isles have.

“We know we’re going to have to be better. The Cataractes will obviously come back with a much better effort here in game five. We’re extremely confident in our group, we have been all year and we’ve had a great regular season and great playoffs and we don’t plan on ending it tomorrow night.” Brett Budgell said when asked how confident they are that they can shut the Cataractes down again in game 5. “I think the biggest thing we’ve had to focus on is shutting down a single line. Bourque and Bourgeault are a completely different situation than we faced against Sherbrooke, it’s a massive test against them. Our defense has gotten a lot of action and I think that’s been our biggest adjustment in this series.” Budgell said on the biggest adjustment made for the Isles since game 1.

“I think so, I think gradually with every passing game in a series you learn more about yourself and your opponent. I think now we understand how important it is to take care of those top-end guys. You have to be aware at all times when they’re on the ice, we were much better last night than we had been previously and we’ll have to be even better tomorrow.” Jim Hulton said when asked if he believes his team can shut down the Cataractes again in game 5.

When it comes to winning a league championship, you have to improve and level up your game with each passing day. Coaches and teams have to adapt to what they’ve seen from their opponent and know what they’ll have to work on to match their competitor’s energy. The Isles have gotten better with each game in this series, drastically between games one and two, and small improvements from game two forward to finally earn that W in game four. Yet the Islanders still believe there is another gear left to hit after an incredible game four showing.

“Yes I do, I don’t think we’ve played a total A-game or A+-game yet, and to win a championship you have to have an A+-game so I certainly think there is another level we can get to.” Jim Hulton said when asked if the Isles have yet another gear to level up to.

“Certainly ya, it’s definitely huge to not only get the win but to also have a lot of guys put up points and have a good night and finish the night with a shutout. When you have big point nights like that and shutouts it always boosts the confidence in a group and certainly it’s great to always get the win no matter what. The score resets for game five however so we’re going to focus on that now because it’s a brand new game.” Brett Budgell said when asked if the Isles will carry confidence over from game 4 into game 5 with them. “I think game four was one of our best games all year, I thought it was a solid sixty minutes but I do think we still have another gear to go to.”

I have to give a shoutout to the Islanders 5th line as well who have been excellent in this finals series, that 5th line is you, the Isles fans. Not only did you fill the rink for games one and two but you guys sold out game five in just one hour. When the box office opened its windows at 11 am, a line was wrapped around the lobby waiting for their ticket. At just 12:13 pm this afternoon, I received a text from Jason MacLean asking me to post on our socials that the game had been sold out. I was extremely proud to be not only a member of such a high-class organization, but a fan of the Islanders and what this Island has done to support them on their finals run.

“Ya certainly. Going away to rinks in Quebec is cool to see the atmosphere up there but there is nothing like playing in front of a home crowd. To see the support from the community to sell out in less than an hour is phenomenal. We’re really excited to get playing tomorrow night and we’re really grateful and appreciative for the support the community has given us. Brett Budgell said when asked if the team is excited to be back in front of a sold-out Eastlink Centre.

“I think it’s going to be awesome! You know Charlottetown has waited a long time for finals hockey and we’re really hoping that we can keep the momentum going from game four and carry it into game five. It’s going to be awesome to see all the fans and support, and see how loud and excited everybody is in the Eastlink Centre.” Noah Laaouan said when asked about the excitement in coming back home for game 5.

The frozen biscuit is set to drop at 5 pm this evening on game five, Shawinigan currently leads the best-of-seven finals 3-1. The Cataractes will also be without defenseman Zachary Massicotte in game 5 as he received a one-game suspension for his hit on Boyd in the second period of game 4.

Be LOUD this evening Isles fans as your boys in black and harvest gold will look to push this series back to Shawinigan with a win in game 5!