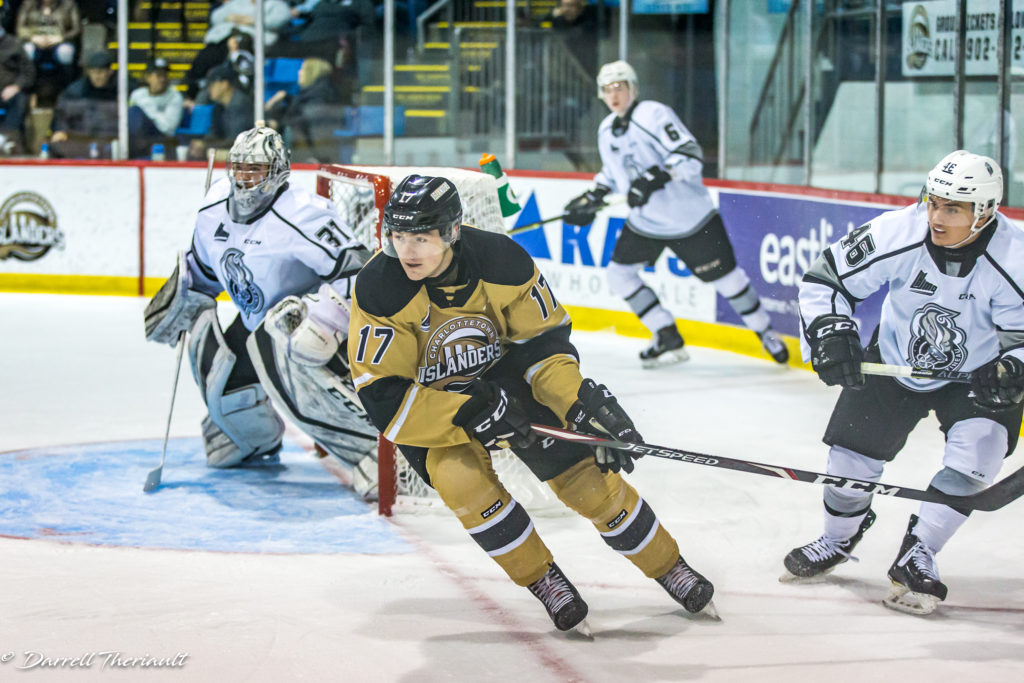 The Charlottetown Islanders fell victim to good goaltending and a highly-touted rookie.

16-year-old Zach Dean took over the third period, scoring a hat trick in the final frame and adding an assist, while Kieran Craig also added four points of his own, as the Gatineau Olympiques defeated the Islanders 6-2 on Friday night.

The story at first was how the Islanders couldn’t seem to find a solution to Olympiques starter Remi Poirier. the 18-year-old netminder, who shut out the Islanders back on Remembrance Day in Charlottetown, was back on the ball once again tonight, turning aside every shot the Islanders put on goal.

In the meantime, Gatineau would find their way on to the board in the first period. Kieran Craig would force a turnover amidst an Islanders breakout, leading to a partial 2-on-1 between Manix Landry and Evan MacKinnon. MacKinnon would finish off the play for Gatineau, giving the Sackville, NB native his seventh goal as a member of the Olympiques.

While Poirier kept his strong play up in the second, Gatineau would capitalize on another opportunity in the Islanders’ end. Pier-Olivier Roy would get his stick on a cross-ice pass from Craig and deflect the puck past Welsh, giving the 17-year-old his 11th goal on the season.

The third period was all Zach Dean, as the Newfoundland native would get on the board twice in a row in short order to start the period. His second goal was a great individual effort to drive wide around the net before completing the wraparound on Welsh, who gave way to Jacob Goobie to finish the game.

Thomas Casey would finally solve Poirier, scoring twice on a four-minute double minor penalty, but it was too little, too late. Craig would add a goal before Dean completed the hat trick in the final minute of the game, securing the Gatineau victory.

Lukas Cormier would record two assists for Charlottetown, while Nikita Alexandrov and Cedric Desruisseaux would pick up single assists.

The Islanders won’t have to wait long to get back on the ice, as they’ll continue their Quebec road trip tomorrow against Xavier Simoneau and the Drummondville Voltigeurs. Puck drop is at 8:00pm Atlantic; join George Matthews and Norman Beck live on Ocean 100 for all the action!