Desruisseaux and Laaouan lead the charge as Isles win yet again 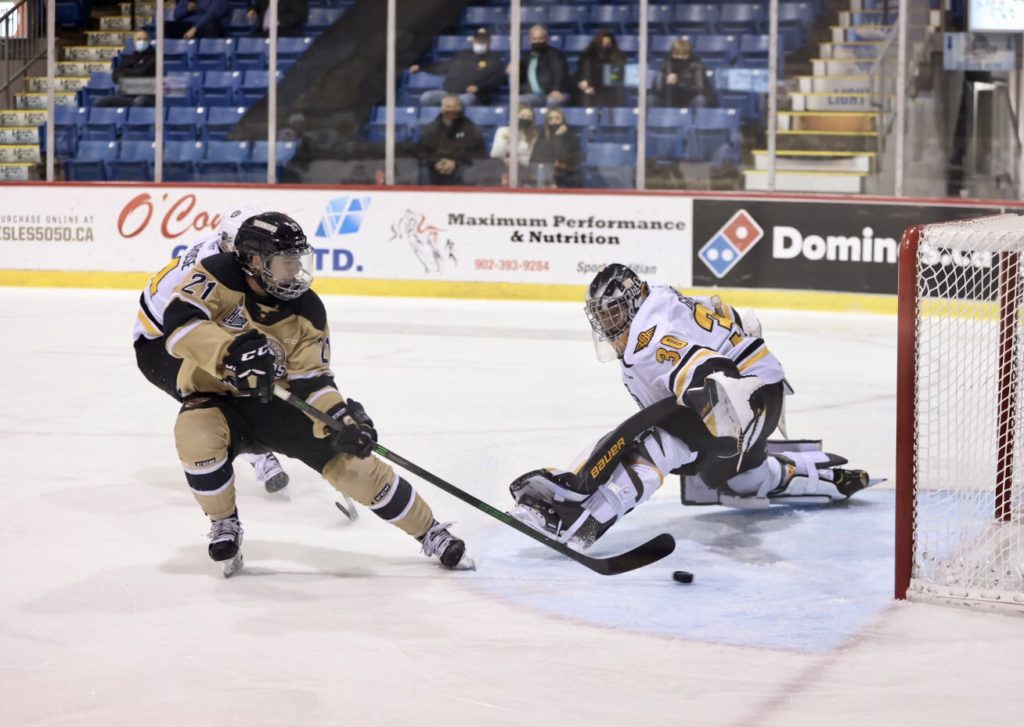 Very few players have done what Cedric Desruisseaux has done.

The 20-year-old from Victoriaville, Quebec continued his incredible start to his final junior campaign, notching his 12th straight game with at least one goal, tying Pierre-Marc Bouchard for the second-longest such streak in modern day QMJHL history. Desruisseaux recorded two goals and an assist while Noah Laaouan recorded a goal and two assists as your Islanders thwarted a late third period comeback to defeat the Cape Breton Eagles 4-3 on Saturday night.

The game nearly got away from the Isles in the late goings of the game as Felix Lafrance scored in the final minutes of the third period to pull the Eagles within one. A total team effort to keep the puck out of the net ends up being the difference in the dying moments, ultimately giving the Isles their eleventh victory on the season.

“I don’t think we had our strongest game overall. We ran around a little bit in the defensive zone, we lacked in that area a little bit,” said Laaouan on his team’s performance. “At the end of the day though, good teams find a way to win. At the end we got some good blocked shots from the boys that held us in there and Colten made some big stops along the way. It was a team effort from beginning to end but there’s still some things we can clean up on.”

“I think both teams were tired and I think it showed,” added Jim Hulton on the game. “Our intensity level wasn’t there but Cape was also better. We knew they were going to put a push on and they were better, but we stuck with it, we were opportunistic tonight, and we found a way to win.”

Thomas Casey got the scoring started in the first period, receiving a pass from Keiran Gallant in tight on Eagles starter William Grimard and going upstairs for his eleventh goal on the season to make it 1-0 for Charlottetown. That score would hold until early in the second period, when on a 2-on-1 opportunity, Desruisseaux would hold the puck and wire a wristshot between the wickets of Grimard for his 16th goal of the season.

Shawn Element would get one back for Cape Breton in the second before Desruisseaux struck again. Streaking down the wing on a partial breakaway, Desruisseaux would get around the defender and make a move on Grimard before tucking the puck low for his 17th goal on the season.

Nathan Larose would pull the Eagles back within one early in the third but Laaouan would put it out of reach at the halfway point of the game. On a scramble in front of the Eagles net on the powerplay, Laaouan would jump on a rebound and make no mistake for his second goal on the season.

Colten Ellis made 29 saves for his ninth straight victory and picked up yet another assist on Desruisseaux’s first goal. Lukas Cormier picked up two assists while Gallant and William Trudeau picked up single helpers.

Following adjustments to the schedule, the next Charlottetown Islanders game is this Wednesday, November 18th. at 7:00pm versus the Halifax Mooseheads. Season ticket holders are asked to use their ticket for the Monday, December 28th game to enter the building. You can tune in to the action outside of the rink with Fair Isle Ford Isles Radio, or by visiting the Factory Downtown or Boston Pizza!