From Out of The Shadows: Jacob Goobie 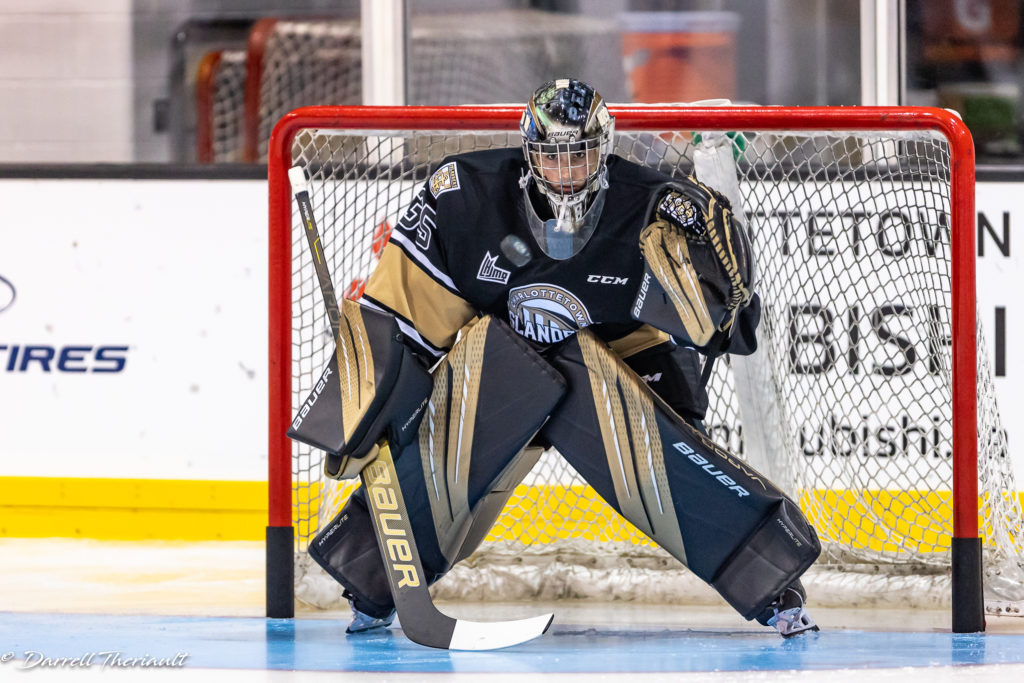 Over the years the Charlottetown Islanders have had a long list of fan-favorite goalies. After all, when it comes to being a good backstop, it’s easy to steal the hearts of fans and dawn the cape.

From the time I was growing up watching Mason McDonald, to the overwhelming praise Matthew Welsh received from the Island, the crowd has known the name they will chant. Now after Welsh aged out of the QMJHL, and a brief stint from Colten Ellis came to a disappointing semi-final knockout end, it’s time for someone new to take the lead.

From out of the shadows, Jacob Goobie. Islanders fans have seen Goobie for the past two years since being drafted in 2019. Making 33 starts from 2019-2021 and amassing a .877 SV% and a 3.21 GAA, Goobie was a steady backup when called upon. Now, in his third season with Charlottetown, Goobie is ready to step into the spotlight.

“Ever since I have come to the Island the fans have been really supportive and very welcoming. I think that their passion for our team makes us want to win even more. There will always be a bit of pressure being a goalie, you have to find a way to embrace and enjoy the pressure while learning to play through it,” said Goobie.

Goaltending coach Paul Drew has been with the team since 2013, he’s seen every goalie come through this system since the rebrand as the Charlottetown Islanders.

“Jacob has always been keen on working hard. I believe after his first two years of watching starters he’s learned how to ramp up his intensity to match that of the league. We’ve seen a big change in his compete and 2nd effort puck battles, that accounts to his desire to be better” commented Drew.

Since starting the season  3-0, the Islanders have hit a bit of a snag the last two games only accumulating 1 goal over 120 minutes of play. Despite the recent setback, Goobie has stood tall starting 4 of the 5 games and recording a .927 SA% to go along with a 2.01 GAA. One thing Goobie credits his solid start to has been the focus given to training his body for the starting role.

“There hasn’t been a big change in how I train, the only major difference is I’m doing a lot more work on my body to keep it in top shape for games. This is so I give myself the best chance to stay healthy and uninjured.”

Pressure and focus are two things that can make or break a goaltender, if you stay complacent there’s never any room for improvement. After making it to the QMJHL semi-finals last year, for Goobie, the team can’t go anywhere but up.

“My hopes for this season is to win the Presidents Cup and then the Memorial Cup after that. Being so close to the Presidents Cup final last year left a bitter taste in our mouths and we are coming back with that experience and a fierce drive to win.”

“I think his focus is providing quality starts right now. If he can continue to do that, success for our team will hopefully happen” says Drew. “We have two solid goalies who have shown they can help the team win and I think that’s important for Jacob to enjoy this process of taking on more games.”

After playing behind seasoned veterans for two years and working with a goaltending coach who’s seen them all, Goobie has all the tools he needs to thrive as a starting goalie. “I was able to watch and learn from them while watching their games and practice techniques, seeing how they compete and how they read the play as it unfolds in front of them. One big thing I took away from those guys was how they took care of their bodies. The little things make a huge difference.”

You can see Goobie and the Islanders back in action this Saturday night when Mavrik Bourque and the Shawinigan Cataractes make their way to the Eastlink Centre for a 7 pm puck drop. Tickets are available at the Eastlink Centre Box Office in person (Monday to Friday 11 am to 5 pm), online, or by phone at 902.629.6625.

Isles Command Game In Front Of A Rocking Eastlink Centre Crowd vs. Titan
6 days ago