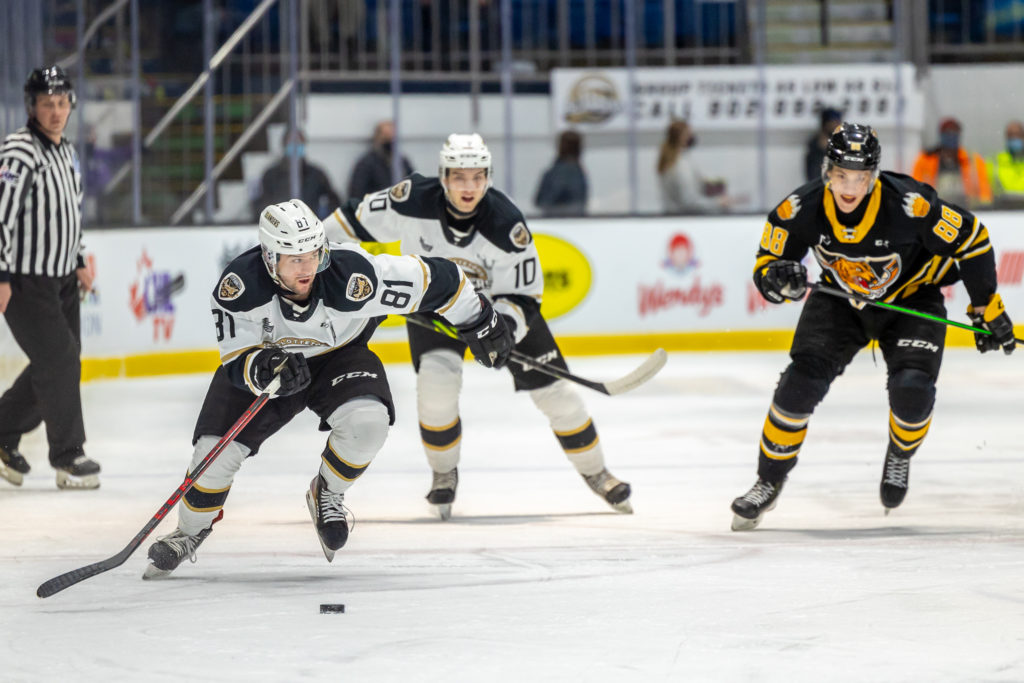 So far this season, the Islanders are 6-1-1-0 in Quebec. That’s an impressive road stat, especially considering how tough it can be going up to Quebec for days at a time as a Maritime team. It’s also a stat that the Isles will look to improve upon as they look to get back into a groove after a rough homestand. Charlottetown went 2-2 during the recent stretch of games at the Eastlink Centre, blowing a late lead in both of those losses. Jim Hulton and his team both knew that work had to be done to tighten things up and right the ship before embarking on this Quebec road trip. We’ll find out at 8 pm tonight if the Islanders have rediscovered the mojo that has made them such a dominant force for the majority of this season. The Isles will be entering the Colisee Desjardins tonight for a clash with the Victoriaville Tigres.

The season series between these two is currently led 1-0 by the Islanders after they took the first bout back on February 18th, 7-2. Fans will remember that matchup as a spirited affair that’s fireworks led to the Isles only having three players left on the bench when the final buzzer sounded.

The Tigres are currently the victims of a six-game losing streak. They haven’t won a game since February 12th when they beat the Drakkar 5-2 on home ice. With a record of 14-21-3-2, Victoriaville currently sits in 16th place overall with 33 points, three points ahead of the Drakkar who sit second-worst in the league. A player that caught my eye when the Tigres came to town was second-year forward Loick Daigle. Daigle stands at just five-foot-nine but had a pesky way to his game, almost a Brad Marchand esque feel. He could grind in deep but also had an established scoring aspect to his game. This season, Loick has recorded thirteen goals and the same amount of assists for 26 points, a large improvement from his three points last season although he has played nearly double the games this year. Victoriaville’s number 24 is one to keep your eye on if you’re tuned in to tonight’s action.

The Islanders have been knocked into second place overall in the QMJHL as the Quebec Remparts have passed them in points by two. Although, it is worth noting that the Isles do have four games in hand on the Remparts. With a record of 28-8-3-0 and 59 total points, Charlottetown sits sandwiched between the Remparts and Cataractes in the QMJHL standings. These next two games will be huge for the Isles in trying to climb back into first place as they take on the Cataractes tomorrow night. Your Isles player to watch tonight is our scoring leader Xavier Simoneau. Simoneau is just short of a two-point per game pace recording 61 points in 32 games. Charlottetown’s number 81 also sits just two assists shy of 200 total in his career, a big milestone and one to watch out for tonight.

Once again, puck drop is set for 8 pm tonight. For those not able to watch the action you can always listen live to the play-by-play with George Matthews and Cory Arsenault on Q93 FM or Q93.rocks!

Save 50% this weekend on IslesShop.com!
1 week ago