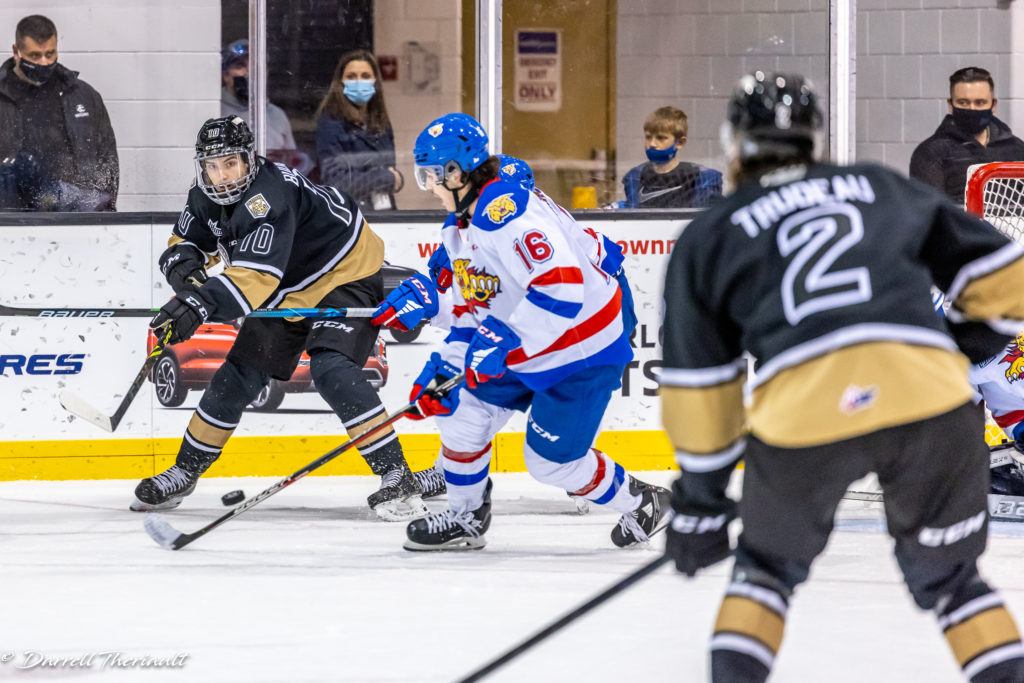 We’re coming home, to the place where we belong! Your Charlottetown Islanders are finally back at the Eastlink Centre this evening for their first bout at home since October 30th. Fittingly enough tonight’s game is against the Moncton Wildcats who were the same opponent they faced on the 30th before venturing off on the five-game road trip. A long road trip that was very successful for the Isles as they captured eight of a possible ten points going four for five on the stretch. Now, the Islanders kick off a four-game homestand in fashion this evening as its student night at the Eastlink Centre, all tickets and drinks(19+) are $4 for those attending school.

So far, that Halloween eve match-up has been the only one between these Maritime foes to this point of the season. Unfortunately for the Islanders, that match-up ended in their first extra-time loss of the season when they fell 4-3 in overtime. It was Wildcats Vincent Labelle scoring the game-winner on the first shot of the extra frame and earning himself first star. The Islanders efforts shouldn’t go unnoticed in that game however as it was late third-period heroics from Xavier Simoneau, and sparks from Jakub Brabenec and Patrick Guay that were able to get them to overtime. It was one of the more lively matchups to come to the Eastlink Centre so far this season and fans can count on more of the same this time around, just hopefully with a better result for Charlottetown.

For a young and rebuilding Wildcats squad, it’s been a rather positive start to the 2021-22 campaign. Moncton sits at 10-5-1-1 to this point on the year with the last outing being a 4-3 overtime loss to the bottom of the league Cape Breton Eagles. Leading the charge for the Cats’ to this point has been a player they acquired from Victoriaville earlier this season in Brooklyn Kalmikov. Between the two teams, this season Kalmikov has tallied ten goals and eleven assists for a total of 21 points. This will also be Isles fans second look at Wildcats alumni and St. Louis Blues winger Ivan Barbashev’s younger brother Maxim. Maxim Barbashev has eleven points in fourteen games for Moncton this season including four goals.

Charlottetown’s last outing was the road trip capper over in Halifax on Sunday where they prevailed 6-4. The game was highlighted by the efforts of Patrick Guay who scored the Islanders first two goals of the game as well as assisting on the game-winning and insurance goals. To this point on the year, it’s Xavier Simoneau and his playmaking skills leading the charge for the Isles. Simoneau is nearly on a two-point per game pace this season recording a league fourth-best 28 points on the campaign. Xavier also currently leads all players in assists to this point with 21. Simoneau has also let his grittier side show this season currently leading the team in penalty minutes as well.

The Islanders will be looking to send fans home happy this time against Moncton while also building upon their current three-game win streak. While the Wildcats look to improve upon their good start and bounce back from a hard overtime loss against the Eagles. With student night on tonight and fans eager to get back into the rink, we are sure to be set up for a rocking environment for this Thursday night clash.

Puck drop is set for 7 pm this evening with doors opening at 6 pm. Tickets are available at the Eastlink Centre Box Office in person (Monday to Friday 11 am to 5 pm) as well as before game time, online, or by phone at 902.629.6625. Make sure to get your tickets early and come on out to help your boys in black and harvest gold protect the bridge.