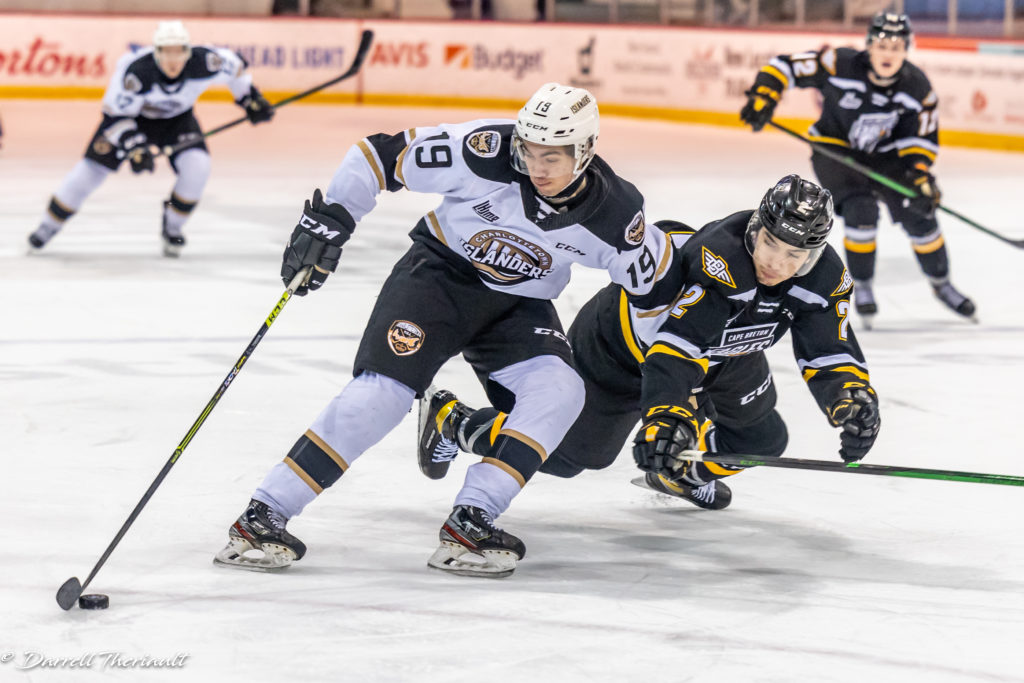 A fire warning is in effect. Jim Hulton’s juggling has seemed to have finally found a spark in the Islanders offensive game. Sunday’s visit to Titan territory might not have had the desired outcome, however, it was the first time the Isles were able to find the back of the net more than once over 12 periods of play. It’s still early in the 2021-22 campaign for panic, not that these points don’t matter but we’d rather see the kinks worked out now rather than in February or March.

With the Isles gaining back some confidence in their offensive abilities and Lukas Cormier getting all fired up, Islanders fans now turn their sights to Cape Breton. We’ll see the boys enter the Eagles nest as Jim Hulton and the Isles look to defeat the birds and get back to their early winning ways.

This is the first time since February 2020 that the Islanders have lost consecutive games. The Isles found themselves on a 4 game losing skid similar to this one. Now, after getting some pep in their step against the Titan the Isles look to avoid setting a new skid high since the 2019-20 campaign. Lukas Cormier was a dominant force in Sunday’s game as he and Noah Laaouan continue to prove their chemistry to the fans. Cormier was responsible for two out of the three Isles goals with Noah Laaouan recording his seventh assist on the year tying him for the team lead in points with Xavier Simoneau at eight. While Lukas Cormier, now sitting with four points on the season, looks to keep the Lukas Cormier show rolling tonight.

Cape Breton sits with a record of 2-2-3-1 through the halfway mark of October. The Eagles last outing was a losing effort at the hands of Maritime rival the Saint John Sea Dogs via a 4-3 overtime final. Cape Breton is in a similar position as the Isles, eager to get into a groove and begin winning games consistently while attempting to make waves in the Maritime division. Currently being lead in points by Nicholas Girouard, the Eagles turn again to their seasoned veteran for offensive power as he is off to the fastest start of his career.

Matis Ouellet returned to the lineup Sunday in Acadie-Bathurst, the Islanders first-round pick still searches for his first QMJHL point. Ouellet has appeared in 4 games thus far. Xavier Simoneau is unlikely to suit up in Cape Breton, Simoneau left the Thanksgiving Monday game against Saint John with an apparent upper-body injury. Simoneau hopes to be available for the Islanders busy weekend in Charlottetown.

Isles captain Brett Budgell looks to add onto his 4 goal team-high this season tonight. Even with the loss, Brett had a forceful game against the Titan getting gritty and under the skin of the opposition. Budgell and Cormier are names to pay attention to in this mid-week matchup. You can’t forget the good defensive and playmaking efforts of Noah Laaouan either. Laaouan’s play along with his chemistry with Cormier has made for a strong number one D-pairing,