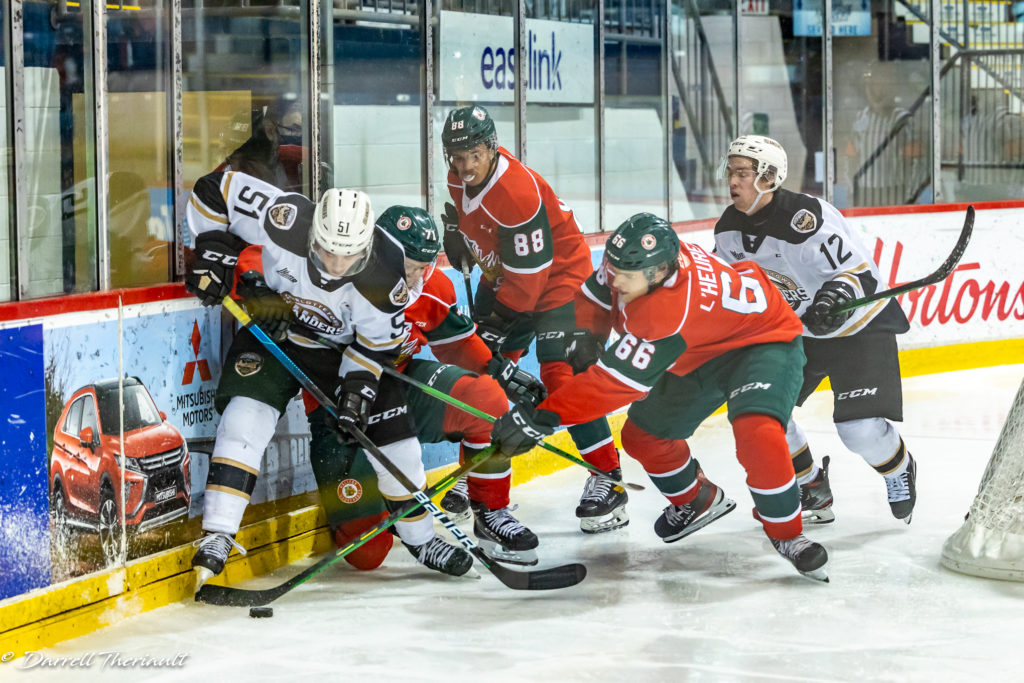 You couldn’t ask for a better opening weekend than the Islanders accomplished going 2-0 on the young season. The Islanders were able to set the tone early by taking a pair of victories from this year’s Memorial Cup hosts the Saint John Sea Dogs. Now, our sights turn to another familiar Maritime foe, the Halifax Mooseheads. The Eastlink Centre prepares to host game one of the home-at-home weekend series tonight at 7:30 pm. With the team’s veterans cooking early in the season, the Abby horn is sure to be heard around Charlottetown again tonight.

Islanders captain Brett Budgell and fellow veteran teammate Noah Laaouan are off to a lightning-quick start this year. Budgell has shown his offensive strength early delivering 3 beautiful goals in two games, you can count on Halifax netminders to be feeling his presence early this weekend. You can’t brush Laaouan under the rug however, as he’s been a crucial set-up man thus far. Noah’s vision and hockey IQ have been allowing him to move the puck around with ease, seeming as if he knows where the puck needs to be before the opposing defense even knows he has it. Recording 4 assists and a goal in the first 2 contests, Laaouan will look to keep his early success going when the Mooseheads come to town.

Laaouan and Budgell will look to continue being a solid 1, 2 punch for the front end of the Islanders lineup.

On the other end, the Mooseheads are off to a .500 start to the year. Taking the opener in Cape Breton 3-2, then falling to the Eagles 4-3 via shootout in the opener at the Scotiabank Centre the following night.

The Mooseheads will also get to see some familiar faces back in the lineup this weekend. 2020 fifth-round pick Elliot Desnoyers was returned to Halifax Tuesday following a stint at the Philadelphia Flyers training camp. Nashville Predators 1st round pick Zach L’Heureux will also suit up for the first time this year on Saturday night as his suspension, held over from last season, comes to an end.

The Islanders dominated the season series versus the Mooseheads last year taking 16 out of the 19 contests. The Islanders will be looking to stay on a roll tonight as they look to continue making waves in the Maritime Division. Sitting at number 7 in the CHL’s top 10 team list through week 1, the Isles aim to stay dominant on the climb to the top 3.

Xavier Simoneau and Lukas Cormier are names to keep an eye on this weekend as well. Simoneau has tallied 5 points with a pair of empty-net goals for a hot start out of the gate and Cormier looks to get rolling early in the year and add onto his points tally recording one assist thus far.

Matis Ouellet is the only Islander out right now currently listed as day-to-day.