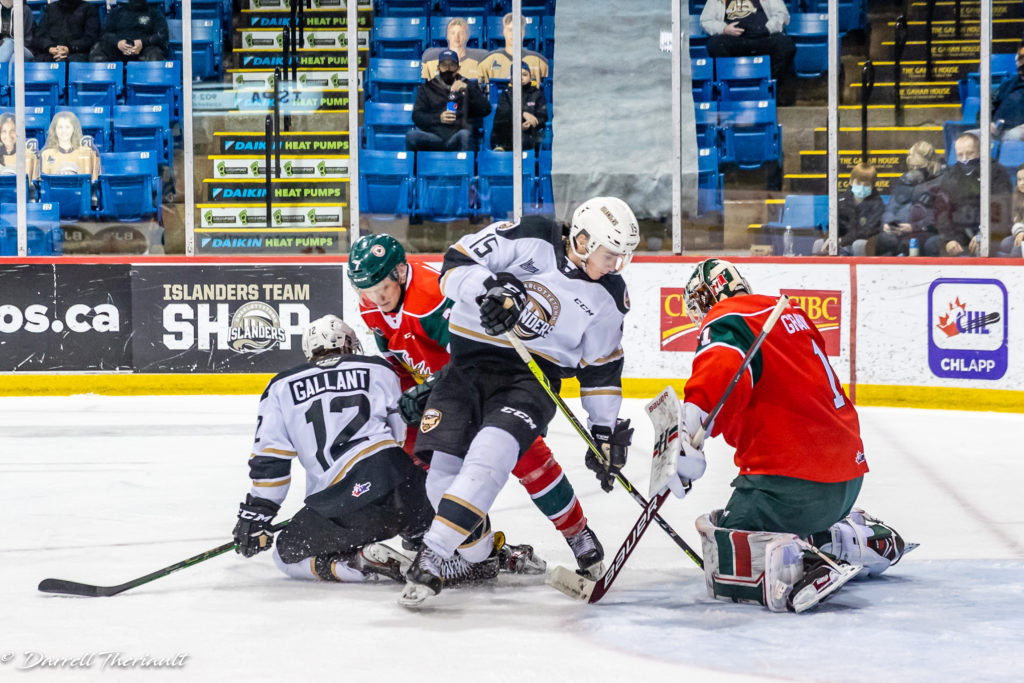 Fans of the Charlottetown Islanders have to be pleased with the start of the 2021-22 campaign thus far. Through the first 3 bouts of the season, the Islanders are outscoring opponents 13-5. This team is exciting and it’s not hard to tell that they will be a ferocious opponent for teams not only in the Maritime Division but across the entire QMJHL.

After taking care of business last night in Charlottetown the Islanders prepare to enter Scotiabank Centre tonight for the Mooseheads part of the home-at-home weekend series. The Islanders showed why they were able to take 16 of 19 contests against the Mooseheads last night. Even though there won’t be as many games between the two rivals this season, you can expect the Isles to remain just as forceful.

Oliver Satny made a strong QMJHL debut last night stopping 16 of 17 total shots faced. The only smudge on an otherwise terrific Isles debut was an Elliot Desnoyers breakaway goal. Satny was able to shut the original attempt by Desnoyers down but Elliot was able to stick with the rebound and jam it under Satny’s pad.

Jakub Brabenec also showed off some of the skills he developed playing pro hockey in the Czech Republic last year in the win. Brabenec was able to lay a sweet saucer pass right on the blade of Drew Elliott for him to laser it past Mathis Rousseau.

Brett Budgell also kept his red hot start to the year going as he sniped one over the shoulder of Rousseau in the second frame bringing his goal total up to 4 through 3 contests. As well Lukas Cormier cracked the goal column when he tipped one up over the Halifax netminder. The team’s chemistry is quite noticeable in the early going and you can expect it to only continue getting stronger in the locker room.

Ben Boyd and Noah Laaouan have also established themselves as difference-makers on the ice as both have let their physical games show early. Boyd laid down multiple big hits last night even showing a little grin after putting a Mooseheads player to the ice. Noah Laaouan laid a mean open-ice hit right on the Isles centre ice logo that resulted in Laaouan and Desnoyers dropping the gloves.

Overall our first impressions of this Isles squad are very positive. They have shown that they are an elite offensive team who aren’t afraid to take charge while using the body. With the strong performance between the two netminders early this team is going to be a threat to anybody crossing our bridge.

Now sitting pretty at 3-0, the Islanders look to keep the good times rolling as they continue their efforts to pave their way to the top of the standings as they roll into Halifax.

The Mooseheads will also be looking to leap back up to .500 hockey this evening so those who are able to tune in to this one are in for another good night of hockey. Puck drop is set for 7 pm at the Scotiabank Centre.