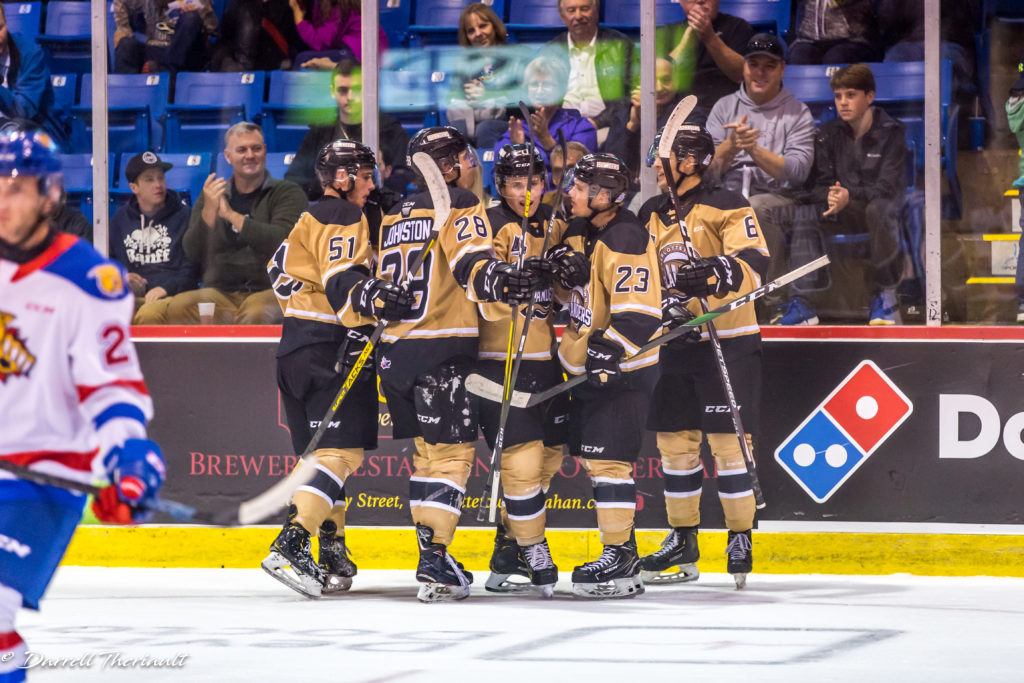 It was a game to remember for Jacob Goobie and William Trudeau.

“It feels amazing.” said Goobie following the victory. “It didn’t really hit me until I sat down in the room and [Matthew] Welsh gave me the game puck.”

The Isles struck late in the first to get on the board, and it was Gaetan Jobin who gave them the lead. The Swiss forward found a juicy rebound after a Nikita Alexandrov shot and went top shelf on Wildcats netminder Olivier Rodrigue for his second goal of the season.

The lead wouldn’t last long though. Alexander Khovanov would tie the game up for Moncton just 45 seconds later, tracking his first shot and firing a second that catches Goobie off guard to make the game 1-1 before the end of 1.

The second period, however, belonged to the Islanders. Liam Peyton would start the scoring in the second stanza after deflecting an Xavier Bernard point shot past Rodrigue for his first goal of the season.

Bernard wasn’t finished there offensively. Midway through the period, the New Jersey Devils prospect would take the Trudeau pass and wire a slapshot from the point, to give him his first of the year also.

Finally, Alexandrov would cap off the period with a goal that banked in off his chest following a Thomas Casey shot. After relentless pressure all period, the Islanders emerged from the first 40 minutes with a 4-1 lead.

The Wildcats would mount a comeback in the third with two goals off the sticks of Jakob Pelletier and 2019 3rd overall pick Zachary L’Heureux, but it would be Trudeau who would put the icing on the cake. The Varennes, QC native, acquired as part of the Pierre-Olivier Joseph trade, would corral a puck at the point and put a hard wrist shot on net that beat Rodrigue cleanly.

From there, the Islanders would tighten up defensively and shut down any Wildcats offense, securing Goobie his first victory.

“Our team played a smart, efficient road game today and got rewarded with a big road win,” said Islanders head coach Jim Hulton. “We are elated for Jacob on his first career start, and win, in the QMJHL. He was steady and strong all game long.”

“Overall, we had solid contributions from all areas and all players.”

The Islanders return to the friendly confines of the Eastlink Centre on Thursday, October 3rd, when they play the Saint John Sea Dogs on Student Night Thursday! Tickets are just $3.50 for students and all 19+ beverages are just $3.50! Tickets can be purchased at the Eastlink Centre box office, by phone at 902-629-6625, or online at https://boxoffice.eastlinkcentrepei.com!