Heartbreak in Charlottetown after a strong Isles performance 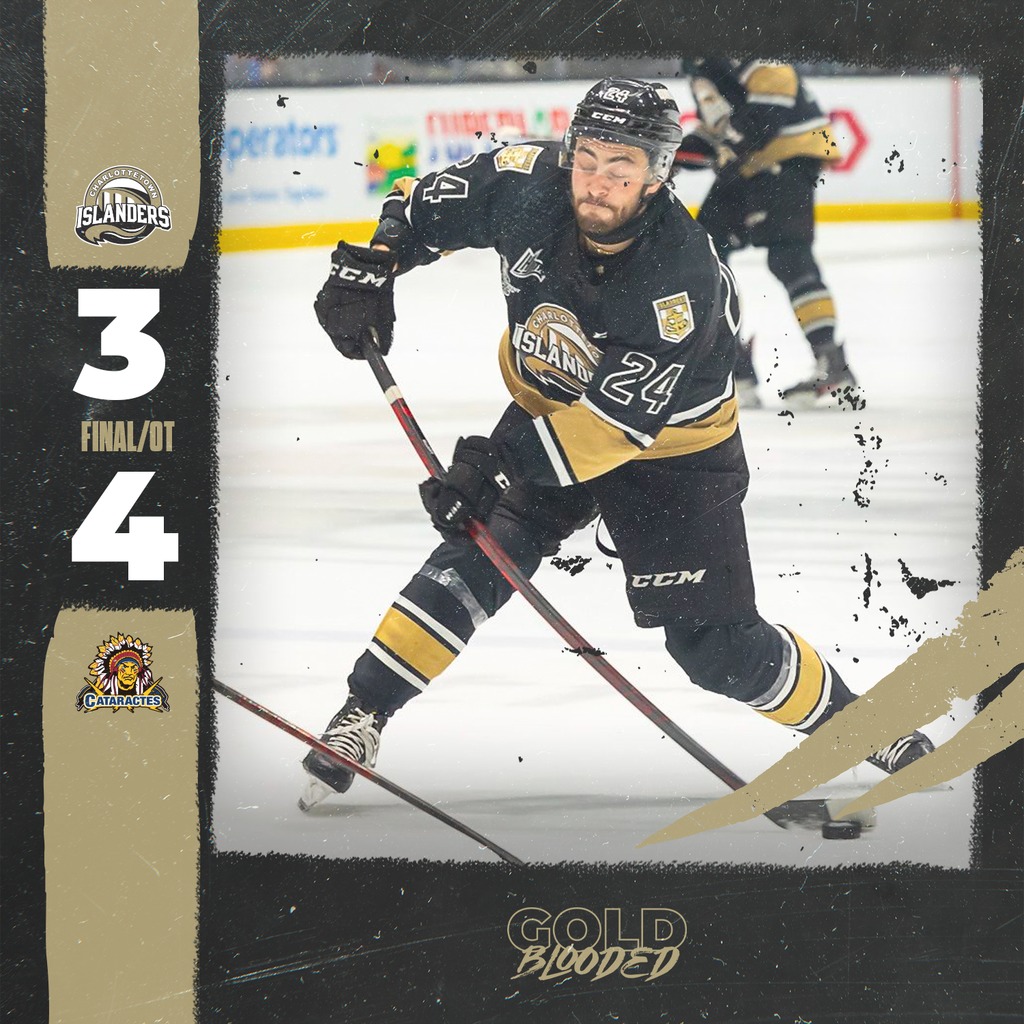 Bounce back, the only thing any Islanders fan could think of following a tough game one performance that led to a 5-1 defeat. The boys who dawn the jersey themselves felt the sting of that loss more than any of us though, it’s never how you want to start a series let alone your first ever finals appearance in franchise history. The focus would shift quickly though, Jim Hulton knew that last night was a lackluster effort and that he would need to straighten his squad out very quick. Now being down 1-0 coming into tonight, the pressure was on the Islanders to at least split the games at home before going up to Shawinigan. The Eastlink Centre filled up once again when the gates opened at 6 pm and the Isles faithful were ready to get behind their boys in black and harvest gold and push them into the driver’s seat. When the frozen biscuit dropped at 7 pm, it was an entirely different Islanders squad than the one we saw last night.

The Islanders were dominant in the opening frame. It looked like night and day the team we saw last night compared to the one that stepped on the ice to play tonight. Even though the Islanders were the more dominant team, Shawinigan’s netminder was solid as a brick wall the entire period. The Cataractes were, unfortunately, the first team to strike the scoreboard in game two as Mavrik Bourque kept showing off his talent to the Charlottetown crowd. He was able to get the puck in the slot and take his time with it before he fired it past a diving Laaouan and over the blocker of Lapenna for his 6th of the playoffs and tonight’s ice breaker. Xavier Bourgeault and Martin Has were the helping hands. The Isles wouldn’t let that derail them though as they stayed strong and true to their game to keep rolling and dominating the pace of play. We went into the first intermission down 1-0.

Shots were 16-5 for the Isles after one.

The Islanders held their pace and maybe even gained some momentum after the first period to come out even harder in the middle frame. The roof wouldn’t stay on the Eastlink Centre for too long though as long-tenured Islanders star D-man Lukas Cormier was the man of the middle frame. Cormier was able to pick up a lucky bounce off the end boards and fire it directly into the open net as Lavallee didn’t even know where the puck was yet. Cormier’s 5th of the playoffs was assisted by Xavier Simoneau. Then at 11:42 on the powerplay, Corms did it again. Cormier sent an absolute rocket from the point and it made its way through all the traffic and low past the glove of Lavallee to make it 2-1 Islanders. The goal was assisted by Xavier Simoneau and Brett Budgell. The Isles were able to hold their first lead of the series right until the final buzzer of the second period. The fans were roaring and so happy for their boys as they gave them a standing ovation as they left the ice for the second intermission.

The Isles led the shots 28-11 after forty minutes.

The Islanders were amazing through two in this one, showing confidence and resiliency out there on the ice despite being against a lot of adversity. Shawinigan is a tough team to play without the officials doing a subpar job at calling this bout. The Cataractes wouldn’t go away in this contest and just a little over halfway through the final frame, they tied it up. Maverick Bourque took a sweet dish right in the slot and was able to fire it past the blocker of Lapenna to make it 2-2. The apples were credited to Charles Beaudoin and Isaac Menard. Then at 18:43 into the final frame, magic seemingly struck for the Islanders off the stick of Dawson Stairs. Stairs got his twig on a shot from the point and redirected it past the blocker arm of Lavallee to put the Islanders up 3-2 late in the game.

That lead was to be tarnished though as at 18:49 into the period, a call made by the linesman on a face-off infraction sent the league’s top powerplay to work and with an extra skater. With just six seconds left on the clock, the Islanders had their lead stolen away when Pierrick Dube wired a wrister over the glove of Lapenna to tie the game up and send us to OT. It only took 2:50 into OT for this game to be ended, it was heartbreakingly off the stick of a Cataractes star though. Xavier Bourgeault was able to beat Franky Lapenna in tight and claim a 2-0 series lead for Shawinigan.

Final shots on goal were 38-22 for the Islanders.

I’m not sure how many of you readers were in the stands, but for those who were, you know where this game went wrong. It feels like the win was stolen from your Charlottetown Islanders by those with whistles and in a finals series, that’s a hard pill to swallow. Especially because this is the first time in franchise history we’ve come this far, it truly was heartbreaking to see the game play out that way. This is a best-of-seven series though, and the Islanders won’t fall because of one game, that’s not the Charlottetown way. Once the emotion of tonight’s hardship wears off, the boys in black and harvest gold will come out stronger and more intense than ever. There is still hockey to play and I’ll be damned if we aren’t back here for game five next Saturday night. Stay hopeful PEI, the heartbreak will pass, and there will be more hockey to come.