In The System | Prospect Update 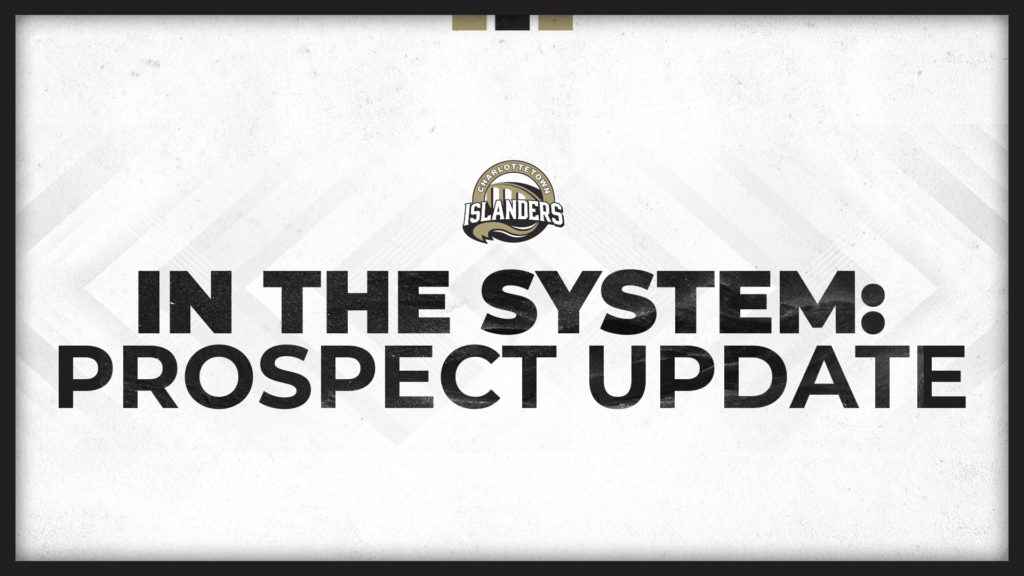 Here’s a quick look at how some of the notable Charlottetown Islanders drafted prospects and affiliate players are faring this season in their respective leagues. The players below were drafted in the last two QMJHL Drafts, with a few already dawning the black and harvest gold jersey for regular-season games.

Below are individual player profiles for each of our top prospects along with comments from Head Maritime Scout & Director of Player Personnel Trevor Birt.

Anton was selected by the Islanders in the 2021 QMJHL Draft as the 57th pick of the 3rd round. Topilnyckyj was called up to fill the void of Lukas Cormier prior to the Christmas break where he appeared in five games going +2. Anton started the year with the Fredericton Caps U18 AAA of the NBPEIMU18HL where the 17-year-old has accumulated nine points in eighteen games holding four goals to his name.

Trevor Birt: Anton is a great young defenseman who did in fact make the Islanders squad out of camp but just felt he wasn’t quite ready to make the transition to QMJHL hockey yet. Topilnyckyj has a strong future with the Isles and is having a great season so far over in Fredericton.

Brett Arsenault is a local boy residing from our province’s capital. Arsenault was taken by the Islanders as pick 63 in round 4 of the 2021 QMJHL Draft. The right-handed centerman is currently playing with the Charlottetown Knights U18 AAA of the NBPEIMU18HL. Thus far Arsenault has suited up for fifteen games, he’s scored six times and recorded three assists for nine total points.

Trevor Birt: Brett has a natural skill in his game and is having a strong season to this point averaging around half a point per game. He is committed to training his game as he works to build up strength and develop his 200-foot game. He is maturing very well as a hockey player and has a quick blade in the faceoff dot. Arsenault is a name that Isles fans will see in the lineup someday.

Nathan Mossey is another Island boy who was drafted by his home province. Mossey was selected by the Isles at pick 93 of round 5 in the QMJHL Draft of 2021. Nathan is a defenseman who favors the right side and is currently playing for the Mount St. Charles Academy 16U AAA of the NEPACK 16U in the United States. Mossey has tallied sixteen assists and three goals over 36 appearances so far this year.

Trevor Birt: Nathan is currently playing over in the U.S and is having a strong season on a really strong team. He is on the top pairing as well as the powerplay and he is currently standing around the 6’0” mark. He is developing his game well over in a strong league and we hope to see him in an Islanders jersey next year.

Jack Flanagan was taken as pick 99 of round 6 in the 2021 QMJHL Draft by the Islanders. Flanagan is a left-catching goaltender who is currently playing with the Mount Academy Saints U18 squad of the CSSHLE U18 league. So far between the pipes this season Flanagan holds a .923 SV% and a 2.62 GAA with a record of 6-0-0.

Trevor Birt: Jack is a guy we’re all really excited about. He’s big and he works hard as well as having good feet for his size and age. Excited to see him work his way into the league.

Mitchell Wagner was taken by the Islanders as the 147th pick in round 8 of the Q Draft. Wagner is a right shot currently playing for the Steele Subaru U18 Major Hockey Club of the NSU18MHL where he has recorded four goals and an assist in four games. Previously this season he had spent nineteen games with the Yarmouth Mariners of the MJAHL tallying two goals and three assists.

Trevor Birt: Mitchell is a very intriguing player as a big right shot. Wagner started the year in Junior A but made his way back to midget because he was hungry for some more minutes. Mitchell is a really good skater and has a vast skill level, a very exciting pick for late in the draft.

Xavier Delage was taken in the 7th round at pick 130 by the Islanders in the 2020 Q Draft. The right-shot defenseman favors the same side to help compliment his shot. Delage is currently playing for the Florida Eels of the USPHL Premier/Elite league where he has tallied three assists in 23 games.

Trevor Birt: Delage is currently playing down in the U.S, he also just ran into the numbers game with the Isles. Xavier’s feet need to just be a tad bit quicker and if that happens I could see him playing here at eighteen. He’s a defensive defenseman and is excellent for staying home and shutting down the opposition, just needs a bit more speed.

Jonah Jelley was taken by the Islanders in the 8th round of the 2020 Q Draft at pick 142. Jelley plays on the left-wing for the Charlottetown Knights U18 AAA squad of the NBPEIMU18HL. Jonah has been impressive putting up nineteen goals and twelve assists for 31 points in eighteen bouts during his second campaign with the Knights. The Isles prospect is also head of the league in scoring. Jelley did make his QMJHL debut this season being brought up for an away game in Halifax just before the break where he went +1.

Trevor Birt: Jonah is having a great season, he currently leads the Knights and league in scoring. Jelley battles hard and works hard on and off the ice. He could make it on the squad as an eighteen-year-old if he continues to build on his skating training, with his scoring touch will definitely be pushing for a roster spot in 2022.

Another Island-born, Vos is a right-side defenseman so his positioning favors his shot. He was taken in the 14th round of the 2020 QMJHL Draft as pick 250. Isaac is currently a member of the Charlottetown Knights U18 AAA squad of the NBPEIMU18HL, to this point, Vos has recorded three goals and eighteen assists in eighteen outings this season.

Trevor Birt: Isaac had a strong training camp at both age sixteen and seventeen. The Islanders have a strong defensive corps already and Vos just fell victim of the numbers game. He’s strong with his skill development and could be with the Isles next season.