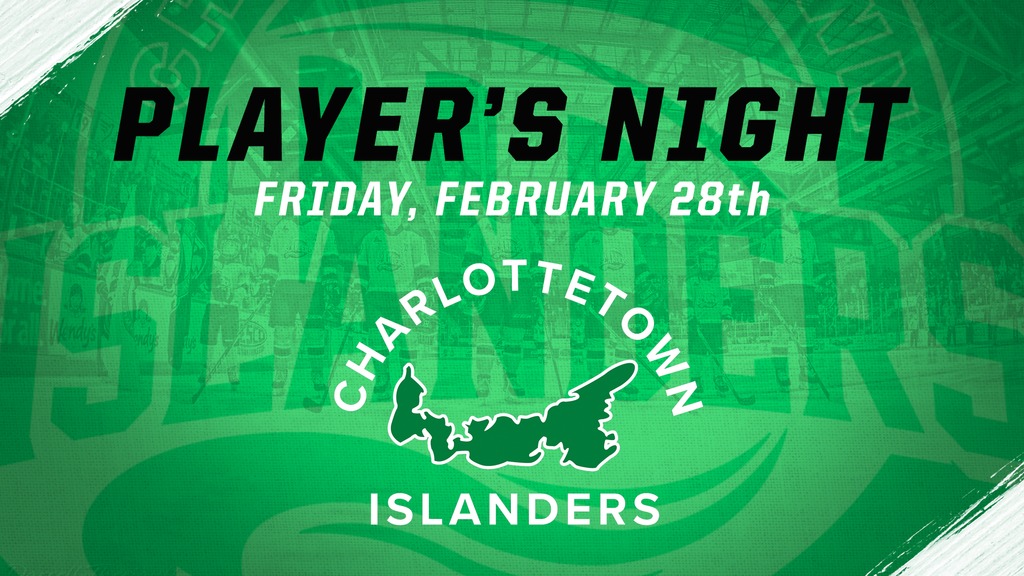 On Friday, February 28th, the Charlottetown Islanders players make their mark in a fun, unique way.

The Islanders are pleased to announce that game against the Cape Breton Eagles will be entitled Player’s Night, complete with special-edition jerseys, but with a twist.

“We do our best to recognize numerous groups, organizations, and causes throughout our regular season; at the end of the day, our success in doing that is due to the players on the ice,” said Islanders president of operations Craig Foster. “Player’s Night gives us the opportunity to flip the script and let the personality of our players shine through.”

The Islanders players worked together to design a jersey that they wanted to wear. The theme they chose was simple: honour the history of hockey on Prince Edward Island.

“The crest on the front of the jersey is an homage to the Armour Fence Islanders, the only Prince Edward Island team to ever capture the Allan Cup, Canada’s national senior men’s hockey championship.” explained Islanders equipment manager Andrew ‘Spider’ MacNeill. ” The numbering on the back of the jersey is a modern update to the numbering on the original PEI Rocket jerseys.”

“Finally, the Kelly Green colour of the jersey is in line with the same colour of our provincial sports teams. The hope is that this jersey doesn’t just connect our players with those who laid the groundwork for them, but connect us with all Islanders.”

The final unique touch on the jersey is arguably the most unique – rather than traditional last names, each players’ jersey will have their nickname emblazoned across their back, an idea inspired by Major League Baseball’s Player’s Weekend.

“We’re all proud to be members of this organization, so to have a Player’s Night where we have jerseys with our nicknames on the back is pretty exciting,” said goaltender Matthew Welsh. “Being here for five years I’ve seen how close-knit our fans get with this club. To be able to represent some of the history associated with this team is a great honour.”

Player’s Night Jerseys will be available via an online auction and a silent auction, along with an in-arena raffle. Tickets for Player’s Night can be purchased at the Eastlink Centre box office, by phone at 902-629-6625, or online at https://boxoffice.eastlinkcentrepei.com