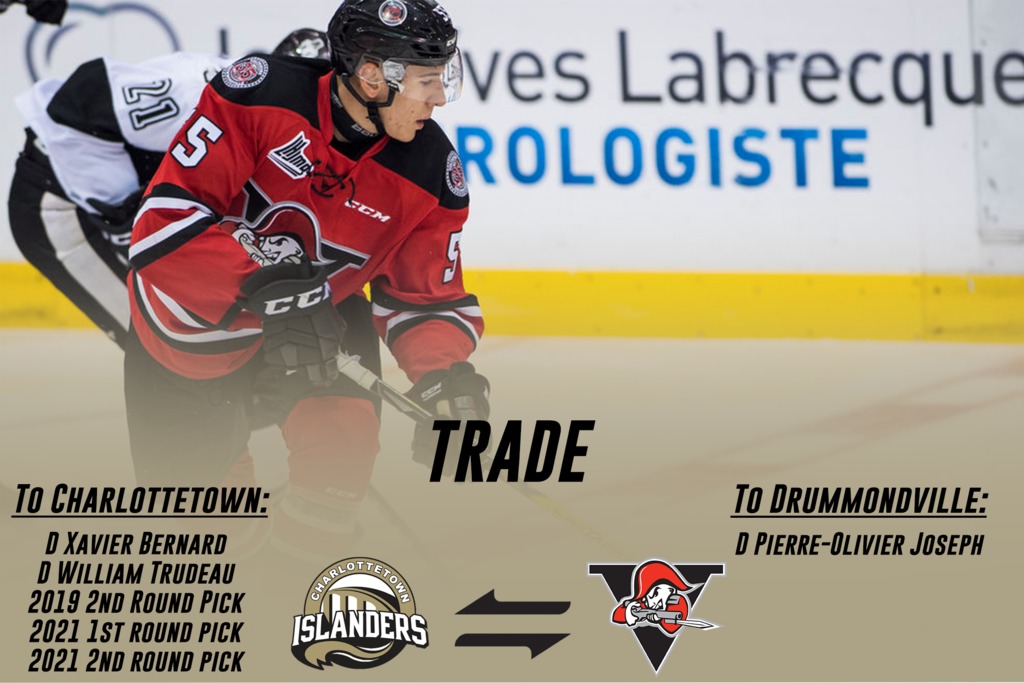 The Charlottetown Islanders weren’t finished wheeling and dealing during the Christmas trading period, making one of the biggest splashes to date this holiday trading period.

Just days after trading long-time Islander Keith Getson to Halifax, the Isles sent captain Pierre-Olivier Joseph to the Drummondville Voltigeurs in exchange for defenseman Xavier Bernard, prospect William Trudeau, a 2019 2nd round pick, a 2021 1st round pick, and a 2021 2nd round pick.

Joseph, a first-round pick of the Arizona Coyotes in 2017, has scored 7 goals this season to go along with 18 assists for 25 points in 27 games this season. He was also named captain of Team QMJHL at the most recent 2018 CIBC Canada-Russia Series.

Joseph’s final game as an Islander was his 200th in the QMJHL, all with Charlottetown. In that time, he’s scored 27 goals and 118 points, the most among defenders in the six-year history of the Islanders.

“Everything that was said about Getson can be said about PO.” said Girouard. “He is an amazing person that will have success wherever he is.”

Replacing Joseph’s presence in the lineup immediately is 6’3 defender Xavier Bernard. A 4th round pick of the New Jersey Devils in the 2018 NHL Draft, Bernard has scored five goals and 11 assists for 16 points in 32 games so far this season.

Throughout his three-year QMJHL career, the 18 year-old Bernard has scored 17 goals and 57 points in 153 QMJHL games.

“We got a player in our staff likes a lot in Xavier Bernard.” said Girouard. “He is a big-bodied 4th round NHL pick that will have an immediate impact.”

William Trudeau is a defensive prospect currently playing for the Saint-Hyacinthe Gaulois of the QMAAA. An 11th round pick of the Volts in the 2018 QMJHL Draft, the 16 year-old has scored 3 goals and 11 assists in 30 games this season.

“William Trudeau is a player our scouts feel will be ready for the league next year.” added Girouard regarding the Isles’ newest prospect.

With three high draft picks over the next three seasons, the Isles are able to restock the cupboards that were left relatively bare after the team geared up for a President’s Cup run in the 2016-2017 season.

“We knew two years ago that we would have to move some pieces to recover some draft picks.” explained Girouard. “We were able to replenish our draft picks and put ourselves in a position to establish some continuity in years to come.”

Bernard will join fellow incoming acquisitions Noah Laaouan and Jordan Maher in the lineup this Friday, December 28th, when the Islanders take on the Halifax Mooseheads at 7:30pm at the Eastlink Centre. Tickets are on sale at the Eastlink Centre box office, by phone at 902-629-6625, or online at https://boxoffice.eastlinkcentrepei.com. Don’t forget that you can get 2 adult/senior tickets and 2 student/youth tickets for just $40!