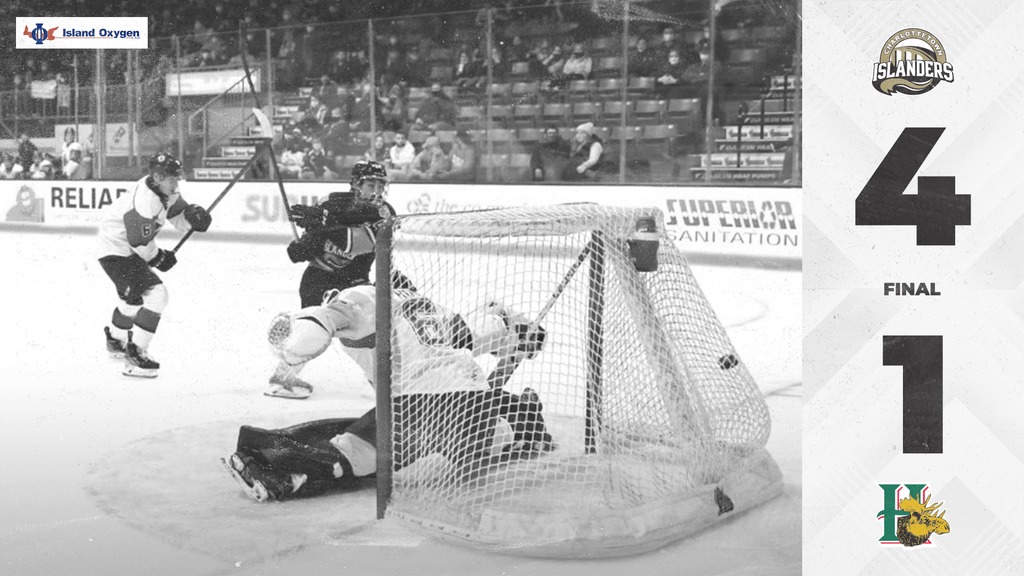 The Islanders are giving fans hockey games to cheer about as they got off to a hot 2-0 start to this young season. Back at the Eastlink Centre now to start off a busy holiday weekend, the Islanders looked to keep the momentum going as they entered their part of the home-at-home series against Maritime foe, the Halifax Mooseheads.

The first period delivered us a heartwarming welcome back as Zachary Beauregard suited up tonight for the Mooseheads, marking his first game back at the Eastlink Centre since being traded this offseason. Beauregard played 182 games in the black and harvest gold uniform spanning over 3 seasons. Zach began his QMJHL career with the Islanders back in 2018 and accumulated 65 points in Charlottetown.

The Islanders and Mooseheads both came out of the gates strong, showing to be a well-matched bout to kick off the weekend. A little over halfway through the first frame is when the Islanders were able to break the ice as Patrick Guay tipped one through traffic and past Rousseau. Assists went to Xavier Simoneau and Patrick LeBlanc. Elliot Desnoyers made an impact in his return to the Mooseheads lineup. Desnoyers found himself a breakaway late in the first, after being stopped on the initial shot by Satny, Elliot was able to jam his rebound through his pad to tie it up. Jordan Dumais picked up the helper.

Shots through the first period finished tied at 10.

Brett Budgell kept his hot start rolling tonight as the captain lasered one over the shoulder of Rousseau late in the second to break the tie. Ryan Maynard and Michael Horth were the set-up men. Moments later Isles star defensemen Lukas Cormier netted his first of the season on a redirect in front from Xavier Simoneau and Noah Laaouan.

Noah Laaouan also delivered a big second period firing his boys up with a heavy-hitting tilt against Elliot Desnoyers after crushing one of Desnoyers teammates at center ice.

Shots after the second frame tallied at 18-13 for Charlottetown.

Drew Elliott stood as the lone goal scorer in the final frame. Elliott buried a beautiful pass from Jakub Brabenec who set him up for the one-timer saucing it over a Moosehead defender’s stick. Brett Budgell was also credited with helping Brabenec set up Elliott.

Oliver Satny settled in nicely to earn a win in his Islanders debut, stopping 16 of 17 shots. Noah Laaouan and Ben Boyd also delivered heavy-hitting performances for the team, each having numerous big hits to set the game tone.

1st star of the game went to Xavier Simoneau as he recorded 2 assists. 2nd star was Jakub Brabenec for his amazing set-up on the Elliott goal. Finally, 3rd star was given to Noah Laaouan for his physicality during the game and also notching an assist.