It took some overtime magic but the Islanders pulled out their first win of the season.

The Islanders rolled into Saint John, New Brunswick on Thursday coming off of two tough losses
to start their season.

The team came out of the gates with a sense of urgency and took ownership of the game early on. Former Saint John Sea Dogs forward Adam Marsh opened the scoring for the Islanders on the power play three minutes in. Marsh found himself alone in front Saint John goaltender Alex D’Orio before deflecting home a point shot from defenceman Saku Vesterinen.

The Isles had several more scoring chances but entered the first intermission with a one-goal lead.

The Isles came out with an even greater intensity in the second period, with forwards Nikita Alexandrov and Keith Getson dominating their opponents in the offensive zone. After 40 minutes of play, the Isles were unable to add to their lead, despite outshooting their opponents 32-9.

The third period was wide-open, with both teams trading prime scoring chances for much of the period. Islanders starter Matthew Welsh 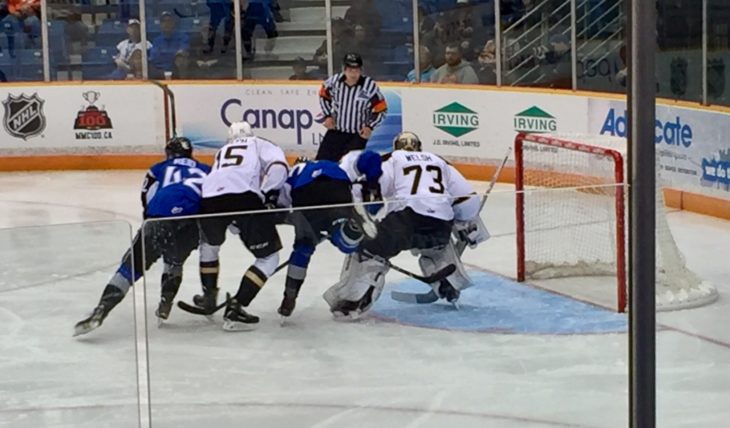 was huge for the Isles early in the period, stopping several quality shots after having very little work through two periods. With just under six minutes remaining in the period Saint John forward Joe Veleno capitalized on a turnover and slide one by Welsh to tie the game.

With the game tied at the end of regulation, the teams were headed for overtime.

In the 3-on-3 format of overtime, the teams traded chances and following a failed odd-man rush for the Sea Dogs, the Isles went the other way.  After Sam King’s stick snapped mid-shot the puck knuckled towards D’Orio, and Keith Getson took advantage batting a loose puck over the sprawled out goaltender to win the game.

The Islanders threw everything they had at Saint John Sea Dogs goaltender Alex D’Orio to the tune of 48 shots, only managing the get two passed the second year net-minder.

D’Orio received first-star of the game honors for his efforts, with Islanders Adam Marsh and Matthew Welsh receiving the second and third stars respectively.

With the Isles now in the win column, they continue their road trip with stops in Moncton on Saturday at 7 p.m. and Halifax on Sunday at 3 p.m.