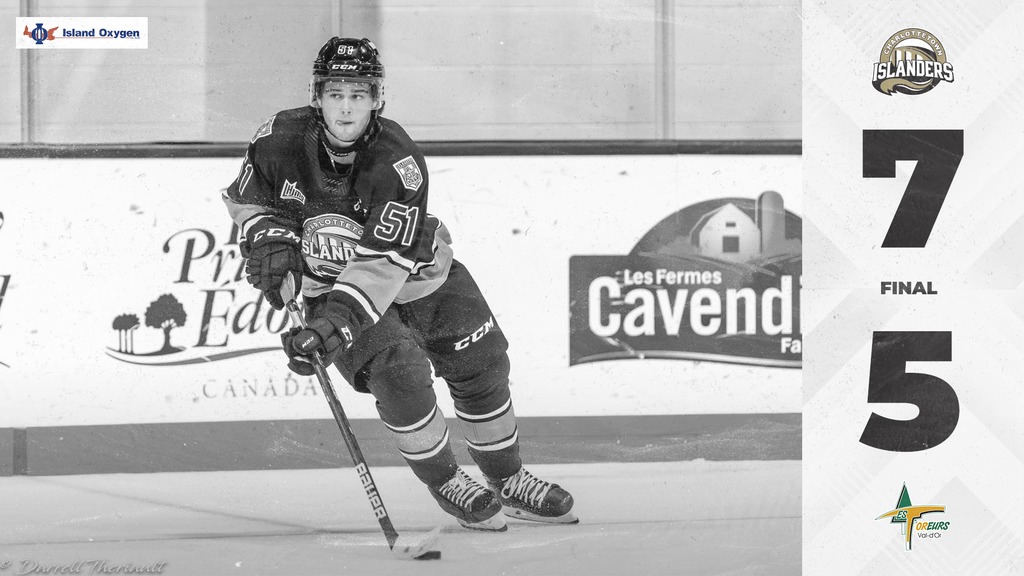 What a treat the last few games have been, when you score 14 goals in two games how can you not be pleased. There is breaking out of a slump, then there is breaking out of a slump in style and the Islanders have been on the runway the last 120 minutes of action. Now, the Val-d’Or Foreurs came to town this afternoon in an effort to play spoiler on a fantastic week for Charlottetown. With the Islanders now firing on all cylinders, they were planning on sending the Foreurs on a long and bitter bus ride back to Quebec.

It didn’t take long for the Isles to gain an offensive advantage when Foreurs Alexandre Doucet received a tripping minor just over a minute into the first. Patrick Guay stayed hot when he lasered one past Cloutier just over a minute into the powerplay to put the Isles ahead 1-0. Assists on the powerplay goal went to Lukas Cormier and Xavier Simoneau. Once again the Islanders found themselves on the advantage just before the halfway mark of the opening frame. It was Brett Budgell this time redirecting a Simoneau shot to sneak its way into the back of the net. Budgell’s 5th of the season put the Islanders ahead 2-0 early, assists going to Simoneau and Lukas Cormier on the play.

At 14:34 into the opening frame, it was the Foreurs this time prevailing on a Sam Bowness penalty, Alexandre Doucet was able to bury one on Goobie to bring the score to 2-1. Assists went to Justin Robidas and Jeremy Michel.

The last two minutes of the opening frame were jam-packed with Islanders offensive attacks. A Lukas Cormier wrister found the back of the net with just over a minute to play giving him his 6th of the year. Brett Budgell recorded the helper here. Exactly 30 seconds later is when Sam Oliver found the board to boost the Isles lead up to 4-1 going into the second frame. Ben Boyd assisting on the play.

Shots after the first were in the Isles favor 14-5.

The second period is when the Foreurs woke up and decided to fight back. At 3:32 into the second Jeremy Ste-Marie was able to beat Goobie and cut the lead down to 4-2. Nathan Bolduc and Jason Desruisseaux recorded the assists. Then, at 8:30 into the period, Jeremy Michel was able to tip one just past Goobie to bring Val-d’Or to within one. Helper went to Alexandre Doucet. Finally, for the Foreurs in the second, Jason Desruisseaux was able to keep his stick just below the cross-bar and deflect the puck past Goobie to tie the game at 16:25 into the second. Assisting on the goal were William Provost and Mavrick Gauthier.

Patrick Guay wasn’t going to let the Isles go into the final frame without the lead however, as he launched his second of the game home past Cloutier with 28 seconds left to give the Islanders a 5-4 lead through two. Assisting on the Guay goal was Keiran Gallant.

As was the story last night Lukas Cormier wasn’t going to let Patrick Guay be the only one with a multi-goal game when he delivered a clutch laser-beam from the point with just over ten to play putting the Isles ahead 6-4. Assisting on the game-winner were Noah Laaouan and Jakub Brabenec.

With just over a minute left in the game, Alexandre Doucet was able to keep the Foreurs hopes alive beating Goobie high on the glove side to make the score 6-5. Assists on the goal went to Jeremy Michel and Kale McCallum. The final tally on the score sheet went to Xavier Simoneau as he netted one on the empty net with 1.8 left on the clock to seal an Isles victory 7-5. Brett Budgell and Noah Laaouan were the helping hands.

The win this afternoon wraps up a successful week for the Islanders as they outscored opponents 21-8 over the last three games. The Islanders are in action next Thursday night when the Gatineau Olympiques come to Charlottetown for a 7 pm puck drop. It’s also student night on Thursday so make sure you take a break from studying to come out and support your Charlottetown Islanders.