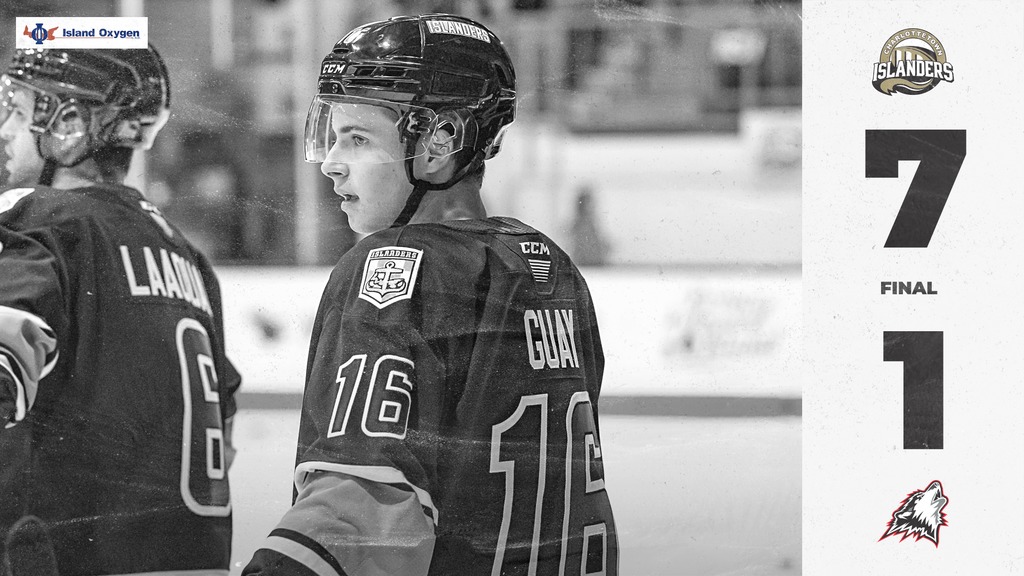 The Islanders finally broke out of the 4-game skid in dramatic fashion when they found the back of the net 7 times over in Cape Breton. Keep in mind as well that the Isles were minus captain Brett Budgell and star forward Xavier Simoneau when they entered the nest. Now, back home in Charlottetown with players’ families in attendance, the boys dawning the black and harvest gold were looking to put on a show Saturday night. With the Rouyn-Noranda Huskies coming off a slump buster as well and making their first appearance on the Island in over two years, fans were set for a rink rocker this evening.

The first period took some time for both teams to find their footing in this one, being a lot of neutral zone action early on. It was just past the fifteen-minute mark in the first when a scoreless tie finally broke. Leighton Carruthers was able to get a foot ahead of Islanders defense to free up his stick and surprise Oliver Satny with a five-hole squeaker. Samuel Johnson and Samuel Regis were credited with the assists.

It only took thirty seconds for an Isles response when Ben Boyd broke in on a 2-on-1 and decided to keep the puck and send one on net himself. Boyd sniped a low one cross-crease on Dorcal-Madore to beat him just below the glove. Drew Elliott and William Trudeau had the helpers on the game-tying goal.

Shots were in the Islanders favor 10-7 through the first 20 minutes of play.

The boys came out all fired up to start the second period as it only took 46 seconds to find the back of the net. Lukas Cormier took advantage of some heavy traffic in front of Huskies tendy Dorcal-Madore and sent a clapper perfectly through the crowd of bodies and into the back of the net. With this goal, Cormier now has his total up to four on the year. Helping hands went to Brett Budgell and Noah Laaouan on the play.

At 4:10 into the frame, Sam Oliver pushed the Isles out in front 3-1. Oliver took a one-timer feed from Noah Laaouan in tight to launch one right over the shoulder of Dorcal-Madore. William Trudeau also picked up an assist on the play.

Through 40 minutes of play at the Eastlink Centre, the Isles held a commanding 23-9 lead in shots.

Just two and a half minutes into the final frame is when Patrick Guay and Xavier Simoneau got creative on the penalty kill. Simoneau sprung Guay on the break before joining him for a 2-on-1, Guay decided to hold the puck and go at the Huskies tendy himself. Guay cleaned up his own rebound to slide one in on the penalty kill and extend the lead to 4-1. Simoneau was credited with the assist. At 9:11 into the third Guay decided he wasn’t done, number 16 did a full loop in the Huskies zone before lasering one cross-ice to beat Dorcal-Madore for his second of the night. Helper went to Matis Ouellet and thus put the Islanders up 5-1.

Cormier wasn’t going to let Guay sit as the only one with a multi-goal game. Cormier faked a clapper to psych out the Huskies defense and just toss one towards the net, Dorcal-Madore couldn’t even see it coming as it was in the back of the net before he even moved. Sam Oliver and Michael Horth picked up the assists on the 6th Isles goal.

After missing the past three games due to an upper-body injury Xavier Simoneau made his way back into the Isles starting line tonight. Simoneau wanted to give his family a good show as he netted one in his return with just under 2 to play and send Isles fans home happy and seal a 7-1 victory on Saturday night.

Your Charlottetown Islanders take the ice again tomorrow afternoon when the Val-d’Or Foreurs make their way to the Eastlink Centre for a 3 pm puck drop. Islanders fans are encouraged to come help the boys protect the bridge, tickets are available at the Eastlink Centre Box Office in person (Monday to Friday 11 am to 5 pm), online, or by phone at 902.629.6625.