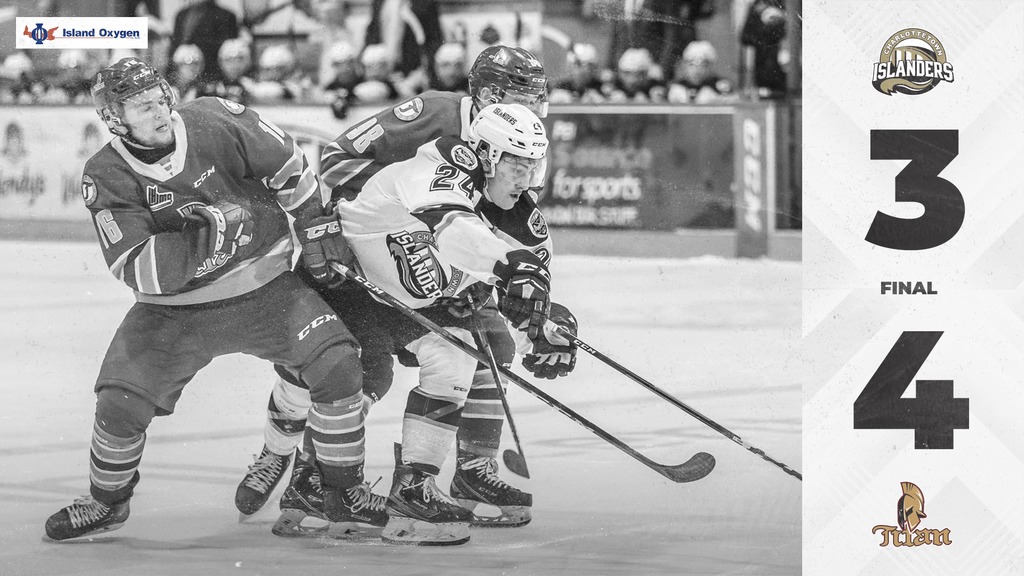 After beginning the season 3-0, the Isles hit a rocky slide all of a sudden losing three straight to go to 3-3. In this three-game skid, the Islanders were shut out twice and held to 1 goal through 9 periods of play. Now, entering the home of the Acadie-Bathurst Titan, the Isles look to be more hungry than ever to get back into the win column. Jim Hulton has his work cut out for him to try and figure out the correct formula to the ongoing line juggle. With the Titan being handed their first loss of the season yesterday night by Moncton via shootout, the Isles look to find the back of the net again to make it two losses for the Acadie-Bathurst Titan.

Brett Budgell seemed to hear Hulton’s plead for new life as he was an aggressive force in period 1 to get under the Titan’s skin. The Isles looked more lively going into this one, however, it was still the Titan who managed to find the board first. Jaxon Bellamy tossed a puck on net through traffic that was able to trickle its way behind Goobie to put the Titan up 1-0. Cole Huckins and Logan Chisholm recorded the assists on the play.

Bellamy’s tally stood as the lone goal in the first frame as the Islanders held the lead in shots 13-10 after 20 minutes of play.

Early in the second period, it was Joseph Henneberry this time for the Titan who was able to get the best of Jacob Goobie finding the back of the net to go up 2-0. Jaxon Bellamy recorded his second point of the night assisting on this one.

Just before the halfway point of the second frame is when the Lukas Cormier show began. Cormier fired one past Bednar from the point to get the Isles on the board for the first time in five periods. William Trudeau and Jakub Brabenec were the helping hands on this one. It only took another three minutes before Michael Horth added his second goal of the season. Horth took advantage of a bad Titan turnover to launch one blocker side past Jan Bednar, the goal was unassisted. Riley Kidney wasn’t going to let the game remain tied for long as he beat Goobie during a 5-on-3 powerplay to reclaim the lead 3-2 before the end of the second frame.

Shots remained in the Islanders favor 24-23 after two periods of play.

Cormier kept his strong performance going very quickly in the third as he got the best of Bednar just one minute into the final frame. Noah Laaouan and Cormier prove to be a good match as the first D-pairing as Laaouan was the set-up man on the goal. Cormier’s strong performance in this one earned him the third star of the game.

Cole Huckins was able to send one cross-ice and beat Goobie glove-high just before the halfway mark of the third to take back the lead once again and the Titan were up 4-3. This stood as the final tally in this one as the Isles have now dropped 4 straight.

Final Shots were in favor of Charlottetown 42-35 in this one.

Charlottetown was able to solve its offensive rut situation netting three gals on Jan Bednar, unfortunately, this was one to few to keep the game alive as the Isles still search for that win column. The Islanders are back in action Wednesday night when they travel to Cape Breton to face the Eagles. Puck drop is set for 7 pm.