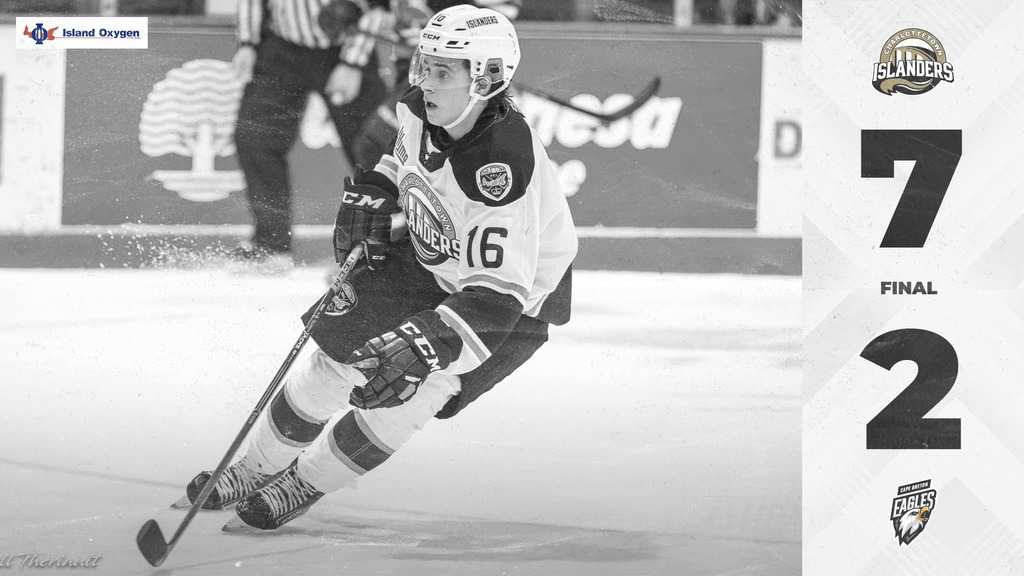 A fire warning is now in strong effect. It can now be said with absolute confidence that Jim Hulton is beginning to find the chemistry in his line-up. After struggling to score in three of the last four games the Islanders were that their three-goal performance against the Titan would get the ball rolling. Boy has the ball ever started rolling. Even without top-end guys Brett Budgell and Xavier Simoneau in the Wednesday night bout for the Islanders, the Cape Breton Eagles were in-store for a long, long game.

It took only 2 minutes for the Islanders to find the back of the net in this one. Patrick LeBlanc got down on one knee during an Isles early powerplay to launch one past Delafontaine in tight on the short side. Assists on the goal went to Lukas Cormier and Noah Laaouan. Fun fact to remember here, the Islanders are undefeated thus far when scoring first.

Shortly before the 10-minute mark in the first is when Drew Elliott was able to tally his second goal on the year, Elliott beat Delafontaine jamming away at the net to put the Isles up 2-0. Keiran Gallant picked up the assist on this one. With just a little over one minute left to play in the first is when it appeared as though Sam Oliver found the back of the net, however, it was later determined that it was Michael Horth who made the tip. Horth’s goal put the Isles up 3-0 and was also his 3rd on the season. Lukas Cormier recorded the helper as this stood to be the game-winning goal.

Shots were tied at 9 through 20 minutes.

Sam Oliver wasn’t going to let his name stay off the score sheet for long though as he tipped one right past Delafontaine at 7:32 into the second frame. It was a Noah Laaouan shot that was tipped and William Trudeau also grabbed a helper on this one. The Isles weren’t done rolling there as next it was Ben Boyd to strike the board and put the Islanders up 5-0. Boyd launched one past Delafontaine glove-side to tally his second of the season. Assists went to Ryan Maynard and Matis Ouellet. Patrick Guay joined the party just 22 seconds later when he sniped one past Delafontaine to put the Islanders up 6-0 through 40 minutes of play.

It was Patrick Guay who kept the show going in the third. Guay netted one of the nicest goals on the night when he went spinning and threw one on net through traffic and managed to beat Delafontaine while falling on his rear. This extended the Isles lead to 7-0 and capped off their impressive offensive outburst.

The Eagles weren’t going to go down without a little wing flap tonight. It was Ivan Ivan for the Eagles who was able to break in and break up Jacob Goobie’s shutout. Assists went to Dawson Stairs and Jeremy Langlois. There was also a sweet moment despite the blowout for the Eagles as Cam Squires was able to net his first career QMJHL goal to take the score up to 7-2. Assisting on the goal was Cam’s brother Jacob Squires. A nice moment from the PEI-born brothers.

Shots wrapped up in favor of the Islanders in the lop-sided victory 37-23.

The win tonight breaks a 4-game skid for the Islanders as they get back to playing .500 hockey. It seems after tonight their scoring troubles have come to an end as it was a free for all scoresheet tonight. As well, Brett Budgell and Xavier Simoneau are hopeful to return to the line-up this weekend.

Three Stars of the game:

The Islanders are back in action Saturday night when the Rouyn-Noranda Huskies make their way to the Eastlink Centre for a 7 pm puck drop. Tickets are available at the Eastlink Centre Box Office in person (Monday to Friday 11 am to 5 pm), online, or by phone at 902.629.6625. It’s also cyber Saturday so be on the lookout for that promo code that will be posted on the Isles social media accounts.