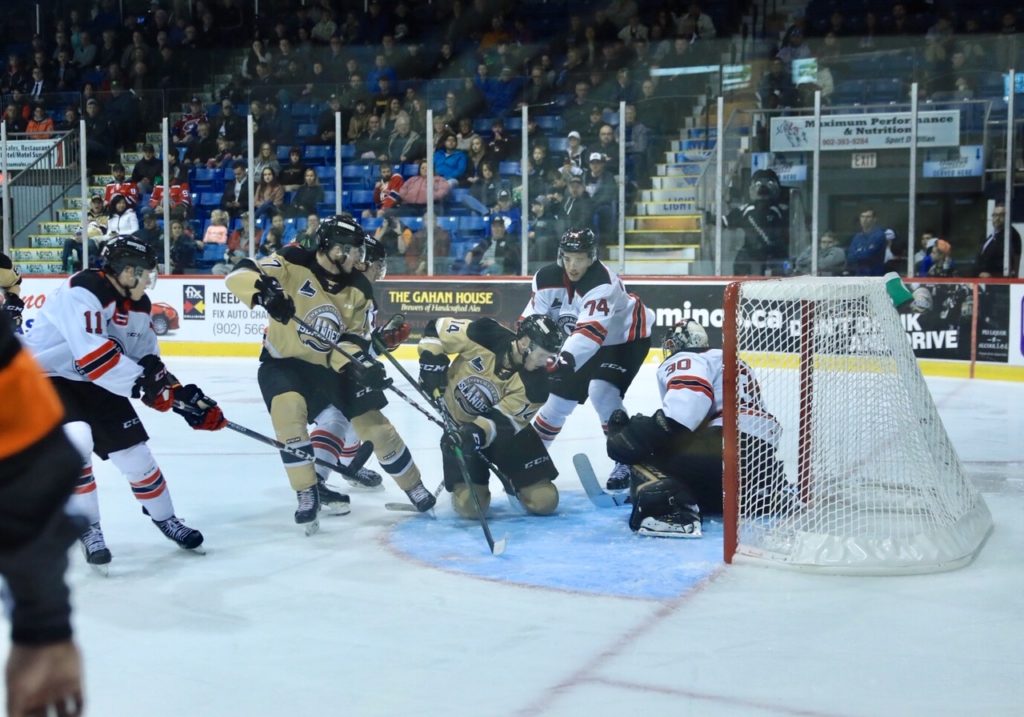 The Charlottetown Islanders got their first hard lesson of the season.

The Isles held a 4-1 lead entering the third period, but the Quebec Remparts scored three unanswered goals before Anthony Gagnon ended it in overtime, giving the Remparts the 5-4 overtime victory.

“Never the way you want to lose, giving up a 4-1 lead on home ice, but we lost the momentum right off the opening faceoff in the third period, and this game is all about momentum.” said Islanders head coach Jim Hulton.

The Isles pushed the pace in the first period and gained the aforementioned momentum early on. Kevin Gursoy, who broke out of a scoring slump just last night, wired a wrister on the powerplay past 16-year old netminder Emerik Despatie for his second goal in as many games.

The Remparts would respond with a tally of their own, and it was another 16-year old tying it up. James Malatesta finished off a pretty passing play in the offensive zone to give him his fourth goal of the season, leading the Remparts in that category.

The tie wouldn’t last long, and it would be Cole Edwards getting on the board. The Kingston, Ontario native would respond with his fourth of the season just over a minute later, finding an Xavier Fortin rebound and going bar-down on Despatie.

The Islanders would turn it on in the second period and expand the lead. Gursoy would add his second of the game late in the second followed shortly thereafter by Lukas Cormier, who broke out of his own scoreless drought to extend the Isles lead to three before the end of the 2nd.

The third period is where the wheels fell off for the Isles. Gagnon would record his first goal of the game early in the third before Edouard St-Laurent added another quick tally on a 4-on-4 situation. The momentum quickly began swinging in favour of the Remparts.

The Remparts would complete the comeback late in the third with their net empty. It was Malatesta again, receiving the pass off the faceoff and snapping a quick, accurate shot that beat Jacob Goobie high for his fifth of the season.

The Islanders had the best opportunity of the overtime period with Nikita Alexandrov. The St. Louis Blues draft pick got hauled down on a breakaway and was awarded a penalty shot. Unfortunately, a great read by Despatie and a quick poke check put an end to that opportunity.

The Remparts would win it though just minutes later, and it would be Gagnon once again, out-muscling Xaiver Bernard in front to tap the puck in to an open net for the extra win.

The Isles will look to rebound on Sunday afternoon when they take on the Acadie-Bathurst Titan on the road. Puck drop goes at 3:00pm!