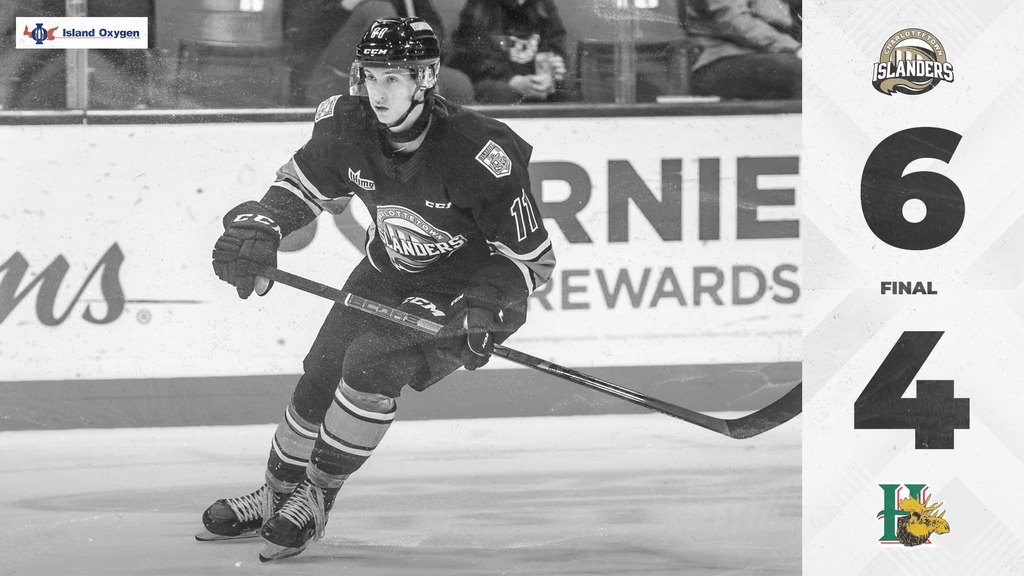 When you come out of Quebec with four points and keep the good times rolling when you enter the home of a Maritime foe and leave with a comfortable win, hockey life seems pretty good. This afternoon the Islanders had to be feeling happy going into the final leg of a lengthy five-game road trip after already collecting six out of a possible eight points. Although it wasn’t going to be any simple task to take the road trip finale as they entered the Scotiabank Centre to face a hot Mooseheads hockey club. With Jacob Goobie getting the start between the pipes in his hometown, there was plenty of spotlights on both sides setting us up for some fun Sunday matinee action.

To open this one up it was a hot redirect from Markus Vidicek off a Bobby Orr shot that went top corner over the blocker shoulder of Jacob Goobie just over five minutes into the game. Assisting on the Moose’s first goal of the game were Bobby Orr and Brady Schultz. It only took the Isles 1:29 to respond when the captain sent a nice cross-ice feed to Patrick Guay where he was able to beat Rousseau under the blocker arm on the powerplay to even this one up. Helpers went to Brett Budgell and Lukas Cormier. Charlottetown found themselves on the man advantage once again at 12:12 into the frame and it was the hot stick of Guay coming up clutch for his second of the afternoon. The Isles pulled off a tic-tac-toe play that eventually saw Simoneau send one across to Patrick Guay where he lasered one past a scrambling Rousseau this time glove-side on the powerplay. Xavier Simoneau and Jakub Brabenec were credited with the assists on this one. The Mooseheads weren’t going to go into the intermission down however as they pulled off a little dance with the puck before Bobby Orr was able to send one past Goobie blocker side. Assisting on the goal were Elliot Desnoyers and Jordan Dumais.

Shots through one favored the Mooseheads 7-4.

Scoring opened up in the second frame when Elliot Desnoyers found himself sitting all alone in front of the net when the puck came to him, Desnoyers snuck it past Goobie to take the lead early in the second for the Mooseheads. Jordan Dumais and Brady Schultz were the helping hands on this one. Bobby Orr was also able to beat Goobie later on in the second however, the call was reversed due to an offside and it kept the Moose up just 3-2. The Isles knew they had to take advantage of the call and who better than the captain himself to fire the boys up. Brett Budgell skated in tight, absolutely undressing a Mooseheads defenseman before sniping one just under the bar on Rousseau. The game-tying goal was assisted by Xavier Simoneau. Then, in the final minutes of the frame, Oscar Plandowski wristed one on the net that caught Rousseau off guard and sliding away from the puck. Plandowski’s shot beat Rousseau top cheese on the glove side.

Shots heading into the final frame favored the Isles 19-8.

The third period began with intensity, with the game being so close going into the final frame you can be sure that both coaches were firing the boys up for a big finish. The Mooseheads were the first team to crack the scoresheet in the final frame when Zack Jones was able to find Goobie’s five-hole on a wrap-around to tie the game up. The goal came at 13:24 into the third and was unassisted. Just over a minute and a half later is when the Islanders found themselves on the powerplay once again after a David Lafrance delay of game call. With the Isles powerplay being so hot it was only a matter of time before they struck again, this time, it was Jakub Brabenec. Brabenec took a feed from Guay right in the slot and blasted one right past Rousseau to put Charlottetown right back in the lead. Patrick Guay was the lone assist.

With just over a minute left to play in the third, the Isles took possession of the puck and forced Rousseau to stay in his crease. Unfortunately for Rousseau, the Islanders didn’t need the empty net to add on some insurance. Some passing behind the net between Guay and Simoneau led to Guay sending one right across the crease to Sam Oliver where he was waiting to bury it home. Oliver’s sixth of the year was enough to seal a 6-4 Charlottetown victory. Assists went to Guay and Simoneau.

A massive game from Patrick Guay and an eleven save win for Goobie powered the Isles to victory and capped off this five-game road trip with them taking eight of a possible ten points. Islanders fans finally get to flood back into the Eastlink Centre this Thursday night when the Moncton Wildcats make their way to P.E.I for student night in the Islanders home barn.