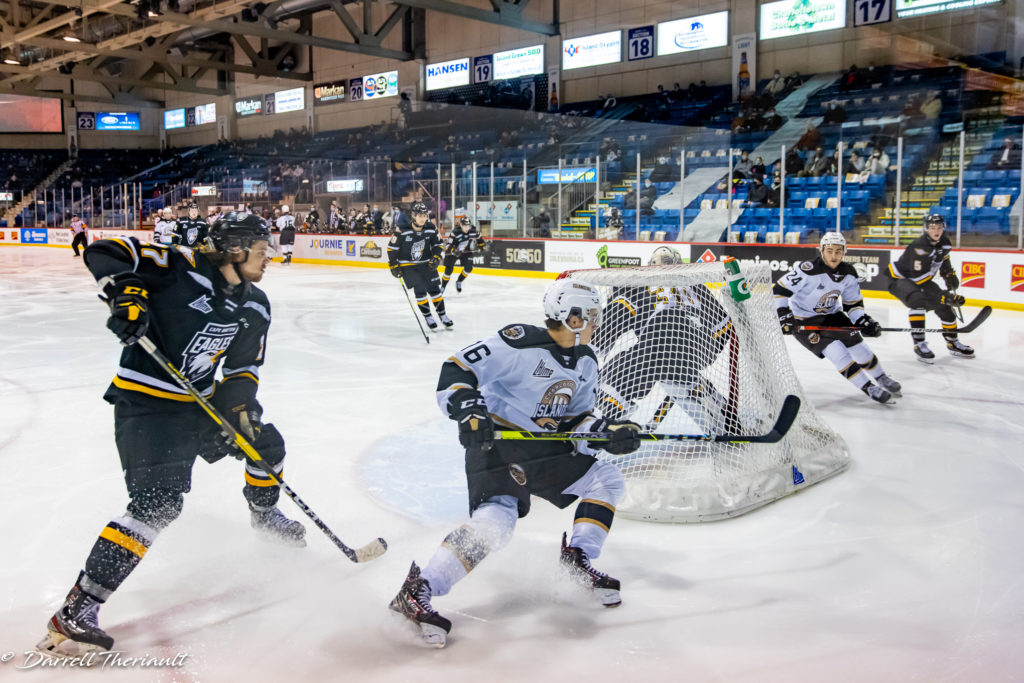 It’s been another long, productive week of practice for the Charlottetown Islanders in preparation for a weekend in Nova Scotia, beginning with this afternoon’s game against the Cape Breton Eagles in Sydney, Nova Scotia.

The Islanders (20-4-0-0) became the first team in the QMJHL to crack 20 wins on the season. Now in the midst of a five-game win streak, the Isles are coming off an emphatic 8-2 victory over the Eagles in the team’s last matchup propelled by another dominant performance from the top line of Cedric Desruisseaux, Brett Budgell, and Thomas Casey. The trio combined for ten points in the victory en route to all three being named to the QMJHL’s Team of the Week alongside teammate Lukas Cormier.

While the top line was a key source of the offense, it wasn’t the only source; Brendan McCarthy picked up two goals after serving as a healthy scratch multiple times throughout the past few weeks. It was an added morale boost on an already positive night for McCarthy, who is highly regarded among his peers in the locker room.

“It’s great to see a guy like Brendan get rewarded because he’s a glue guy in the room,” said Jim Hulton on McCarthy following Saturday’s game. “He’s really well-respected and well-liked in the locker room. Kudos to him for showing the character to be healthy scratched for a few games and come back and make a contribution like that.”

Meanwhile Colten Ellis is projected to get the nod between the pipes as he looks to continue his torrid season. Leading the league in almost every statistical category for a netminder, Ellis is quickly establishing himself as the frontrunner for the QMJHL’s Goaltender of the Year.

The Eagles (11-14-1-0) meanwhile are hoping to get some reprieve in the injury department. The team has been dealing with a number of injuries and have had multiple players called up to the lineup accordingly. Despite that, they’ve held their own against Halifax this past week, going 1-1-1-0 in a three-game mini-series this past week.

Any of our five viewing partners across Charlottetown will continue to carry the games – The Factory Downtown, Boston Pizza, the PEI Brewing Company, Outrider’s Cookhouse, and Dooly’s. Cory Arsenault and George Matthews will have the call across the airwaves on Ocean 100’s Saturday Night Hockey!

Schedule update for the Maritimes Division
9 hours ago