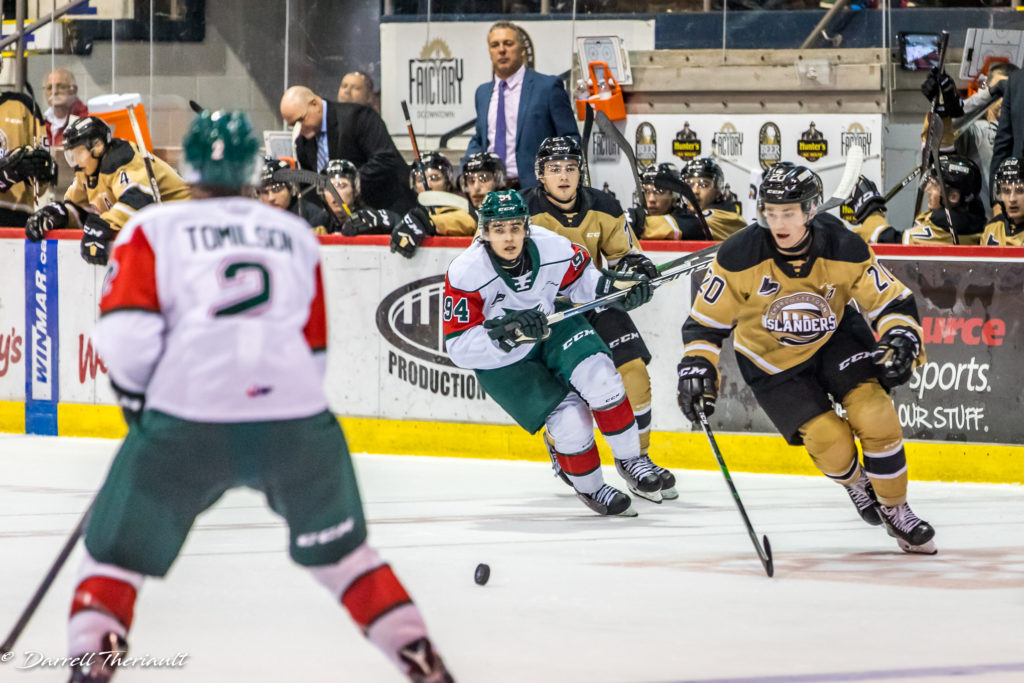 After an emotional victory on Friday, the Charlottetown Islanders head in to battle on Sunday afternoon against the Halifax Mooseheads in the annual Teddy Bear Toss Game.

The Islanders (15-10-4-0) pulled out a gutsy 4-3 victory in overtime against the Val d’Or Foreurs in the Hockey Fights Cancer game. Thomas Casey recorded his first career hat trick while Xavier Fortin set a new career high in points with his sixth goal of the season.Casey’s hat trick gives him five points in his past three games. The victory snapped a three-game losing streak for Charlottetown.

Charlottetown will look to replicate their success against the Moose from earlier this season, where they defeated Halifax twice in the month of September. Their last meeting didn’t yield the same success; Alexis Gravel stood on his head to make 49 saves and the Mooseheads took a 4-1 victory at the Eastlink Centre.

The Mooseheads (13-11-2-1), to their credit, are coming off a 3-0 victory over the Blainville-Boisbriand Armada and are trying to start a winning streak of their own, having lost four in a row earlier this month. Benoit-Olivier Groulx recorded two assists while Gravel recorded the 32-save shutout.

Halifax’s top line of Groulx, Lavoie, and Maxim Trepanier continue to be the straws that stir the drink for the Moose. The trio sit hold the top three positions in points on the team, with the next nearest player to them 17 points behind.

The Mooseheads did get a serious shot in the arm last night as Jared McIsaac returned to the lineup. The team’s top defenseman made his season debut following off-season shoulder surgery. The Detroit Red Wings prospect recorded an assist in his debut.

Injury-wise, the Islanders are still banged up with Lukas Cormier, Keiran Gallant, and Cedric Desruisseaux all out with various injuries. Forward Nikita Alexandrov is nearing a return from a lower-body injury, and could be available to the Islanders as soon as today. More information will be provided as soon as it’s made available.

Today’s Teddy Bear Toss is a big event on the holiday calendar for the Islanders. Bring your stuffed animals to the Eastlink Centre and when the Islanders score their first goal of the game, toss them on to the ice! All stuffed animals will be collected by the PEI Police Association to be donated to families in need across the island this holiday season.

Tickets are still available for today’s fun-filled day at the rink! Visit the Eastlink Centre box office, call 902-629-6625, or visit https://boxoffice.eastlinkcentrepei.com to get yours. Bring the whole family along for the fun; Get a family pack of 4 tickets for $40!