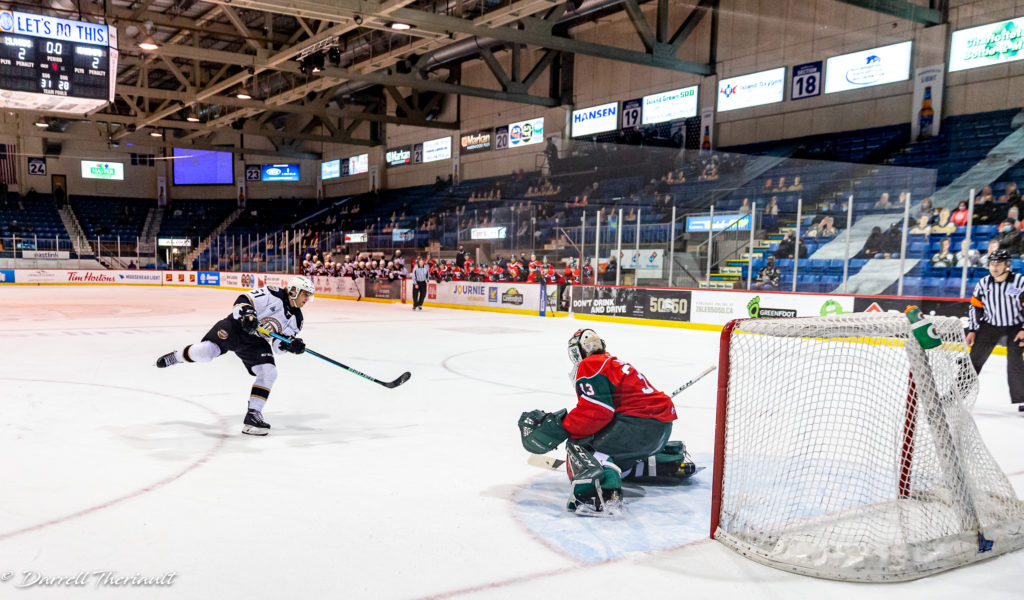 In a season rife with firsts, it surprisingly took the Charlottetown Islanders 34 games to achieve another first: A shootout.

Colten Ellis and Brady James stood tall between the pipes for their respective teams, backstopping their respective teams to the skills competition. Lukas Cormier scored the shootout winner as the Islanders defeated the Mooseheads 3-2 after five rounds of shooters, their 15th straight victory.

“The boys are doing an amazing job to not be satisfied,” said Cédric Desruisseaux, who scored twice in this game. “We’re always wanting to do more. Tonight wasn’t easy, we faced a lot of adversity with a lot of penalties and the shootout, but we all stayed calm and our maturity made the difference.”

While Desruisseaux is on a record-long point streak, he was actually also on a season-long cold streak; the 21-year-old hadn’t scored a goal in four games coming in to this one. With his natural ability, he was bound to find twine eventually and he did just that in the first period; Brett Budgell would find Desruisseaux with a perfect feed at the side of the net and he’d make no mistake on a gaping cage, tapping it in for his 36th goal on the season.

“I wasn’t really thinking about it; other players took the lead and were scoring,” said Desruisseaux on his small scoring slump. “I wasn’t stressed,  I know my potential so I kept doing my thing and was happy to score tonight.”

Penalty trouble would cost the Islanders once again as the Mooseheads would capitalize on their third opportunity of the period. Zachary L’Heureux has been one of the hottest Mooseheads as of late and he’d continue his streak, potting his 18th goal on the year, his third goal in his last two games.

Before the period was over though Desruisseaux would add his second of the game to give the Isles the lead. In the dying moments of the first, a Cormier point shot would take an odd bounce off the backboards and land right on Desruisseaux’s stick. He’d tuck it inside the post for a 2-1 lead heading in to the first intermission.

Penalties reared their head once again in the second; this time, however, it was a moment on the Charlottetown powerplay that cost them. A turnover in the neutral zone led to an odd-man opportunity for L’Heureux and he’d absolutely wire a wrister past Ellis, tying the game early on in the period.

From there, the two goalies would trade saves back and forth, keeping this game knotted up as emotions ran higher and higher. Ellis and James were on their game as both gave their team equal opportunities to win.

A final flurry in the overtime period yielded no results as the two netminders carried their success into the shootout. It took five rounds for a victor but Cormier would skate in with conviction, stop short and fire a wristshot over the glove of James to send the Eastlink Centre crowd home happy.

Ellis would make 26 saves for the victory while James made 29 saves in defeat. Cormier and Budgell would each pick up two assists on the Desruisseaux goals.

The Islanders and Moose won’t have to wait long to meet up at the Eastlink Centre again as they’ll face off on Wednesday night at 7:00pm. Season Ticket Holders are reminded to use their ticket for Home Game #18. You can also catch the game at any of our five viewing partners across Charlottetown and also on Eastlink Community TV Channel 10/610!