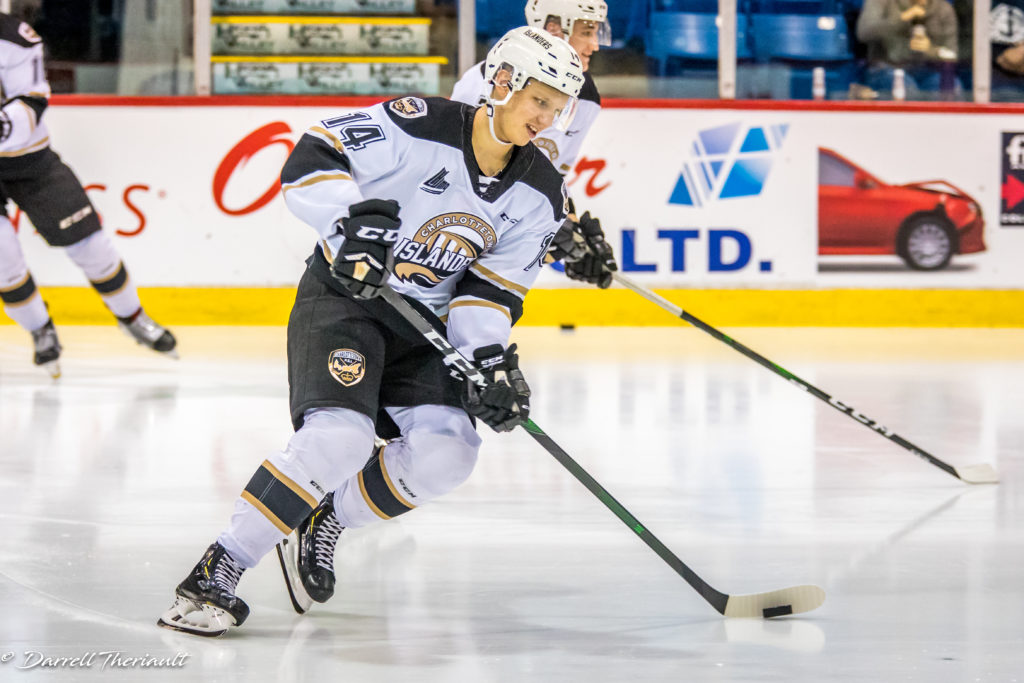 After a tough loss to the lowly Acadie-Bathurst Titan on Wednesday night, the Charlottetown Islanders must face a much taller task tonight when the nationally-ranked Chicoutimi Sagueneens come to town for their only visit this season.

The Islanders (22-15-5-0) couldn’t find a way to beat Titan starter Tristan Berube, who came up big with a 41-save performance en route to a 2-1 victory. Mark Rumsey recorded two assists for Bathurst, who have now defeated the Islanders twice this season. With the loss, Charlottetown slid down to 5th in the Eastern Conference standings, currently tied at 49 points with the Cape Breton Eagles.

Nikita Alexandrov recorded the lone Islanders goal in his return to the line-up following an outstanding World Junior Championships with Team Russia. The goal was Alexandrov’s first in the QMJHL since November 7th after a lower-body injury kept him out for a month prior to leaving for the World Juniors.

While Chicoutimi is stiff competition for the Isles, Charlottetown has defeated the Sags once already this season. Drew Johnston scored the game-winner while Jacob Goobie made 26 saves for the hard-fought 2-1 victory in Chicoutimi back on December 7th.

Unfortunately for Charlottetown, Johnston won’t be in the lineup to score against the Sagueneens again. The forward remains out with an upper-body injury. He won’t be the only Islander out of the lineup, as Cedric Desruisseaux joins Johnston and Keiran Gallant on the sideline this weekend. Desruisseaux took a hard hit in the second period of Wednesday’s game and will miss all action this weekend with an upper-body injury.

The news isn’t all bad for the Isles though, as Ethan Crossman makes his return to battle his former team. The 20-year-old veteran had been suspended for the past two games following a high hit on Saint John Sea Dogs forward Josh Lawrence. As the injury bug bites the Islanders once again, his presence will surely be felt in the lineup.

Meanwhile Chicoutimi (27-7-4-0) will have a much different looking team than the one that faced the Islanders back in December. The top team in the Eastern Conference made a number of shrewd moves to better position themselves for a run to the Memorial Cup, acquiring two of the league’s top players in Raphael Lavoie and Dawson Mercer, along with a pair of high-quality overagers in Felix Bibeau and Patrick Kyte. Three of the four players have made their Sagueneens debut; Mercer is expected to take some time at home over the weekend before reporting to the team next week.

The Sags are coming off a decisive 8-3 victory over the Halifax Mooseheads last night, a game in which Lavoie kicked off the scoring against his former team. Chicoutimi has now won three straight games and 7 of their last 10 overall.

Join us pre-game as we recognize Lavoie, Mercer, Alexandrov, and Gaetan Jobin for their participation in the 2020 World Junior Championships! It’s also Cyber Saturday; click HERE and use promo code NIKITA to get adult/senior tickets for just $14 and student/youth tickets for just $7! Tickets are also available at the Eastlink Centre box office and by phone at 902-629-6625!