Isles look to right the ship in Bathurst 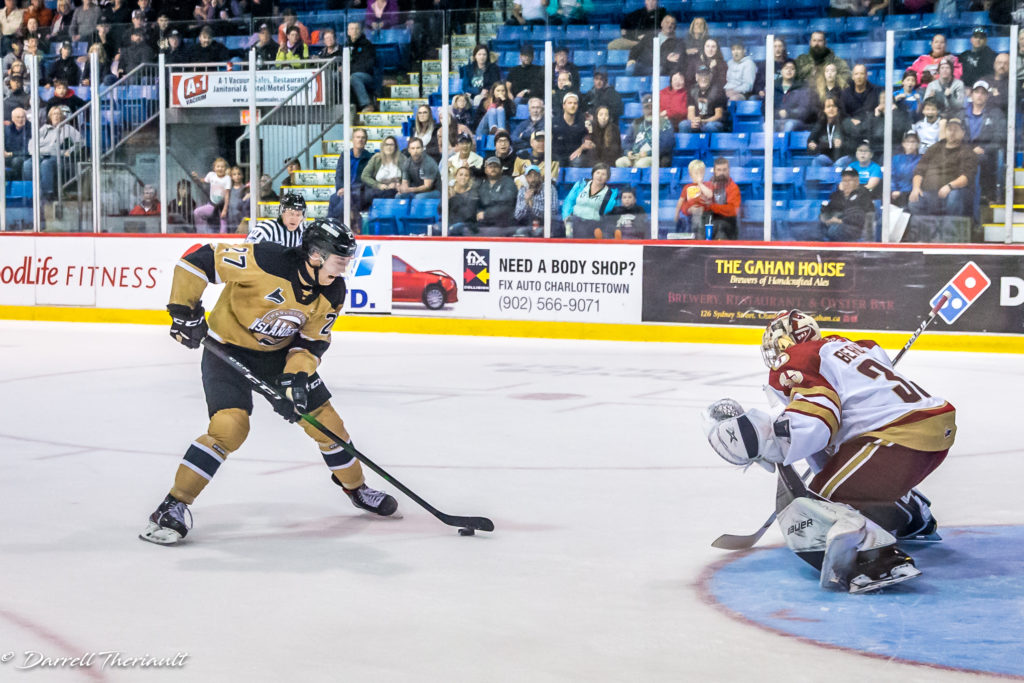 Following a 4-2 defeat to the Rimouski Oceanic less than a day ago, the Charlottetown Islanders hop on the bus and head across the Confederation Bridge to take on the Acadie-Bathurst Titan on Ocean 100’s Saturday Night Hockey.

The Islanders (10-4-3-0) have slipped as of late after a hot start, winning just once in their past four games. It’s a stretch that head coach Jim Hulton says will require the Isles to get back to their trademark identity as a team.

“I think we’ve gradually strayed away from what we believe our identity is.” said Hulton following last night’s game. “I don’t think we’ve seen our trademark forecheck and tenacity that our club is used to. We’ve played a lot of hockey, but so has everyone else. We have some guys who are slumping right now as well, but that’s par for the season.”

One player who hasn’t been slumping for Charlottetown is Nikita Alexandrov. The St. Louis Blues prospect has been on fire over the past few weeks, recording points in seven straight games including two goals last night. With twelve goals on the season, Alexandrov now sits tied for eighth in the QMJHL in that category.

Meanwhile the Titan (0-11-2-3) are still searching for their first win on the season and first win at the K.C. Irving Regional Centre in over a calendar year. They’ve played tighter hockey as of late but continue to be unable to crack the scoresheet, scoring more than two goals in a game twice in their past eight games.

One player that needs to be effective for the Titan to be successful is forward Anderson MacDonald. The two-time 25-goal scorer has the tools to be one of the lethal shooters in the QMJHL, however has been streaky to start the season. With six goals on the year he leads the Titan in goals, however, he’s scored just three times in his last ten games.

The Titan will be without one of their top rookies in Riley Kidney, who is joining Jacob Goobie and Oscar Plandowski out west for the 2019 World Under-17 Hockey Challenge.

In goal, Matthew Welsh gets the nod in back-to-back games. He made just 19 saves on 23 shots last night, so he’ll look to rebound with a strong performance tonight in Bathurst. At the opposite end, Tristan Berube has been stellar despite that lack of wins, posting a .900 save percentage through 13 appearances this season.

Don’t forget that all of tonight’s action can be heard on Ocean 100’s Saturday Night Hockey! Tune in to George Matthews and Cory Arsenault with the call!