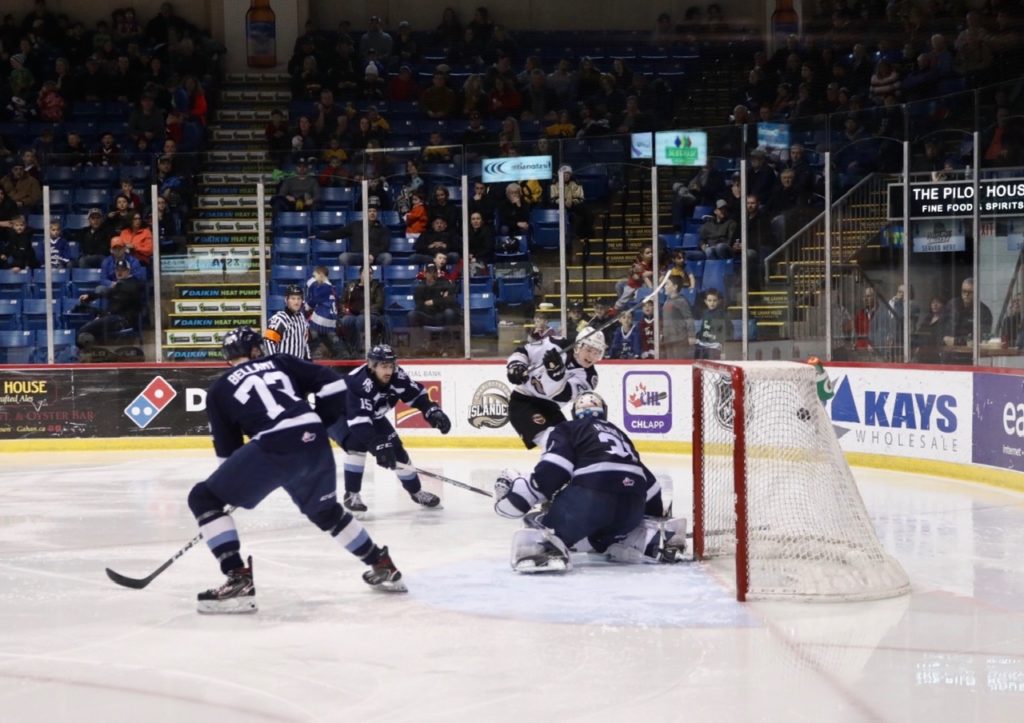 The Charlottetown Islanders almost made a Cinderella comeback on Saturday night. Unfortunately, the clock struck midnight before it could be completed.

The Isles scored three straight goals and almost tied it with seconds remaining, but a puck bounced over Nikita Alexandrov’s stick at the last moment, preserving a Sherbrooke Phoenix victory despite a complete, balanced effort from the Islanders.

“That’s definitely what this logo represents,” said Thomas Casey regarding the team effort against a nationally-ranked team. “We really showed what Charlottetown Islander hockey is tonight. If we keep playing like that on most nights, the puck will bounce the other way and we’ll usually get wins.”

The Isles would have had the victory if not for two goals called back in the first period. Casey put one past Phoenix starter Samuel Hlavaj early in the first and the goal light came on, but it was quickly called back as the puck actually went off the post. Shortly afterwards Cedric Desruisseaux put a puck past the Slovak netminder, however that one was called back for a high stick.

It would have been easy for the Isles to fold, but Casey said the team tried their best to stick to their guns.

“We knew we were playing well so we just tried to stay with it.”

Unfortunately, the CHL’s second-ranked team nationally flexed their muscles and started scoring. Anthony Munroe-Boucher got the goal-scoring started in the first period before Sherbrooke started pouring it on in the second. Two goals by Felix Robert and Israel Mianscum within two minutes early in the period pushed the Phoenix lead to 3-0 before Charles-Antoine Roy capitalized on the powerplay midway through the second to extend the lead to 4.

The puck luck finally bounced in favour of the Isles near the end of the period while shorthanded. A long pass attempt by the Phoenix hit Drew Johnston and the puck fell right in the lap of Zac Beauregard. The pesky forward made no mistake on the clear cut breakaway for his seventh of the season and the second shorthanded goal in as many nights for Charlottetown.

The Isles came out in the third with a bounce in their step and pushed the pace right from the outset. The momentum swing was palpable and it paid dividends early on; Casey would streak down the wing with a burst of speed before unloading a wrist shot that beat Hlavaj clean above the shoulder. For Casey, that would be his 21st goal on the year and third straight game with a tally.

Just minutes later, a relentless forecheck yielded more results; Ethan Crossman would force a turnover in front of the Phoenix net and Liam Peyton would get the shot off from the slot. The puck would bounce off Crossman and behind Hlavaj, giving Crossman his 10th goal on the year and pulling the Islanders within one.

Despite an onslaught and a number of chances late with the extra attacker, the Islanders couldn’t get it done. Samuel Poulin would add the empty netter to end the comeback in it’s tracks.

Johnston had two assists for the Islanders, while Peyton had the other assist in the game.

The outcome may not have been ideal, but Casey said the team feels itself turning the corner on what was a porous January.

“Everyone in the room is starting to believe in ourselves and I don’t think we had that belief before,” Casey explained. “We’re really bonding as a team and I think it’s starting to show on the ice; players are playing for each other and it’s really great to see.”

The Isles now head on the road for their final Quebec road swing of the season starting Friday night in Gatineau against the Olympiques. The next Ocean 100 broadcast is Saturday night as the Isles take on the Drummondville Voltigeurs. George Matthews and Norman Beck will have the call for you in that one!