Isles Powered To Victory By Offensive Outburst In Chicoutimi 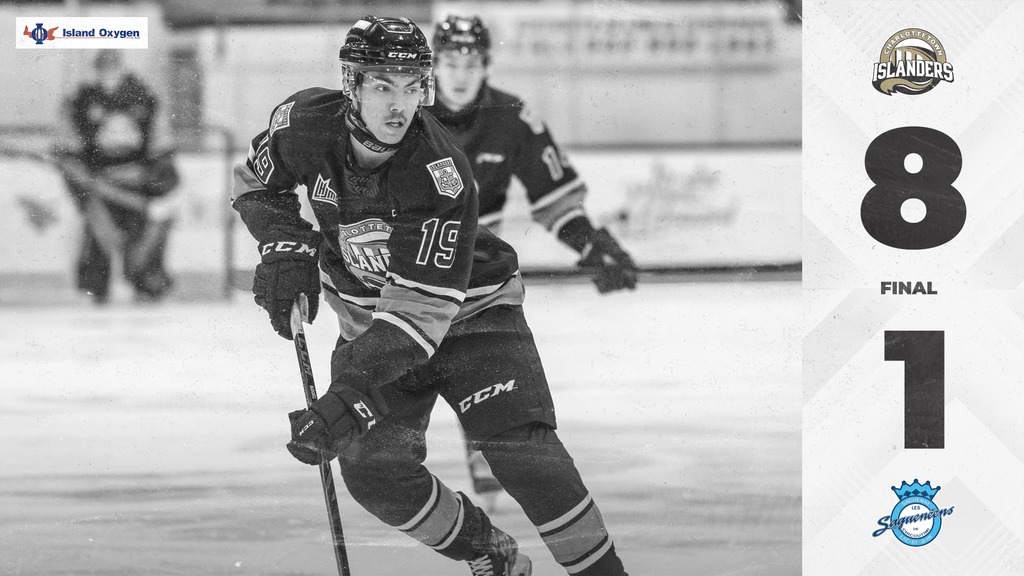 Kicking it off strong after such a long gap in play was important for the Islanders and their first-place standing but building momentum can be just as crucial. That would be the Isles goal when the puck dropped at 5 pm in Chicoutimi, get the win and get on a roll. Back-to-back games are not always beneficial but with the trade deadline additions still building the chemistry with their new team, it’ll be good to get adjusted sooner rather than later. Now, with Lukas Cormier and Xavier Simoneau getting in a groove quickly after yesterday’s stellar performances, spirits would be high in the locker room when they entered the Centre Georges-Vezina. Oliver Satny would be given the start in this one for his first appearance in 2022 being entrusted to shut down the Sagueneens.

It took a bit longer for Charlottetown to strike the board in this one after Cormier did it in just three minutes yesterday. The Isles were still able to break the ice in the first though as Xavier Simoneau potted his fifteenth of the year. Simoneau sniped one over the blocker shoulder of Sergei Litvinov right before the halfway point of the first to take the lead. Helpers on the opening tally were credited to Lukas Cormier and Oscar Plandowski. This stood to be the only marker of the period as Satny stopped all six shots that came his way.

Thirty-one seconds into the middle frame is when the Sagueneens managed to even this one up when Oliver Satny couldn’t make it across the crease in time to stop William Rouleau. Michael Pellerin and Jonathan Desrosiers were the helping hands on this one. This tie wouldn’t last long however as the floodgates opened quickly after as the Isles netted four goals in under three minutes. First off, it was Islanders captain Brett Budgell burying his first goal of the new year when he spun around quick out in front and was able to slide it past the pads of Litvinov. Assisting on Budgell’s sixteenth of the campaign were Xavier Simoneau and Oscar Plandowski. Next, thirty-one seconds later, it was Patrick Guay taking a drop-back pass from new linemate Dawson Stairs. Guay launched it from the slot over the shoulder of Litvinov for his 26th of the year. Stairs was the lone assist.

The Isles fourth gino of the game was finished off by Oscar Plandowski. Oscar finished off the cross-crease one-timer feed from Owen Saye for his fourth of the season and third point of the game. Saye and Patrick Leblanc were given the apples on this tally. Finally, to cap off the offensive onslaught was a powerplay goal from the league’s top goal-getter Patrick Guay. Guay buried a puck out in front of the net putting it top cheddar and giving Litvinov no chance to stop it. Helping hands were Brett Budgell and Jakub Brabenec.

Shots heavily favored the Isles 31-12 going into the final frame.

The final frame saw the Isles continue to add to their lead while shutting down the Sagueneens. At 8:02 into the period, Ryan Maynard sent a hard wrist shot on net from the point that beat Litvinov top corner for Maynard’s first gino of the year. Jakub Brabenec and Patrick Guay were the assisting men. Then Patrick LeBlanc added onto the Isles league-leading short-handed goals total when he broke in and snuck it between the arm and pad of Litvinov for his sixth of the season. We would have one more tally yet as Brett Budgell netted his second of the game with eighteen seconds left to cap off the Isles win at 8-1. Xavier Simoneau and Zachary Roy were the set-up men.

Final shots were 45-20 for Charlottetown.

The boys seem to be back in high gear now outsourcing their Quebec foes 12-2 in two days. Charlottetown becomes the first team in the QMJHL to reach the 50 point mark on the 2021-22 campaign. Now, the sights turn to Quebec City where the Islanders will go with revenge on the menu. Patrick Roy’s Quebec Remparts took the Isles down 4-1 when they came to the Eastlink Centre back on November 26th. Jim Hulton and his boys in black and harvest gold will look to return the favor when the puck drops at 8 pm Tuesday night at the Centre Videotron.