Isles trio of over-agers propel them to shutout over Moose 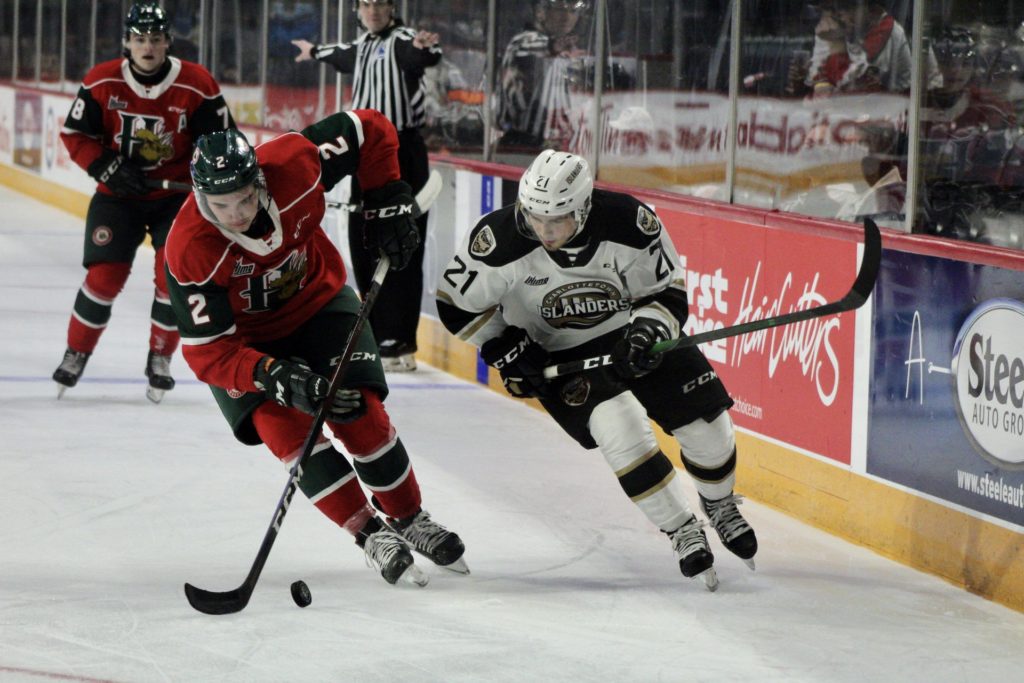 It’s official: Cedric Desruisseaux and Thomas Casey are on fire.

The 20-year-old wingers continue to play at a torrid pace to start the season. Desruisseaux and Casey each recorded yet another three points, including two goals, while Colten Ellis recorded his 12th career shutout and first as a Charlottetown Islander,  as the Charlottetown Isles defeated the Halifax Mooseheads 5-0 on Friday night.

“Tonight’s win was due in large part to to splendid games from our three over-age players,” said Islanders head coach Jim Hulton on his three most veteran players. “All 3 were outstanding from start to finish, leading the way to an impressive road shutout in a tough building.”

Noah Laaouan kicked off the offensive onslaught early in the first period. At the tail-end of a powerplay, the 19-year-old defender receives a pass from William Trudeau and he unloads a big one-timer, the puck getting over the shoulder of Mooseheads starter Cole McLaren. For Laaouan, that would be his first goal of the season, and Trudeau’s first point on the year.

Desruisseaux got in on the fun just four minutes later. After a great individual effort by Patrick Leblanc to bring the puck in to the Mooseheads zone, Desruisseaux would pick up the rebound at the side of the net and jam it past a stretched out McLaren for his sixth goal of the season.

Casey was next. On a powerplay midway through the period, Lukas Cormier would fire a well-placed shot from the point. Casey, the Charlottetown native, would get a stick on the shot and deflect it in to the net for his third goal of the season.

The Islanders would continue their relentless pressure in the second period, overpowering the Mooseheads at every point of the game. Desruisseaux would take over the QMJHL scoring lead early in the second period, finishing off a 3-on-1 passing play with Casey and Brett Budgell to make the game 4-0.

Casey would put the game on ice in the third period, being sprung on a clean breakaway and going top corner on Mooseheads rookie Brady James, who entered the game in place of McLaren to start the third period, to give the Islanders the 5-0 score.

Budgell would finish the game with two assists, while Cormier, Leblanc, Trudeau, and Sam Oliver would each record single assists. Ellis made 25 saves for the shutout, moving him into a tie for 12th in QMJHL history in that category.

Hulton also noted the effectiveness of his team’s special teams. The powerplay struck twice, while the penalty kill kept the Mooseheads off the scoresheet on 8 attempts.

“Our special teams were the difference in the game as both units excelled.” Hulton said.

Sunday’s scheduled game against the Moncton Wildcats has been postponed due to COVID-19 restrictions in Moncton. Our next game will be our home opener on Friday, October 23rd against the Saint John Sea Dogs. Follow along across our social media for all the ways you can catch the game outside the Eastlink Centre!