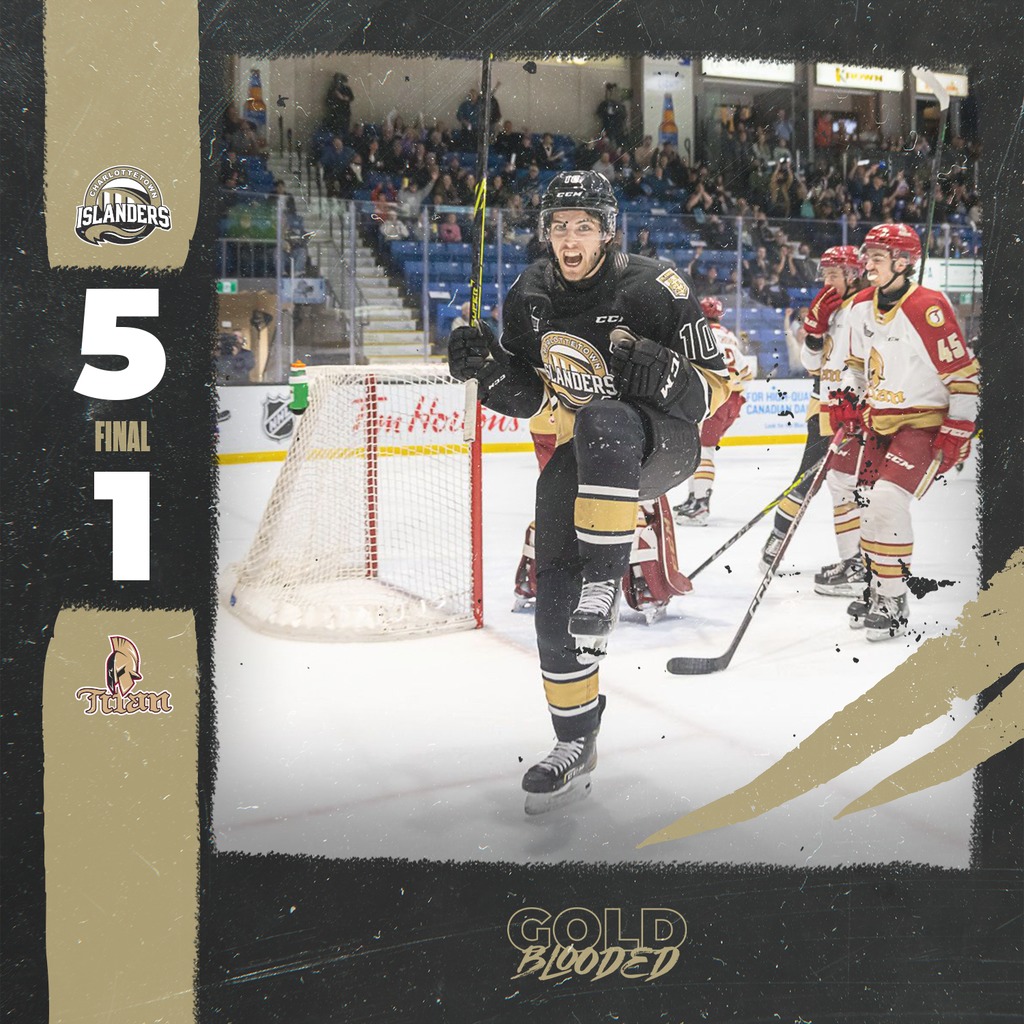 Even after a big showing that resulted in a win last night for the Islanders, the pressure was even more intense before they stepped on the ice tonight. Taking a 2-0 series lead across the bridge for game three would be huge and the Isles have every opportunity to do that tonight against a Bathurst team that must be even tired than they were prior to yesterday’s game. The energy was high in the locker room too, the win last night mattered for just a few hours before the focus was turned right around to game two. Everyone understood that at this point in the year, it’s all about rest, which meant you take the games as quick as you can to extend the break between rounds. The Isles momentum and energy should be even higher than yesterday’s even as they stared down a back-to-back to open the series. When the puck dropped at 7 pm, it was clear that Jim Hulton made the message clear in that locker room, get the fans going early and the pucks in deep.

Surprisingly, the Titan came out much faster than they did last night. They managed to get the pucks in deep and control a lot of the play in the Isles end early on making Franky Lappena a busy man early into the game. Lappena took his first test of the playoffs well as he stopped all 14 Titan shot attempts in the opening frame. The Isles did show a lot of pushback though not allowing the Titan to roll over them in the first. The Islanders were the first team to strike the board as well when they went on the man advantage. The first unit was able to cash in this time on the powerplay when Brett Budgell got his twig on a Guay shot and redirected it past the blocker side of Bednar for his third of the post-season. Patrick Guay and Lukas Cormier were credited with the game’s opening tally. The ice evened out after that marker as the Isles pace of play increased, and they waited for the Titan’s legs to once again get tired and slow down their tempo.

The Titan held the lead in shots at 14-9 after one.

The Islanders followed yesterday’s game plan almost perfectly as they came out of the first intermission ready to take this game away from the Titan. It only took them 4:19 into the middle frame to get on the scoreboard when Simoneau made a nice between the legs tip to direct the puck on net. Bednar was able to kick aside the Simoneau redirect but there was Zachary Roy to clean up the loose change and snap it just inside the left post for his third of the playoffs and it put us up 2-0. The helping hands were Xavier Simoneau and Patrick Guay. Then, at 7:18, Patrick Guay was able to take advantage of a Titan defender without a stick and break in all alone just inside the blueline. Guay faked out Bednar and snapped it between his legs to put us up 3-0. The tally was assisted by Ryan Maynard and Jakub Brabenec. Finally, just seconds later to cap off another big second period for the Isles, our captain picked up his second tally of the game. Brett Budgell took a sweet saucer pass from Simoneau and he whips it top cheddar past the glove of Bednar from the left side of the ice. The helpers on the tally were Xavier Simoneau and Jeremie Biakabutuka. The Islanders held onto their big 4-0 lead after two periods and looked to carry it home in the final frame.

Shots still favored the Titan at 25-20 after forty.

The second period proved to be enough to propel the Isles to another victory in this one but there was still some action to be seen in the third period. At 3:21, Patty Guay recorded his second goal of the game when he cleaned up his own rebound and swung around the back of the net, completing the wrap-around attempt on the backhand with Bednar nowhere to be seen. Dawson Stairs and William Trudeau were credited with the apples on the play. The Titan were able to manage one goal in the game, and this time, they actually scored it themselves. Ben Allison took a nice cross-ice feed and redirected it just inside the right post on the powerplay to make it a 5-1 game. Picking up the helpers were Miguel Tourigny and Hendrix Lapierre. The final score stood to be 5-1 in game two as the Islanders were beginning to run away with this series.

Final shots on net were 31-30 for the Islanders.

“I think we can enjoy the game two win, we’re in the situation we wanted to be in at the start of this series up 2-0. It’s a great feeling but we have to make sure we’re sharp for the road game.” Patrick Guay said about how it feels to be up 2-0 and how the team feels with the lead.

“It was a great game, I thought we played solid all around. First period was a little slow but it was great to get the win. Like we saw in the last series they came back from down by two so we have to reset here and turn the page and bring it to them in Bathurst on Thursday night.” Brett Budgell said on how it feels to take a 2-0 series lead.

After a strong first period, the Titan quickly wore themselves out and were no-shows for pretty much the remainder of the game. Jim Hulton was also once again able to fire his squad up in the first intermission as the Isles came out and used a dominant second frame to propel them to victory. Now, the Islanders have a commanding 2-0 series lead and look to be in the process of taking out the Titan. However, never count your chickens before they hatch as the Titan have two days off now to rest, as well as having home ice for the next two games and they recently came back from a 2-0 deficit to win 3-2 over the Mooseheads in round one. You can bet that the Islanders won’t be giving any ground to them though without a fight no matter what barn they’re in. Game three goes this Thursday when the puck will drop at 7 pm at the K.C. Irving Centre in Bathurst.

“Well, we’re going to enjoy the situation we are in. We worked hard to get the two wins here on home ice and we know that the mountain gets steeper on the road but we’re also confident that with two days of rest we will apply the same formula that we have used on the road most of the season. We’ve been a really good team on the road and we’re just overall, feeling pretty good about ourselves right now.” Jim Hulton said on the feeling in the locker room after a big game two win.