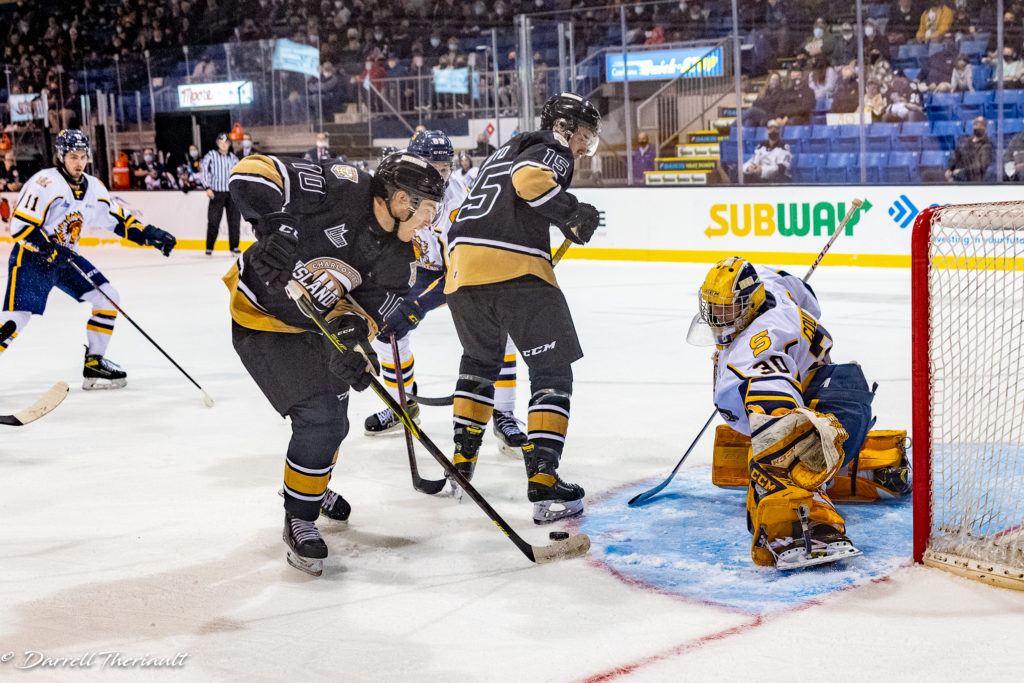 Heartbreak, the only word to describe the emotion of game two’s overtime loss. After seemingly sealing up a 3-2 victory, an odd series of events led to Xavier Simoneau receiving a two-minute minor for a face-off violation. The call was controversial, to say the least. At that point in the game, and after not having any other call made in the final frame, with one minute left on the clock, the linesman of all people made the call and sent Simoneau to the box. I’ve watched hockey all my life, and as Simoneau himself put it, I’ve never seen that call before in all those years. Let alone a call like that in a game/moment of that magnitude. Personally, I believe a face-off violation should never result in a penalty, as I’m sure many people agree. No matter what team you cheer for or league you watch, at any moment a face-off violation occurs, the officials should just reset and re-do the draw.

Anyway, the events happened and Shawinigan ends up winning the game as we all know now. As sports fans and Islanders fans we love to tear people apart especially the officiating when events like that happen but it’s time to move on. It happened, no one can change that, and now the Isles and their fans must move on and focus on game three and climbing out of the hole that is being down 2-0 in this best-of-seven President Cup finals.

“I think the best thing that happened is that we had a couple of days off. There was time to flush the system of the emotion and get our focus back where it needs to be. The biggest message is that sequence of events didn’t cost us the series, it’s only 2-0. It wasn’t in a deciding game so we just have to move on from it and use the controversy or adversity to fuel our fire even more to steal these games.” Jim Hulton said when asked if the emotion of game two’s ending had passed yet.

The road ahead to force the series back to Charlottetown is not an easy one. Dropping the first two games at home and then having to head on the road for crucial games in three and four. The Isles have been outstanding though on the road and especially in Quebec this season. They hold a 10-1-1 record in Quebec and are 2-0 there in the playoffs.

“The guys are ready, I think what we’ve done is that our body of work has built a confidence that is extremely high. We’ve got a lot of family and friends that are in the building and that support has carried all year and will continue to do so again tomorrow.” Jim Hulton said when asked if he thinks the Isles impressive road play will continue tomorrow.

As I said the challenge that lies ahead is not an easy one. Shawinigan will have their home barn filled with fans making it a tough environment to steal away the next two games. In the end though if the Islanders can bring their same level of energy from game two and even more into these next two games, their skill will prevail. They were undoubtedly the better team in game two after struggling in game one and a win was surely robbed from them. Jim Hulton isn’t worried about the challenge though, he knows his squad is ready for what lies ahead.

“Absolutely they’re ready. There is a real sense of focus in the group today especially when we had our practice. They know exactly what is at stake and what the moment requires.” When asked if the team understands and is ready for the challenge ahead, Jim Hulton said that.

With the team understanding the mountain that sits in front of them, what has their focus been on exactly in practice to prepare for these two games coming up? Here’s what Hulton had to say on that.

“Well, we have to build on our performance. We did a lot of good things in game number two, we were significantly better in all areas. We have to continue to make improvements in our five-on-five game and the biggest thing is our special teams. They have been a staple of our success all season and the obvious answer is our penalty kill has to be better. We gave up five goals on seven chances and we can’t continue at that pace so there was a lot of time spent on that.”

The final question I had for Jim was a simple one, take us into that locker room ahead of puck drop tomorrow. What will the message be to your team in order to get them ready to go out and get a big game three win?

“Just go win a game. It doesn’t change from our focus all season long, we focus on the task at hand. We know what’s required, I think the biggest thing that we’ll mention is to come out strong in the first ten minutes in a hostile environment. This group thrives in these types of settings, they’re not intimidated like a lot of teams are, not this group. So we’re looking forward to it.”

The Islanders are fully ready to take two wins home from Shawinigan and come back home with the series tied at two. Both coaches have been playing this series like it’s going to go the distance and I can fully see it doing so now. Admitted I was a little skeptical after game two because of the impact the game had on all of us fans, but Jim has had so many years of success in coaching because of how he can command a team’s faith in him and their game. By god did he do it again too because I believe in Jim, and I believe in the Islanders! So wherever you’re watching tonight’s game from, be confident in our boys in black and harvest gold and get loud because they have to hear you all the way up in Shawinigan.

Mark my words folks, we haven’t seen the last hockey game of the post-season at the Eastlink Centre yet!

Oscar Plandowki is a game-time decision this evening with a lower-body injury.

The puck drops on game three tonight at 8 pm in Shawinigan, you can catch the action on TSN.